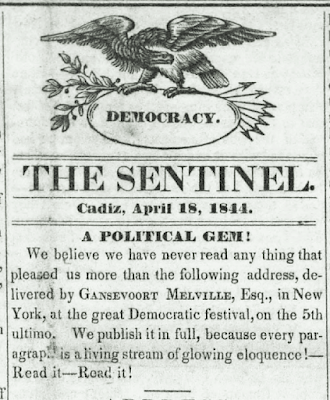 "a beautiful composition, full of energy and feeling."

The Waterloo notice closes with the climax, Gansevoort's elaborate figure of "the sun of Truth" that overcomes every opposition.

NEW YORK CELEBRATION.-- The celebration of the Jackson Jubilee in New York was truly a splendid affair. Nearly a thousand ladies were present. The oration, by GANSEVOORT MELVILLE, is a production not easily excelled. It is a beautiful composition, full of energy and feeling. We copy its close, and may justly remark, that it contains many passages of equal beauty. Every democrat will respond to these sentiments:


Let us, then, from this moment henceforth, vow to go into this coming Presidential canvass with the stern resolve to do our duty--in the largest and widest sense of the term, and let the consequences take care of themselves. If we do this--if we fight this battle as it should be fought, with honesty, abiding energy, and an enthusiasm tempered by a cool, calm courage, we will triumph. Do this, and even if we fail, we will have no cause for self-accusation. And whatever the result, we have one consolation vouchsafed to us and denied to our opponents; and that is, that the sun of Truth can never set--the mists of prejudice may arise and obscure its rays--the clouds of error intervene and hide its beams--the tempests of faction and party hate shut out its genial and life-bestowing heat; but the mists will arise--the clouds will pass away--the tempest roll on and be forgotten, while the sun, the brighter and dearer for his temporary obscurity, will shine on as he shone of yore--to brighten, to gladden, to vivify and to bless. It is so in the physical world--so in the moral--so in the political.-- Truth can never die. And those political principals which we uphold--in which we live, and for which we are willing to die, will widen and deepen, extend and exist for ever.

Gansevoort's Address made the Demos go crazy in Cadiz. On April 18, 1844 the Cadiz Sentinel printed the whole thing, introduced in terms of truly unqualified praise:

We believe we have never read any thing that pleased us more than the following address, delivered by GANSEVOORT MELVILLE, Esq., in New York, at the great Democratic festival, on the [1]5th ultimo. We publish it in full, because every paragraph is a living stream of glowing eloquence!--Read it--Read it!


"to pronounce an address before the Democracy of the city of New York on the 15th inst, the Anniversary of the birthday of Andrew Jackson."

Posted by Scott Norsworthy at 8:29 AM