in the 1837 Catalogue of Books in the Library of the Young Men's Association of the City of Albany (under "H," page 14), this 1824 "Anthology of British Poets," as described online for 21st century readers by the British Library, "brings together past and contemporary poets" including Wordsworth, Coleridge, Southey, Byron, Keats, and Shelley.

"A Critical List of Authors" in the 1824 volume includes "Critical Remarks" (thus labeled on the title page) by William Hazlitt on Wordsworth:

Mr. WORDSWORTH'S characteristic is one, and may be expressed in one word;—a power of raising the smallest things in nature into sublimity by the force of sentiment. He attaches the deepest and loftiest feelings to the meanest and most superficial objects. His peculiarity is his combination of simplicity of subject with profundity and power of execution. He has no fancy, no wit, no humour, little descriptive power, no dramatic power, great occasional elegance, with continual rusticity and baldness of allusion; but he is sublime without the Muse's aid, pathetic in the contemplation of his own and man's nature; add to this, that his style is natural and severe, and his versification sonorous and expressive.  --Select British Poets 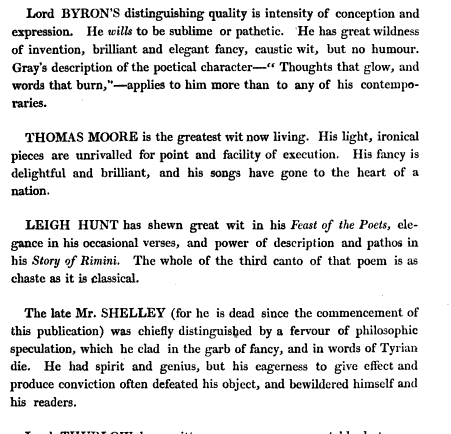 Lord BYRON'S distinguishing quality is intensity of conception and expression. He wills to be sublime or pathetic. He has great wildness of invention, brilliant and elegant fancy, caustic wit, but no humour. Gray's description of the poetical character—"Thoughts that glow, and words that burn,"—applies to him more than to any of his contemporaries.

THOMAS MOORE is the greatest wit now living. His light, ironical pieces are unrivalled for point and facility of execution. His fancy is delightful and brilliant, and his songs have gone to the heart of a nation.

LEIGH HUNT has shewn great wit in his Feast of the Poets, elegance in his occasional verses, and power of description and pathos in his Story of Rimini. The whole of the third canto of that poem is as chaste as it is classical.

The late Mr. SHELLEY (for he is dead since the commencement of this publication) was chiefly distinguished by a fervour of philosophic speculation, which he clad in the garb of fancy, and in words of Tyrian die. He had spirit and genius, but his eagerness to give effect and produce conviction often defeated his object, and bewildered himself and his readers.  --Hazlitt, Select British Poets

Mr. KEATS is also dead. He gave the greatest promise of genius of any poet of his day. He displayed extreme tenderness, beauty, originality and delicacy of fancy; all he wanted was manly strength and fortitude to reject the temptations of singularity in sentiment and expression. Some of his shorter and later pieces are, however, as free from faults as they are full of beauties. --Hazlitt, Select British Poets

Available in Albany by October 1826, Hazlitt's edition might have given Herman Melville his earliest exposure to works by major Romantic poets including Wordsworth, Shelley, and Keats. And thumbnail criticism thereof, in Hazlitt's "Critical Remarks." Melville lived in Albany, New York from October 1830 to May 1838. He joined the Young Men's Association in January 1835 and "managed to keep paying his membership dues for two and a half years," as discussed by Hershel Parker in Melville: The Making of the Poet (Northwestern University Press, 2008), page 39. In September 1827 (three years before Herman had to move there), Albany bookseller Oliver Steele advertised "Hazlitt's select British poets, with critical remarks" and other "LONDON BOOKS" for sale in his shop at 437 South Market Street.

Oliver Steele definitely had the 1824 edition with contemporary poets, as shown by the reference in his ad to Hazlitt's "critical remarks," a phrase borrowed from the title page. Oliver's father Daniel Steele had offered the same edition the year before, as the specifics of his ad in the Black Rock Gazette (October 5, 1826) more clearly reveal: 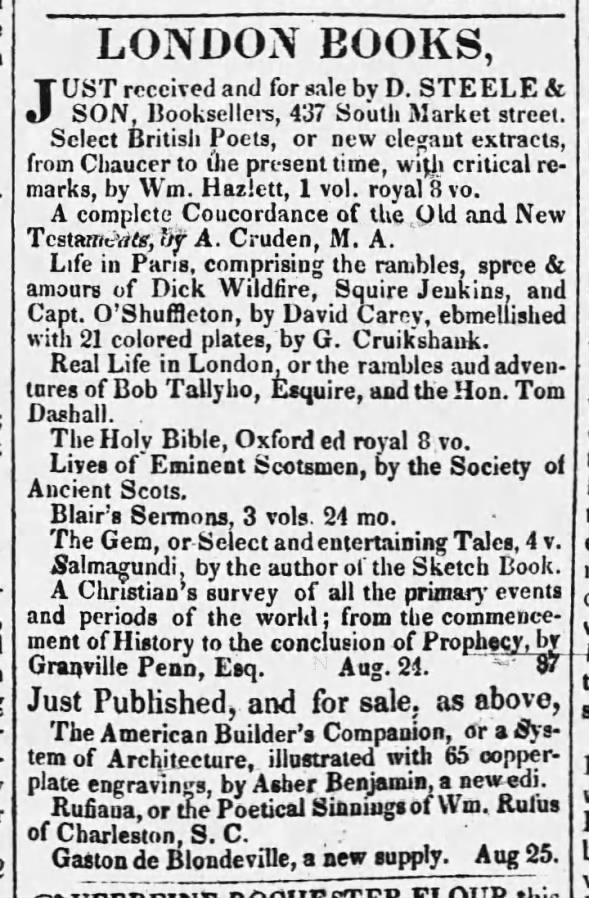 Daniel Steele "kept the largest and best assortment of books outside of New York City" according to George Rogers Howell in  the Bi-centennial History of Albany:

Among the earliest booksellers in Albany are William Seymour; D. K. Van Vechten; Obadiah Penniman, who came to Albany under the great printer, Isaiah Thomas; C. R. & G. Webster; E. & E. Horsford, who kept a store at 100 State street, closed about 1828; E. F. Backus, who made a specialty of law books; Daniel Steele & Son, on Broadway, north of Hudson avenue, who kept the largest and best assortment of books outside of New York City. Daniel Steele died in 1828, and was succeeded by his son, Oliver.

In addition to "Hazlett's Select British Poets," the Catalogue of Books in the Library of the Young Men's Association (Albany, 1837) lists two different sets of "British Poets," numbered 1112 (12 vols.) and 1390 (11 vols.). Here is the Google-digitized volume of Hazlitt's 1824 anthology from NYPL, courtesy of HathiTrust Digital Library.

Posted by Scott Norsworthy at 8:40 AM