· Wed, Mar 15, 1797 – Page 4 · Poughkeepsie Journal (Poughkeepsie, New York) · Newspapers.com
Esteemed as "a man of genius," Andrew Billings reportedly invented a pair of wings that worked for him but not his father-in-law James Livingston:


Major Billings was no ordinary man: nay more, he was a man of genius. Independent of his talents as a soldier and writer, he possessed great mechanical invention. He constructed a pair of wings, and, being a small man, actually succeeded with them in flying short distances. Relative to this matter a story is told by B. Davis Noxen, Esq., the celebrated lawyer of Syracuse, and formerly a resident of Poughkeepsie. Major Billings gave notice that he intended trying his wings at a certain hour in the market place of the village. The inhabitants assembled; he mounted a low pillar, extended his wings, and, to the amusement of the village, flew to a considerable distance. Sheriff Livingston, thinking to "follow in the footsteps" of his son-in-law, then mounted the pillar, fitted the wings and sprang. Being, however, a heavy man, and not knowing the trick of waving his pinions, he tumbled ingloriously to the dust, amid the laughter of his townsmen.  --Albany Evening Journal, May 25, 1864

· Wed, May 26, 1824 – Page 4 · Poughkeepsie Journal (Poughkeepsie, New York) · Newspapers.com
After the death of Henry Livingston, Jr. in 1828, Edwin and his brother Sidney were able to serve as executors for the estate. Henry's "good friend" Randall Sanford Street had also been named in the will as one of the executors:


"I name and appoint as executors of this my last Will and Testament my beloved wife, Jane, my 3 sons Charles, Sidney & Edwin and my good friend Randal S. Street Esq."
--Will of Henry Livingston Jr, transcript via Mary S. Van Deusen's Henry Livingston site

T. W. C. Moore stayed in touch with grown children of his cousin Cornelia Billings and Randall S. Street, as revealed in a note Moore wrote about a curious gift he got from one of Cornelia's sons, William Ingraham Street (1807-1863). After Street gave Moore souvenir locks of George Washington's (and Martha's) hair, T. W. C. meticulously recorded the provenance in a written statement made in New York City, dated March 24, 1857:

The locks of hair below is part of that which was sent to Major Billings of Poughkeepsie, inclosed in a letter, of which the following is an exact copy. The original is in possession of the Major's grandson, W. J. Street, counselor at law, of this city, who gave me the hair.

Inveterate antiquarian that he was, T. W. C. Moore also took the trouble to make "an exact copy" of the authenticating letter from George Washington to Andrew Billings, at the time still owned by William I. Street (whose middle initial "I" for Ingraham or Ingram was sometimes misprinted as "J"). Transcribing Moore's 1857 note in The Century Magazine for May 1890, Edith Robertson Cleveland calls it "an odd affidavit of the present of two locks of hair from the heads of Mr. and Mrs. Washington, with the hair itself curiously preserved."

Speaking of Poughkeepsie Streets, William I. Street's brother Alfred became a poet of considerable repute in Herman Melville's time. In the 1840's, Alfred Billings Street had a law office in Albany. Somehow he knew Herman's sisters. Once in Pittsfield, Alfred B. Street felt hurt when Herman did not ask him over to Arrowhead for a social visit. Hershel Parker tells all about it in the second volume of Herman Melville: A Biography (Baltimore: Johns Hopkins University Press, 2002), page 139. That was in late September 1852. Twenty-five years later Melville highly complemented one of Street's poems, in a letter to his cousin Kate and her husband Abraham Lansing:


... I have just been reading in a copy of Frank Leslie's Illustrated paper "The Old Garden" by Mr Street. How beautiful, and poetically true to nature it is! It is like a flower-and- fruit piece by some mellow old Fleming.  --Herman Melville, August 14, 1877 letter to Catherine Gansevoort Lansing and Abraham Lansing; reprinted in the Northwestern-Newberry Edition of Melville's Correspondence, pages 459-463.

Melville's comparative view of the poet as painter, "some mellow old Fleming," echoed the tribute by Henry T. Tuckerman thirty years before. In a friendly review of the 1845 volume The Poems of Alfred B. Street, Tuckerman had praised Street as "a true Flemish painter":


We have wandered with him on a summer's afternoon, in the neighborhood of his present residence, and stretched ourselves upon the greensward beneath the leafy trees, and can therefore testify that he observes con amore, the play of shadows, the twinkle of swaying herbage in the sunshine, and all the phenomena that makes the outward world so rich in meaning to the attentive gaze. He is a true Flemish painter, seizing upon objects in all their versimilitude. As we read him, wild flowers peer up from among brown leaves; the łoń. the partridge, the ripple of waters, the flickering of autumn light, the sting of sleety prow, the cry of the panther, the roar of the winds, the melody of birds, and the odor of crushed pine-boughs, are present to our senses. In a foreign land, his poems would transport us at once to home. He is no second-hand limmer, content to furnish insipid copies, but draws from reality. His pictures have the freshness of originals. They are graphic, detailed, never untrue, and often vigorous; he is essentially an American poet. --Unsigned notice of The Poems of Alfred B. Street [by Henry T. Tuckerman] in The United States Magazine and Democratic Review for January 1846.

In this 1901 obituary of Alfred's sister Frances Mary Street, the highest honor the writer could think to bestow on her late brother the poet was to make him "a contemporary and friend of Longfellow." 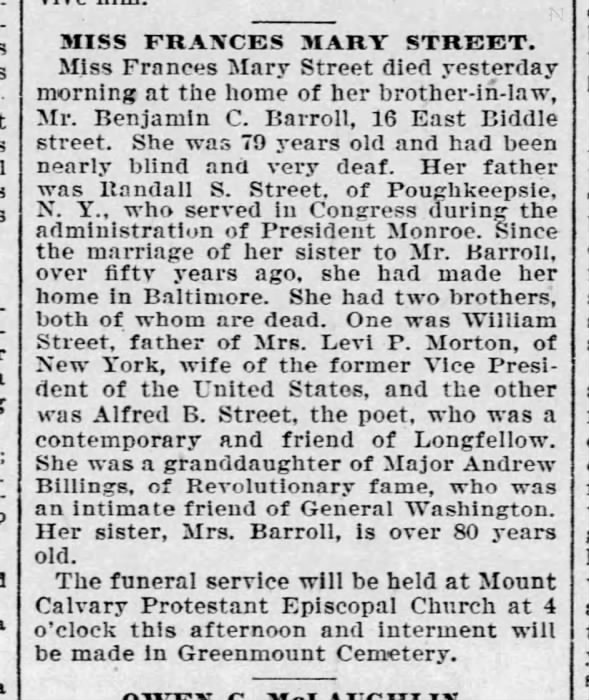 
The Hon. Randall S. Street, father of the author of " Frontenac," was the lineal descendant of these two eminent clergymen. He removed, with his father, in early life, into the State of New York, and this branch of the family has continued to reside there ever since; the other branch continued in Connecticut, and is still represented by Augustus Russell Street, Esq., who resides at Newhaven. Randall S. Street studied law at Poughkeepsie, married Miss Cornelia Billings, and settled there for the succeeding thirty years of his life. Such was his standing at the bar, that whilst still young, he was appointed attorney of the district composed of the counties of Wayne, Ulster, Dutchess, Delaware and Sullivan, under the old organisation of districts, and subsequently he represented the county of Dutchess in Congress. He was an eminent lawyer and accomplished gentleman, and among the recollections of the writer, is one of a day spent more than thirty years ago at the residence of General Street, when it was the home of hospitality and elegance. In 1824, General Street removed to Monticello, Sullivan county, New York, where he died in 1839.

The maternal grandfather of our author was Major Andrew Billings, who married Cornelia, daughter of James Livingston, of the well known family of that name in New York. Cornelia, the daughter by this marriage, who became the wife of General Street, was the mother of the poet....

Posted by Scott Norsworthy at 9:44 AM