Herman Melville's friends held Clement C. Moore in high regard. As shown in an earlier post, Evert A. Duyckinck honored the author of "A Visit from St. Nicholas" as

Writing in 1866 for The Atlantic Monthly, Henry T. Tuckerman counted

among his most cherished reminiscences of Broadway in New York City. Other departed friends that Tuckerman remembered in the same class of "endeared figures and faces" were Dr. John W. Francis and Charles Fenno Hoffman. Melville knew them, too, when he lived in New York City. 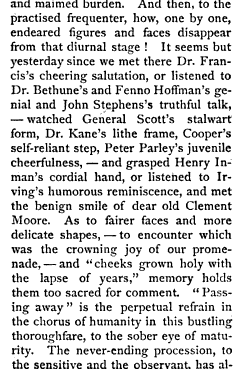 And then, to the practised frequenter, how, one by one, endeared figures and faces disappear from that diurnal stage! It seems but yesterday since we met there Dr. Francis’s cheering salutation, or listened to Dr. Bethune’s and Fenno Hoffman's genial and John Stephens’s truthful talk,—watched General Scott‘s stalwart form, Dr. Kane’s lithe frame, Cooper’s self-reliant step, Peter Parley’s juvenile cheerfulness, — and grasped Henry Inman’s cordial hand, or listened to Irving’s humorous reminiscence, and met the benign smile of dear old Clement Moore. As to fairer faces and more delicate shapes,—to encounter which was the crowning joy of our promenade,—and “cheeks grown holy with the lapse of years,” memory holds them too sacred for comment. “Passing away” is the perpetual refrain in the chorus of humanity in this bustling thoroughfare, to the sober eye of maturity. The never-ending procession, to the sensitive and the observant, has also infinite degrees of language. Some faces seem to welcome, others to defy, some to lower, and some to brighten, many to ignore, a few to challenge or charm,—as we pass. And what lessons of fortune and of character are written thereon,—the blush of innocence and the hardihood of recklessness, the candid grace of honor and the mean deprecatory glance of knavery, intelligence and stupidity, soulfulness and vanity, the glad smile of friendship, the shrinking eye of fallen fortune, the dubious recognition of disgrace, the effrontery of the adventurer, and the calm, pleasant bearing of rectitude,—all that is beautiful and base in humanity, gleams, glances, and disappears as the crowd pass on.
--Henry T. Tuckerman, "Through Broadway" in The Atlantic, Volume 18

Posted by Scott Norsworthy at 12:41 PM