Daniel Webster on the Bunker Hill Monument as orator


WHEN the great defender of the Constitution delivered the oration at Bunker Hill, he pointed to the just completed monument and exclaimed, “There stands the Orator of the Day.”  --Reminiscences of Printers, Authors, and Booksellers in New-York

Dr. Francis paraphrased and condensed, making one great line out of the well-known passage in which Webster personified the Bunker Hill Monument as "itself the orator of this occasion." As reported by Richard Frothingham and painted in oil by an unknown hand, Webster dramatically gestured to his superior when he said,


"The powerful speaker stands motionless before us."

Herman Melville made a similarly humble move when he dedicated Israel Potter to the Bunker Hill Monument: 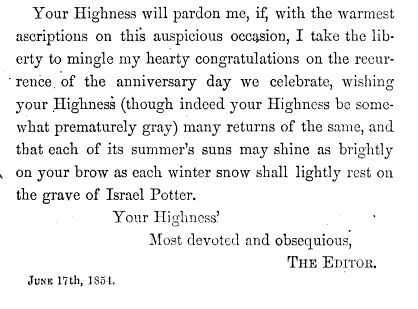 Your Highness will pardon me, if, with the warmest ascriptions on this auspicious occasion, I take the liberty to mingle my hearty congratulations on the recurrence of the anniversary day we celebrate, wishing your Highness (though indeed your Highness be somewhat prematurely gray) many returns of the same, and that each of its summer's suns may shine as brightly on your brow as each winter snow shall lightly rest on the grave of Israel Potter.

Your Highness'
Most devoted and obsequious,
THE EDITOR.

For background and context, here is a fuller selection from Daniel Webster's 1843 Address, his second Bunker Hill oration. (The first of Webster's famous Bunker Hill Monument speeches was delivered on June 17, 1825 at laying of the corner-stone of the Bunker Hill Monument at Charlestown, Massachusetts.) The text of the 1843 speech would have been available to Melville in (for one example) the first volume of The Works of Daniel Webster (Boston, 1851).


The Bunker Hill Monument is finished. Here it stands. Fortunate in the high natural eminence on which it is placed, higher, infinitely higher in its objects and purpose, it rises over the land and over the sea; and, visible, at their homes, to three hundred thousand of the people of Massachusetts, it stands a memorial of the last, and a monitor to the present and to all succeeding generations. I have spoken of the loftiness of its purpose. If it had been without any other design than the creation of a work of art, the granite of which it is composed would have slept in its native bed. It has a purpose, and that purpose gives it its character. That purpose enrobes it with dignity and moral grandeur. That well-known purpose it is which causes us to look up to it with a feeling of awe. It is itself the orator of this occasion. It is not from my lips, it could not be from any human lips, that that strain of eloquence is this day to flow most competent to move and excite the vast multitudes around me. The powerful speaker stands motionless before us. It is a plain shaft. It bears no inscriptions, fronting to the rising sun, from which the future antiquary shall wipe the dust. Nor does the rising sun cause tones of music to issue from its summit. But at the rising of the sun, and at the setting of the sun; in the blaze of noonday, and beneath the milder effulgence of lunar light; it looks, it speaks, it acts, to the full comprehension of every American mind, and the awakening of glowing enthusiasm in every American heart. Its silent, but awful utterance; its deep pathos, as it brings to our contemplation the 17th of June, 1775, and the consequences which have resulted to us, to our country, and to the world, from the events of that day, and which we know must continue to rain influence on the destinies of mankind to the end of time; the elevation with which it raises us high above the ordinary feelings of life, surpass all that the study of the closet, or even the inspiration of genius, can produce. To-day it speaks to us. Its future auditories will be the successive generations of men, as they rise up before it and gather around it. Its speech will be of patriotism and courage; of civil and religious liberty; of free government; of the moral improvement and elevation of mankind; and of the immortal memory of those who, with heroic devotion, have sacrificed their lives for their country.
--Daniel Webster on the Completion of the Bunker Hill Monument (June 17, 1843).

In Monumental Melville: The Formation of a Literary Career Edgar A. Dryden quotes extensively from the 1843 Address, including Daniel Webster's depiction of the monument as "orator" and "powerful speaker." In Dryden's view, Israel Potter gives Melville's "antithetical version of the national myth that not only destabilizes Webster's vision of the monument supporting the myth of the nation, but demystifies both public and literary monumentality." For the freshest discussion to date, check out John Hay's article in the June 2016 New England Quarterly, titled Broken Hearths: Melville's Israel Potter and the Bunker Hill Monument. Rightly estimating Dryden's reading as "persuasive," Hay nevertheless offers a welcome counterbalance to the constant and by now wearisome valorizing of irony in Melville criticism.
Posted by Scott Norsworthy at 11:17 AM