Melville at Brentano's on Christmas Eve, 1891--with Clement C. Moore and others

Even if they never met in real life, Herman Melville did get to hear Clement C. Moore recite "A Visit from St. Nicholas" on Christmas Eve, 1891--in the imagination of their living mutual acquaintance, A. Oakey Hall. In A Christmas Eve at Brentano's, published in the January 1892 issue of Book Chat, Hall describes a dream vision populated by the ghosts of famous authors. Hall's departed literati are attending a holiday party conducted by another ghost, that of famed bookseller August Brentano.

"... every Christmas Eve I hold a symposium of dead and gone authors and authoresses and a merry making here from the mysterious recesses where dwell what you mortals call 'the Majority.'"

Nathaniel Parker Willis meets up with Disraeli and Bulwer. Thomas Hood and Edgar Allan Poe compare new editions. Likewise Elizabeth Barrett Browning and Felicia Hemans are found "examining choicely bound volumes of their poems." Shakespeare and Bacon laugh "heartily" together over The Great Cryptogram by Ignatius Donnelly. The late Herman Melville (who had died September 28, 1891) joins British authors Owen Meredith and Lawrence Oliphant, "all recent recruits to 'the Majority'" and now "pleasantly occupied" at the festive gathering. August Brentano personally requests the recital by Clement C. Moore, who gets introduced by Santa Claus himself:

But before I had time to stow further guests of the banqueting literate in my perplexed memory there was a bustle at the head of the table, and for the first time on this occasion of the fairy like feast I heard a voice—that of Santa Claus—saying: "by request of our great book-selling Host, Clement C. Moore will now recite his celebrated ode beginning—'Twas the night before Christmas when,' etc."

This the old Knickerbocker bard gave ore rotundo with spirited emphasis from his seat next to General Geo. P. Morris: while Santa Claus, with eloquent eyebrows, picturesque shaking beard, and suggestive gestures gave strange effect to the timely lines.
--A. Oakey Hall, "A Christmas Eve at Brentano's" in Book Chat, Volume 7. 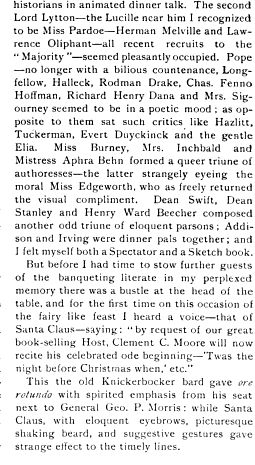 Earlier in 1891, A. Oakey Hall had separately mentioned both Moore and Melville (living yet) in published reminiscences of Poe and "Literati of New York Forty Years Ago." In the retrospective that appeared in the New York Weekly Press on February 25, 1891 under the main heading "Poe as Man and Poet," Hall's inventory of writers whom he had met before the Civil War included


Herman Melville, whom Stevenson has seemed to take as his model; the Duyckinck brothers, the daintiest critics of their day; Cornelius Mathews, the American Dickens, whom Lowell so excoriated in his "Fable for the Critics"…
--New York Weekly Press, February 25, 1891

Posted by Scott Norsworthy at 11:40 AM