Back in 1847, William Alfred Jones perceived the "classical" element as the strongest and most essential feature of Clement C. Moore's poetry, appealingly complicated by "a mingled happy vein of delicate humor and pathetic sentiment."

Ruth K. MacDonald got to the heart of Moore's high classical style in her 1983 article, Santa Claus in America: The Influence of "The Night Before Christmas" which I unfortunately overlooked in the recent post here on Moore's facility with Homeric similes. Professor MacDonald provides the basic foundation for understanding Moore's poem as a literary effort, with specific and apparently still much-needed attention to its literary form, style, and antecedents:


... But Moore wrote in rhymed, closed couplets, as eighteenth-century poets had, and used many devices from classical poetry, such as epic simile—"As dry leaves before the wild hurricane fly, / When they meet with an obstacle, mount to the sky, / So, up to the housetop his coursers they flew. . ."—metonymy—"Mamma in her 'kerchief, and I in my cap, / Had just settled our brains for a long winter's nap. . ."—and high diction, such as "More rapid than eagles his coursers they came." The description of St. Nick's physical appearance—"His eyes—how they twinkled!. . ."—reads like a catalog of the virtues of some Greek hero from the Iliad or the Odyssey.

Moore also incorporated many ideas from other writers into his poem. He may have borrowed the idea of reindeer from The Children's Friend: A New-Year's Present, to Little Ones from Five to Twelve which was published in New York in 1821, the first work to mention reindeer in connection with St. Nick. The names for the reindeer, first given in Moore's poem, may have been derived from this alliterative catalog of fairies in Michael Drayton's Nymphidia....  --Ruth K. MacDonald via Project MUSE 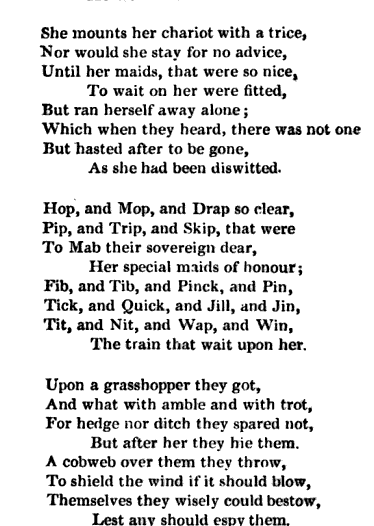 Hop and Mop and Drop so clear,
Pip and Trip and Skip that were
To Mab, their sovereign, ever dear,
Her special maids of honour ;
Fib and Tib and Pink and Pin,
Tick and Quick and Jill and Jin,
Tit and Nit and Wap and Win,
The train that wait upon her.   --Michael Drayton. Nymphidia, The Court of Fairy
Posted by Scott Norsworthy at 8:10 AM