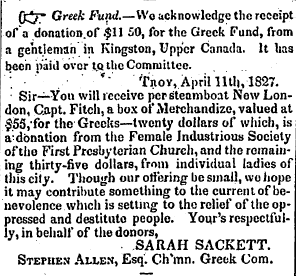 Sir--You will receive per steamboat New London, Capt. Fitch, Merchandize, valued at $55, for the Greeks--twenty dollars of which, is a donation from the Female Industrious Society of the First Presbyterian Church, and the remaining thirty-five dollars, from individual ladies of this city. Though our offering be small, we hope it may contribute something to the current of benevolence which is setting to the relief of the oppressed and destitute people. Your's respectfully, in behalf of the donors.

This Sarah Sackett of Troy is the former Sarah H. Pardee, wife of Daniel Sackett, a crockery and glassware merchant in Troy, New York. Norman Tuttle, publisher of the Troy Sentinel, identified Sarah Sackett as the person who had given a copy of Clement C. Moore's poem "A Visit from St. Nicholas" to editor Orville L. Holley, back in December 1823. Other accounts involve Harriet Butler, daughter of Episcopal clergyman David Butler. As related for example in Troy's One Hundred Years, Harriet supposedly copied out the poem while visiting the Moore family and brought it back to Troy. Any sequence of transmission involving the Butlers, Sacketts, and Holley seems plausible. The families of Clement C. Moore and the Rev. David Butler were connected through longstanding ties of friendship and religion. Rev. Butler was then rector of St. Paul's Episcopal Church in Troy (consecrated in 1806 by Moore's father, the Bishop). Butler in turn was socially and politically connected with Daniel Sackett and Orville Holley as leading citizens of Troy, and prominent Whigs. All three were founding members of the Troy Colonization Society.

Sarah Sackett's published letter to the Greek Committee in 1827 reveals another connection to Clement C. Moore in their mutual support for the cause of Greek independence. Sarah Sackett organized for the charitable relief of "oppressed and destitute" Greeks. Moore, too, actively supported the Greek Fund. In verse, Moore honored the Greek spirit of rebellion in "To the Nymphs of Mount Harmony," allegorizing the plight of defeated Greeks as the overthrow and enforced captivity of an Arcadian sprite or fairy. Sarah Sackett and Clement C. Moore were both philhellenists, like Edward Everett, Daniel Webster, and Henry Clay. And Byron:


Henceforth there could be little question of the strength of Philhellenism in the United States; in America as elsewhere Byron’s dramatic self-sacrifice rendered the cause of Greek independence services which never can be repaid. The autumn and winter of 1823-1824 were a period in which sentiment for Greek independence reached a high point, strenuous efforts were put forth to render active assistance to the revolutionary forces, and serious consideration was given to a possible recognition of Greek belligerency and independence by the government of the United States.
--Edward Mead Earle, American Interest in the Greek Cause, 1821-1827

Coincidentally, contributions to the Greek Fund were being passionately solicited and publicized during the same holiday season of 1823-4 in which Clement C. Moore's "A Visit from St. Nicholas" made is first appearance in the Troy Sentinel. December 1823 marked the start of the Greek Fund as well as "The Night Before Christmas" tradition. The first meeting of Troy citizens on behalf of the oppressed Greeks generated $710 for the Greek Fund, as reported in a published letter from Esaias Warren:

Dear Sir--In compliance with a resolution, passed at a meeting of the citizens of this place, I have the pleasure of transmitting you, the annexed draft for $710, the amount contributed by them towards aiding the Greeks in their struggle against Turkish oppression.

I am, sir, respectfully.
Your obedient servant,
ESAIAS WARREN.

Esaias Warren was then mayor of Troy, president of the Troy Bank, and a warden of the Butlers' church, St. Paul's Episcopal. Warren's mother Phebe and father Eliakim had been instrumental in establishing St. Paul's in Troy. Indeed, at first the Warrens and Lemuel Hawley were the church. Esaias Warren became "senior warden" after his father's death in 1824, according to Hudson-Mohawk Genealogical and Family Memoirs.

In New York City on Tuesday, December 2, 1823 Moore's old friend John Duer addressed a large and distinguished gathering at the Tontine Coffee House. Speaking after John Pintard and S. R. Hurd, Duer emphasized "the degraded condition of the Greeks" in "contrast with their ancient splendor and renown." Duer

Meeting on Tuesday night, December 30, 1823 at Creigier's Tavern with his 9th ward neighbors, Clement C. Moore endorsed the resolution of support and volunteered for the fundraising committee.

Resolved, That we cordially approve of the exertions making by our fellow citizens in this city, and in various parts of the Union to raise by subscription, a sum of money to aid the Greeks in their struggle, with their barbarous and inhuman oppressors, for religious and civil freedom.

Resolved, That the following be the committee to district the ward and wait on the inhabitants in aid of the Greek Fund....


"In imitation of Byron, poets and literary men like William Cullen Bryant and Fitz-Greene Halleck wielded their pens in stout defense of the Greeks, in whom they saw heroic descendants of classic forefathers." --Edward Mead Earle, American Interest in the Greek Cause, 1821-1827

In 1826, Herman Melville's older brother Gansevoort recited Halleck's pro-Greek "Marco Bozzaris" at the New York High School. Around 1827 or 1828 (my best guess for now), Clement C. Moore composed "To the Nymphs of Mount Harmony." Moore's allegory of Ottoman tyranny and Greek suffering unfolds as the tale of a captive elf, whispered in the "wond'ring ear" of an Arcadian shepherd. Though drenched in the conventions and mythology of pastoral poetry, Moore's manner of describing the shepherd's "wond'ring ear" nicely harmonizes with the speaker's famously "wondering eyes" in "The Night Before Christmas." Transcribed below from the only known printing in Moore's 1844 Poems.

TO THE NYMPHS OF MOUNT HARMONY.

An idle swain late chanc'd to roam
Beneath a grove's leaf-lattic'd dome,
That near a verdant mount was plac'd
Whose brow no title e'er had grac'd
Till nymphs declared the mount should claim
Sweet Harmony's inspiring name.
Here, as the swain at even strayed,
Wooed by the grove's sequester'd shade,
With thoughts unfix'd, and vacant eye,
And idly sad, he scarce knew why;
A mournful spirit of the wood,
Touch'd haply, by his kindred mood,
Soft-sighing from a hawthorn near,
Thus whisper'd in his wond'ring ear.

"A sprite I was, in happier times,
Disporting in the favor'd climes
Of early Greece; when freedom's ray
Bade mirth through all her regions play;
When wood-nymphs with their huntress-queen,
The muses and the loves were seen
To sport, like fauns, beside each rill,
And deck, like flow'rets, every hill,
'Twas then I serv'd the lighter joys
Of rural nymphs and sylvan boys;
And, sportive as the summer airs,
Exulted in my frolic cares.

" Oft, to a playful zephyr chang'd.
Along the reedy banks I rang'd;
Or, sighing o'er the oaten field,
I tried the note each stalk would yield,
In quest of dulcet tones to suit
Some favor'd fawn's or shepherd's flute.

"Oft, in a fleecy vapor's guise,
The zephyrs bore me to the skies:
Where, 'midst the clouds with thunder fraught,
The rainbow's brightest tints I caught;
Then, melting into finest dews,
Distributed the lovely hues
To opening buds, or full-blown flowers,
Round naiad's couch, or wood-nymph's bowers.

"Oft, in a virgin lily's bell,
I caught the purest dews that fell,
With chaste suffusion to supply
Some weeping Muse's languid eye.
For, tears that from the Muses flow.
Unlike the drops of vulgar wo,
Emit the dew's inconstant gleam,
And soon are chas'd by pleasure's beam —

"Dear airy partners in delight!
Who skimm'd, like mists, the mountain's height,
Or danc'd along the limpid stream
Illum'd by freedom's golden beam!
Ye perish'd in the floods and gales
That ruin'd all our smiling vales,
And chill'd and wither'd every bloom
In tyranny's detested gloom!

"A fiend that in the tempest flew
On wing still wet with stygian dew
Rapt me in a hurling blast
Athwart the ocean's dreary vast;
And set me, with infernal spell,
In this sequester'd grove to dwell.
Here, in my lonely prison bound,
Beset with dire enchantments round,
I've seen whole ages ling'ring go.
With scarce a solace for my wo;
Till late, beneath the neighb'ring shades,
Methought a band of Tempe's maids,
With all their wonted mirth elate,
Came, destin'd by relenting fate,
Their long, long rovings here to cease,
And charm my anguish into peace.
For, as they gambol'd o'er the green,
Once more I saw Arcadia's scene;
Again I heard each well-lov'd voice
That bade the Aonian hills rejoice.
But soon the lovely vision pass'd.
Through lonely shades now sweeps the blast,
Where, late, the fairy-footed throng
Prolong'd the dance, or pour'd the song.
If e'er thy bosom, gentle swain,
Was touch'd with sympathetic pain.
Hie thee to where the nymphs now dwell,
And all my sorrows kindly tell.
And say, if e'er this lone retreat
Their lovely band again shall greet,
I'll wake my long-neglected powers;
Refine the dews, new-tint the flowers.
I'll fringe the trees with speckled moss.
And give their leaves a finer gloss.
The painted fly shall learn to fling
Sweet odors from his gaudy wing.
I'll winnow, with my silken sails,
Each noxious breath that taints the gales;
With sweeter strains the birds inspire,
And lead, myself, the tuneful choir.  --Clement C. Moore


Lines written after a snow-storm, 1824 and 1844 versions
https://melvilliana.blogspot.com/2019/04/lines-written-after-snow-storm-by.html

Posted by Scott Norsworthy at 4:23 PM