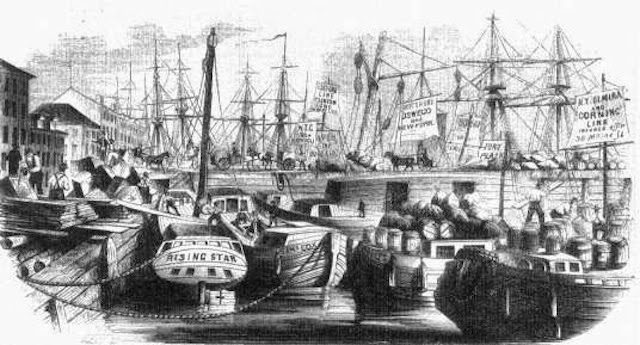 THE WORKING-MEN AWAKE.—An immense mass meeting was held last evening at James’ slip. There could not have been less than three thousand sailors, mechanics and working-men. The meeting was addressed, with great effect, by J. E. Palmer, Esq., Gansevoort Melville, Esq., Maj. Davezac, and others; and adjourned at a late hour, in the best possible spirit.

Found online in the Newspaper Archives at Genealogy Bank

James' Slip is where Gansevoort appeared the following year to deliver another early political speech.

His earliest political speech, his debut at Tammany Hall (or something close to it) happened in April 1842. As reported in the New York Weekly Herald, April 30, 1842, Gansevoort weighed in on the Dorr Rebellion in Rhode Island, arguing against the "Charterites" for elimination of the property qualification and extension of voting rights:


He also denounced the Algerine Act, and called it an act for the propagation of constructive treason generally. The people have rightfully elected officers under their constitution. The others chose to live under Charles’s charter, who though dead 200 years, has still some very dutiful subjects now living in Rhode Island. And who was Charles 2d? A pitiful, profligate abandoned fellow, who, if he was living now in New York, couldn’t be elected Constable even for the 6th Ward; and his appropriate sphere, would be behind the counter of a perfumer’s store dealing out essences to the moustached fools and loungers of Broadway—(Cheers.)—or else he’d be in a brothel with panderers, procurers, and pimps. (Tremendous cheers) The great point contended for by the people of Rhode Island was a universal free suffrage. This had been tried in 22 States out of 26, and works well. Their opponents insist on a property qualification. And what is wealth? The sweat of the poor and the blood of the brave. (Cheers.) This is the old Federal plan to detract the capacity of the people for self government. But the tide of public opinion is sweeping on. Can they stand up against it? Let them try it if they dare. When they shall have rolled back the Amazon, and damned it up with bulrushes, and shaken the Andes to their base, then they may do it, but not before. (Cheers.

Posted by Scott Norsworthy at 7:51 PM