So Yankee Doodle is digitized! Much of it anyhow, although some numbers may be missing in this collection. We can look more into that later on...

I do remember once visiting a library somewhere to inspect Yankee Doodle--on microfilm, probably. Yankee Doodle you know has Melville's comic Authentic Anecdotes of Old Zack and probably some other bits he contributed in the summer of 1847, before getting married to Elizabeth Shaw.

This particular volume hails from the University of Chicago library. Look in the back! Sticking out of the pocket, there's an old library card with a few signatures, or names anyhow, presumably of students and faculty. 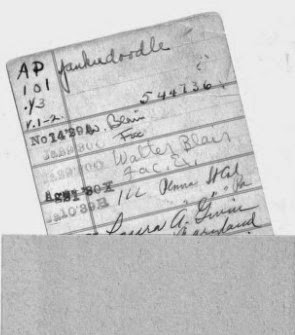 The first listed borrower is W. Blair, a faculty member. Wow, Walter Blair. Due (or checked out? yikes, I can't even remember how the ancient system used to work) November 14, 1929. Then renewed until the end of August 1930, by or for Walter Blair. So he was teaching by then at the University of Chicago, while working toward the PhD he earned in 1931.
The legendary Walter Blair!


“Unsophisticated and frivolous, I elected to write a dissertation on a subject even less respected than American literature—our humor.”

--quoted by Hamlin Hill in Walter Blair Through the Ages.

Posted by Scott Norsworthy at 7:40 PM