speaking a whaler, homeward bound with a full cargo in Ruschenberger's 1848 journal and Moby-Dick

Remember the enviable Bachelor? Loaded with oil and homeward bound, The Bachelor is the happy whaler the depressed Pequod meets and "speaks" in chapter 115 of Moby-Dick:


And jolly enough were the sights and the sounds that came bearing down before the wind, some few weeks after Ahab's harpoon had been welded.

It was a Nantucket ship, the Bachelor, which had just wedged in her last cask of oil, and bolted down her bursting hatches; and now, in glad holiday apparel, was joyously, though somewhat vain-gloriously, sailing round among the widely-separated ships on the ground, previous to pointing her prow for home.

The three men at her mast-head wore long streamers of narrow red bunting at their hats; from the stern, a whale-boat was suspended, bottom down; and hanging captive from the bowsprit was seen the long lower jaw of the last whale they had slain. Signals, ensigns, and jacks of all colors were flying from her rigging, on every side. Sideways lashed in each of her three basketed tops were two barrels of sperm; above which, in her top-mast cross-trees, you saw slender breakers of the same precious fluid; and nailed to her main truck was a brazen lamp.

Slightly revised, Ruschenberger's report of meeting the triumphant Aeronaut was printed in the June 1852 installment of "Notes and Commentaries on a Voyage to China," Southern Literary Messenger 16 (June 1852): 327. Transcribed below, the encounter with the Aeronaut as Ruschenberger originally described it in his manuscript journal entry for April 29, 1848:

A great event has happened to day in our cruise; nothing less than the first despatches from the ship since losing sight of the United States having been this day put on board the whaling barque "Æronaut" or "Argonaut," bound direct to New London, Ct. Our [?illegible word] were closed before twelve o'clock, and therefore, the latitude and longitude were guessed at. My Mary had directed to her a packet of three ounces, the postage on which will be some 68 cents; it will afford her [? illegible word or figure] months of reading, for it contains eleven sheets of diary, besides four or five desultory sheets on private matters.

When will the Aeronaut, [marginal note with carat: "Mystic"] reach New London? She has been now five months without seeing the land, has been absent thirty months, and has a full cargo of oil. She should be at her port at the end of 45 days, and you should get my packet about the 15th of June. And by the 1st of July, you will probably receive this also.

It was pleasant to see the excitement produced by the speaking this whaler, all sea-worn as she seemed; her sails thin and white; her bunting streaming bright, and the hull well sunk in the sea, indicating that she was full. A whale's jaw bones decorated the stern, and her whale-boats rested bottom upwards, between the masts, and at her main mast-head she wore a large black ball, one foot in diameter, fixed on a staff, which, it was said by [old? Fisher?], was a signal of triumph to other whalers that her cargo was complete.

When her commander answered to our hail, "bound to New London", and signified that she would receive a letter-bag on board, every body rushed to seal up their packets. And we all followed the boat with our eyes as she bore the little letter-bag (a very short distance to be sure) on its way to our home. I wished myself in the shape of a letter. I cannot tell how it was, that I at first doubted whether I would send my numerous sheets, & therefore, at the last moment, wrote two words in a sheet and directed it to you. Then, Gedney told Lt. Hunter who was sent in the boat, if the vessel was not bound directly home, to bring back the bag; I sent forward all at the last instant. How pleased you will be, I am sure, when the packet first reaches your hand, if it arrive as I hope before any thing sent forward from Rio.

I wished myself in the shape of a letter. As Ruschenberger tells it, the Plymouth crew intently and emotionally watched the boat transporting their letters to the homeward bound whaler. A poignant moment, the feeling of which Melville replicates in Moby-Dick at the close of chapter 115, "The Pequod Meets the Bachelor":


and so the two vessels parted; the crew of the Pequod looking with grave, lingering glances towards the receding Bachelor...

The business of the letter-bag in Ruschenberger's 1848 manuscript journal is hugely important for an understanding of how Herman Melville might possibly have got hold of said manuscript, or chunks of it, early enough to make use of during the writing of White-Jacket (1850). On apparent borrowings from Ruschenberger's 1848 journal in Melville's White-Jacket, check out earlier Melvilliana posts on the belaying pin incident and the flogging of John and Peter. 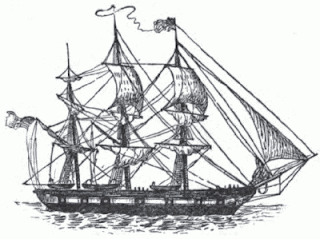 Ruschenberger's service aboard the USS Plymouth ended sometime in 1849; exactly when I am not sure yet, but certainly he was back home in Philadelphia by May 24, 1849. That's before Melville started writing White-Jacket, but then again, we need to allow for the time it takes to hand-write and distribute a fair copy.

But here's the great thing about Ruschenberger's journal entry, transcribed above. Ruschenberger as we learn "mailed" his first packet home on April 29, 1848 via the whaler Aeronaut. That first shipment contained eleven diary pages and more, including Ruschenberger's dramatic narratives about the belaying pin incident and flogging of John and Peter. Ruschnberger hopefully calculated this first installment would reach his wife Mary by June 15, 1848. He planned to send more pages from Rio in a few weeks, and, again hopefully, anticipated his wife's receipt of those (including the story of the encounter with the Aeronaut) in July 1848.

Thus,  even allowing for delays, Mary Ruschenberger would have received early parts of her husband's journal, and could have begun making legible copies as instructed, by September or October 1848. Without question, Melville wrote White-Jacket fast, "within two months, July and August 1849."  Voila! Plenty of time for Melville to have procured a copy in the early months of 1849, even before May 1849 or so when he started writing Redburn.

This feat of copying to which the manuscript journal itself physically testifies (count the instances of the word "copied" in the top margins) strikes me as remarkable if not miraculous, and existentially ironic.

Think of it! Mary B. Wister Ruschenberger, in the last months of 1848 or early in 1849, copying, or having others copy her husband Willie's manuscript journal, written at sea--already working away while Willie was sailing home. 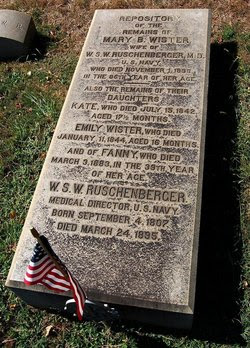 Posted by Scott Norsworthy at 3:16 PM