another Repeal speech by Gansevoort Melville

UPDATE 2/22/2015: This newspaper transcript of Gansevoort's Repeal speech was also reprinted from the New York Freeman's Journal and Truth-Teller under the heading AMERICA--REPEAL in the Belfast, Ireland Vindicator, Wednesday, July 5, 1843.

We regret that space will not permit us to give the speeches at any length, but we cannot deny our readers the pleasure of perusing the following sentences from the address of Mr. Gansevoort Melville, a gentleman evidently of Dutch extraction:—

What, then, will Sir Robert Peel do? He has but one other resource and that is force; and this he dare not try. As honest Tom Steele said on the Dublin Corn Exchange, “Sir Robert Peel talks of civil war, let him try it if he dare.” (Terrific cheering, waving of hats, handkerchiefs, &c.) If force be used, it will add but another and an apt illustration of the old adage;

Force? force! physical force! to put down a peaceful, sublime, moral movement like this on the part of an arisen, awakened, and united people for the recovery of their inherent and inalienable rights. The very heavens would cry out shame upon such conduct. But if England wills it, on her be the guilt. Let but one drop of a Repealer’s blood be shed by a British bayonet, and the accumulated and reiterated wrong of seven hundred years will bring upon their authors a fitting, a self-induced, and a righteous retribution. The volcano would burst, and the Saxon be swept from the face of the land. The Repealers will rally under the standard of the green:

“For the green—oh! the green, is the colour of the true,

If the Irish do so rally, it will be because England unsheathes her weapon to strike, the sword of Ireland must be drawn to defend (cheers). Our ancestors here in America did not wait to be smitten. They saw the blow impending, and in the language of a great orator, “Our forefathers went to war against a preamble. They draw their swords against the recital of an act of parliament.” The sword of Ireland has slumbered long and peacefully. It has not seen the light since Limerick and Fontenoy; but it has not rested. It is as keen, as bright, and as true as ever, and if Ireland be compelled in self-defence to draw it, she’ll throw away the scabbard, and the blade will leap into the free light and air of God, to blaze meteor-like in the van of a people’s death-struggle for freedom, never to be laid aside till “Ireland be a nation.”

(“Here,” in the language of a daily paper, “the enthusiasm beggared description; the whole audience rose to their feet, and the cheering for several minutes was perfectly astounding.”) 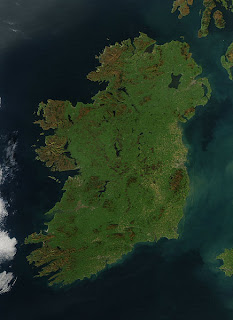 Posted by Scott Norsworthy at 1:23 AM