snugged in the arms of Thorvaldsen's Night

Rest therefore, free from all despite,
Snugged in the arms of comfortable night.

These concluding lines of Herman Melville's poem Immolated picture the poetic effusions of youth as metaphorical children, somehow sacrificed yet safe and secure in the embrace of maternal night. Melville's vivid image is borrowed from the popular allegorical depiction of Night as a winged female figure, in flight with her twin children Sleep and Death. ﻿﻿﻿﻿﻿﻿
In Melville's time this image of Night was everywhere, reproduced frequently in sculpture, paintings, prints, plates, coins, and jewelry. Nearly all popular versions of the image derive from the 1815 marble relief Night, with Her Children Sleep and Death by Danish-Icelandic artist Bertel Thorvaldsen (1770-1844).

Yes in those days Thorvaldsen's Night was all over the place, even Nathaniel Hawthorne's bed. Sketched there on the headboard by his wife Sophia, according to Julia Ward Howe: 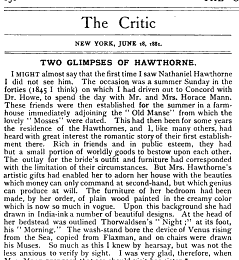 I might almost say that the first time I saw Nathaniel Hawthorne I did not see him. The occasion was a summer Sunday in the forties (1845 I think) on which I had driven out to Concord with Dr. Howe, to spend the day with Mr. and Mrs. Horace Mann. These friends were then established for the summer in a farmhouse immediately adjoining the "Old Manse" from which the lovely "Mosses" were dated. This had then been for some years the residence of the Hawthomes, and I, like many others, had heard with great interest the romantic story of their first establishment there. Rich in friends and in public esteem, they had but a small portion of worldly goods to bestow upon each other. The outlay for the bride's outfit and furniture had corresponded with the limitation of their circumstances. But Mrs. Hawthorne's artistic gifts had enabled her to adorn her house with the beauties which money can only command at second-hand, but which genius can produce at will. The furniture of her bedroom had been made, by her order, of plain wood painted in the creamy color which is now so much in vogue. Upon this background she had drawn in India-ink a number of beautiful designs. At the head of her bedstead was outlined Thorwaldsen's " Night;" at its foot, his " Morning." The wash-stand bore the device of Venus rising from the Sea, copied from Flaxman, and on chairs were drawn his Muses. So much as this I knew by hearsay, but was not the less anxious to verify by sight. I was very glad, therefore, when Mrs. Mann proposed that we should visit her sister.* --The Critic 1.12 - June 18, 1881

Posted by Scott Norsworthy at 12:20 PM