"The history of the British Government can be written under three heads: Fraud, Crime, and the Strong-hand.... Her government is the most cunningly devised machinery that was ever forged to keep the masses in subjection, and perpetrate a race of hewers of wood and drawers of water."  --Gansevoort Melville 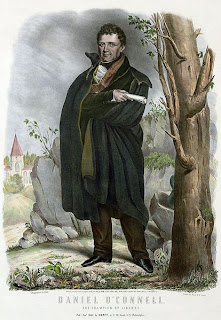 An immense meeting of the friends of Ireland was held in New-York, upon the receipt of the intelligence that the British Government had suppressed the Clontarf Meeting, and arrested O’Connell. The N. Y. Freeman’s Journal contains a glowing account of the meeting, showing that the deepest and most earnest spirit pervaded the assembly. The speeches on the occasion were truly eloquent. We copy from the Journal the report of Mr. Melville’s speech.

GANSEVOORT MELVILLE, Esq. rose to second the resolutions, and spoke nearly as follows:


Irishmen and Friends of Ireland!—Let us approach the momentous question which has called us together in all calmness, all candor, and all resolution. The eyes of our enemies are upon us, and let no indiscretion on our part give them cause to rejoice. We all know that Mr. O’Connell has been arrested and held to bail—but in what sum?—the paltry sum of £ 1000. Years ago, in other trying times, when he was before arrested, he was held to bail without any previous palaver in £ 30,000!— The circumstances of the case doubtless require the Government to insist on an increased rather than a diminished amount of bail. [NY Tribune adds: Does not this striking disparity in the amount of bail demanded, and alteration in the manner of conducting the present proceeding, look like a sham fight on the part of the British Ministry?] Does it not seem as if, afraid of the recoil of their own blunderbuss, they had taken care to put in a light load? And for what is he arrested? For a conspiracy and misdemeanors. A conspiracy to do what? A conspiracy to ameliorate the condition of the people of Ireland—to elevate them socially, politically, and morally—to make them feel more directly their responsibilities as human beings. These honest efforts in the view of the British Government are misdemeanors. They constitute a conspiracy. If this be a conspiracy, I hope that the world will soon be full of such conspiracies. If a combination of the powers of good against those of evil—of the powers of heaven against those of hell, be a conspiracy—this is one—not else. The patriot-hero may become the patriot martyr—but he is DANIEL O’CONNELL still. He is the impersonation of the popular feeling of his country—he is the foremost man of his time—the leader of the great moral movement of the age.

I am about to make a call upon you, and those who are unfriendly need not respond to it. Let no man join in what I will now propose unless his heart goes with his voice, and his whole soul is in it. I call for three times three for the champion of the people—Daniel O’Connell! [The outburst here was literally startling. Those who were sitting sprung to their feet, and those who had been standing, seemed to bound from the floor in their excitement. Hats, canes, and hands waved in the air. The three times three were given, and three times three again. We can safely say that in all our experience of public meetings we never saw the like. There was a vividness, a deafening volume, and a sustained vigor in that tremendous shout, the spontaneous addresses of the stout Repealers of New-York, to Daniel O’Connell, such as we never heard before; and for full ten minutes the roar of cheering and applause was maintained without intermission.] And now to mark our utter scorn of the pitiful conduct of the Government, I call for nine groans for the persecuting Tory brood [Such groans and hisses, and noises of abhorrence and contempt as were sent forth by that multitude, went a little beyond anything of the kind ever attempted, at least, on this side of the ocean.] Aye my men! That is the talk! It will be heard on the other side of the water. It will inspirit our friends, and discourage our foes. They may deprive Daniel O’Connell of his personal liberty. They may immure him in a dungeon. But, he will have more power in his prison cell, than if he was installed in Dublin Castle as Lord Lieutenant of the realm. His power is a moral power, and physical means cannot impair it. The rabble of Toryism, led on by the hedgehog Graham, the viper Stanley, and the ferocious and blood-thirsty Times, cry aloud as did the unbelieving Jews of old, “crucify him, crucify him!” But, now, as then, they know not what they do—they know not whom they would crucify. There is not power enough in the British Government to sacrifice that man.

Harry Flood said, long ago, that “England had sowed dragon’s teeth in Ireland.” Let her but fertilize the soil with the blood of martyrs and the crop will need no gathering. It will gather itself—it will be such a crop as the world never saw before. A harvest of a million fighting men. And what sort of men?—Men hardy, patriotic, temperate and brave. It may be that they have no arms; but I have somewhere read, that willing hand never lacked weapon. Remember what Sir Ralph Abercrombie said, and he spoke from a little experience, that he would rather face a legion of devils than the headlong charge of the Irish pikemen. But it may not come to this. The contest may be peaceful—and—[a pause]—it may not! If not—we know, and we do not seek to conceal the fact, that armies and navies, gold and munitions of war, are with the adversary. And of these we have little or none. We know all this—and yet, with calmness we abide the issue. We fear her not, were she ten times as powerful. We fear her not, so long as there is such a thing as Justice—so long as Truth has vitality—or God an existence.

The history of the British Government can be written under three heads: Fraud, Crime, and the Strong-hand. Her horizon is overcast. The world at large begins to understand her hollow professions and her mock philanthropy. Intelligence is diffusing itself among her enslaved millions. She has sowed the wind, and she will reap the whirlwind. Her government is the most cunningly devised machinery that was ever forged to keep the masses in subjection, and perpetrate a race of hewers of wood and drawers of water. And yet, stupendous as is its fabric of force and fraud, it will be upheaved from its foundations of a thousand years, and whelmed beneath a tide that knows no ebb—the tide of human progress—of equal rights and equal laws.
Turn we now to the field of Clontarf. We are all familiar with the facts. It is needless to recapitulate them. And we charge the British Government, then and there, with a preconcerted and fiendlike attempt to exasperate and surprise the Irish people into sudden rebellion. We charge upon them a calculating and cold-blooded atrocity that might call a pang to the heart of a fallen Archangel—but thank God, and under Providence [and] O’Connell, not De Gray—that failed. Although it eventuated in failure, it is an action for which Great Britain will yet be called to an account by the Great Ruler of the world. In bye-gone days, some 800 years ago—on the field of Clontarf the invading Dane was stricken to the ground by the Irish arm. Now, on the same auspicious sod—in the self-same cause of country—the sons of Ireland have been spared the necessity of striking, for the swollen and purse proud Englisher has dug the grave of his own political power with his own felon hand. The sun of Ireland’s freedom once more rose from the field of Clontarf—bloody red;--it now struggles up, virgin white; but it is the same sun of victory. In future days, when you, and I, and all of us, will be as the dust of the valley, and have gone to our long account, men will look upon Clontarf as a holy and consecrated spot—the moral Marathon of Ireland—the birth-place of a nation.

And now for ourselves—for depend upon it, Ireland, even if left alone, can take care of herself. However that may be, we must not be wanting.

[NY Tribune adds:]  ...we must not be wanting. The good cause must not suffer in our hands. We must do our duty, our whole duty, conscientiously and fearlessly, and let the consequences take care of themselves. The man who heretofore has been with us, and who now forsakes the standard of Repeal, is a traitor and a dastard. Are there any such here? Is there a man in this Association who wishes to turn back? (A deafening shout of “no! no!” from, as it seemed, every part of the hall.) If there be so base a recreant let him go; but let him go with the mark of Cain upon his brow. Then there are none such here. We are all united as one man.— And now I ask ye—will you sustain O’Connell and Repeal? Will you stand by the cause of Freedom and of Ireland?— Will you be true to yourselves, your kinsmen, your country and your God? (This was received with one overwhelming shout of stern, almost fierce determination.) (As it subsided a deep, manly voice cried out—“To the death! aye to the death.) Now, in the sight of both God and man…

[A good strong voice cried out, “To the death!”] Aye, to the death. Now, in the sight of both God and man, we have pledged ourselves to sustain this cause, and we will redeem our pledge. We will not permit it to be mixed with any other. By every lawful and honorable means, living and dying, we will uphold it. Whether its green banner streams in triumph, or draggle in defeat, by that banner will we be found. We hold in our hands that sword of Truth, before which error must shrink and tyrants tremble. The enemies of Ireland and Liberty shall yet be taught, that


“Freedom’s battle, once begun,
Bequeathed from bleeding sire to son,
Though baffled oft, is always won.”

Here Mr. Melville resumed his seat, amid the most enthusiastic and protracted applause.

Posted by Scott Norsworthy at 10:41 AM