Shown in detail above, an original drawing by the gifted and popular 19th century artist Felix Darley from the close of Darley's Fourth of July note to Evert A. Duyckinck. Darley's 1857 caricature represents a patriotic fellow-American celebrating Independence Day in the great American way, with his gun blazing, flag waving, and plenty of gin on hand.
Transcribed below, the text of Darley's letter to Duyckinck from Claymont, Delaware on July 4, 1857:

I send you by Express two more designs for the Poets of the 19th Century with a portion of the text which you sent me. I will send you the rest with the remaining drawings in a few days. One of them will be for Poe’s Raven and the other for Simms’ poem.

The glorious 4th is likely I fear to be a damp one—innumerable spit devils and other patriotic explosions of gunpowder will be nipped in the bud. I have occasionally a reminiscence of Brandywine in a distant pop from some juvenile cracker in the neighborhood which greatly assists my fancy being engaged at present on designs for Irving’s Washington.

Evert Duyckinck edited the Americanized volume of Willmot's Poets of the Nineteenth Century, expanded with "liberal space" for "American authors, illustrated by American artists," published in 1858 by Harper & Brothers. Darley's illustration for Blessings on Children by William Gilmore Simms appears there on page 416; the one for Poe's The Raven on page 466. American additions included Clement C. Moore's A Visit from St Nicholas, also illustrated by Darley. With these treasures and more, the volume made a "gorgeous and tasteful GIFT BOOK" that was already available in bookstores by December 1857. 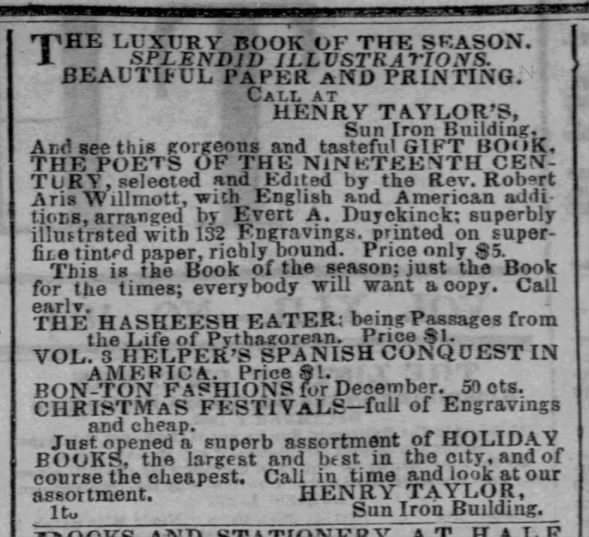 F. O. C. Darley of course had many friends among the literati including Herman Melville. In the summer of 1853 Darley visited Melville at his Arrowhead farm near Pittsfield. With "a party of gentlemen" they explored the Dome of Taconic (Jay Leyda, The Melville Log Volume 1 page 478; and Hershel Parker, Herman Melville: A Biography Volume 2, 1851-1891 pages 173-4). On another Berkshire adventure, Darley and Maunsell B. Field joined Melville for dinner with Oliver Wendell Holmes. As Field remembered it, they did not get around to eating but Field "never chanced to hear better talking" as that between Holmes and Melville on "East India religions and mythologies."

And this reminds me of a little excursion which DARLEY, the artist, and myself once made together from Stockbridge. We started in a buggy to call upon MELVILLE, intending to go from there to Dr. HOLMES's, then to the hotel at Pittsfield to dine, and thence home. We found MELVILLE, whom I had always known as the most silent man of my acquaintance, sitting on the porch in front of his door. He took us to a particular spot on his place to show us some superb trees. He told me that he spent much time there patting them upon the back. When we were about to start for Dr. HOLMES's, we invited MELVILLE to accompany us, and he accepted. We found the poet-physician, to whom I was presented for the first time, at home, and he took us into a room at the back of his house, which overlooked the mountains. For some time the talk, in which all tried to participate, dragged, and I feared that our visit would only result in boring our host, if not ourselves. At length, somehow, the conversation drifted to East India religions and mythologies, and soon there arose a discussion between HOLMES and MELVILLE, which was conducted with the most amazing skill and brilliancy on both sides. It lasted for hours, and DARLEY and I had nothing to do but to listen. I never chanced to hear better talking in my life. It was so absorbing that we took no note of time, and the Doctor lost his dinner, as we lost ours. We took tea at Pittsfield, instead of dining there, and reached home late in the evening.

In other great 4th of July news, it turns out I'm not the only one who quits singin' along every time they play a Springsteen song...

Posted by Scott Norsworthy at 6:46 AM