A NEW ROMANCE BY TYPEE MELVILLE.--
The July number of Putnam's Monthly contains the first part of an original American Romance, from the brilliant pen of Melville, called Israel Potter, a Fourth of July story.

According to the masthead the Atlas was then published by Herrick and Ropes, meaning founder Anson Herrick and John F. Ropes. Herrick and Ropes previously had owned the New York Aurora, edited for a month or so in 1842 by Walt Whitman.

As related in Melville's main source, the Life and Remarkable Adventures of Israel R. Potter, the real historical Israel Potter was born in Rhode Island. The first of many changes in Melville's rewrite is to make Berkshire, Massachusetts the birthplace of his revolutionary war hero. Melville himself was already planted there. Or transplanted, having bought an old farm house near Pittsfield and moved there from New York City with his family in late 1850. They called the place Arrowhead. 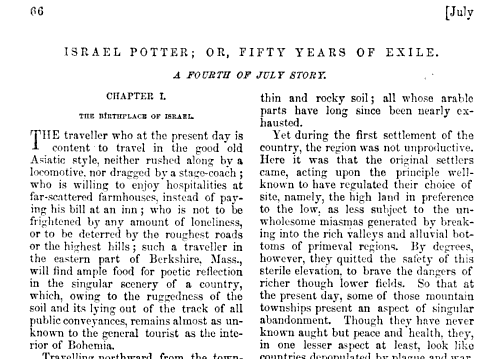 Melville's July 4th romance of Israel Potter ran in Putnam's magazine from July 1854 to March 1855, nine installments in all:

The book version Israel Potter: His Fifty Years of Exile was published in 1855 by G. P. Putnam & Co. Digitized versions of the 1855 book are accessible online courtesy of HathiTrust Digital Library

and the Internet Archive.

Posted by Scott Norsworthy at 8:01 PM