When these advance notices of Herman Melville's poem Clarel appeared in January and March 1876, the Commercial was edited and published in Cincinnati, Ohio by Murat Halstead.

HERMAN MELVILLE has written a narrative and descriptive poem on the Holy Land, which will soon be published by Putnam & Sons.  --Cincinnati Commercial, January 14, 1876.


HERMAN MELVILLE is about to appear again as an author, with a narrative poem, entitled "Clarel," relating to a pilgrimage to the Holy Land. --Cincinnati Commerical, March 16, 1876.

In September the Cincinnati Commercial excerpted the favorable review of Clarel in The Academy for August 19, 1876.


THE London Academy noticing Herman Melville's "Clarel, a Poem and Pilgrimage in the Holy Land" (G. P. Putnam & Co.), calls it "a book of very great interest, and poetry of no mean order," adding: "the form is subordinate to the matter, and a rugged inattention to niceties of rhyme and meter here and there seems rather deliberate than careless. In this, in the musical verse, where the writer chooses to be musical, in the subtle blending of old and new thought, in the unexpected turns of argument, and in the hidden connexion between things outwardly separate, Mr. Melville reminds us of A. H. Clough. He probably represents one phase of American thought as truly as Clough did one side of the Oxford of his day." Finally the Academy advises its readers to "study this interesting poem, which deserves more attention than we fear it is likely to gain in an age which craves for smooth, short-line [Academy: short, lyric] song, and is impatient for the most part of what is philosophic and didactic."  --Cincinnati Commercial, September 4, 1876.

So Murat Halstead's Commercial in Cincinnati was four days ahead of the Springfield Republican which, as Hershel Parker notes in Herman Melville: A Biography Volume 2, 1851-1891 (Johns Hopkins University Press, 2002) at pages 809-810, also quoted extensively from the review of Clarel in the London Academy.

The Springfield Republican was still owned and edited by Samuel Bowles (1826-1878). But the literary editor of the Republican was then F. B. Sanborn, as Jay Leyda points out in Another Friendly Critic for Melville, The New England Quarterly Vol. 27, No. 2 (June 1954), pages 243-249 at 247. Introducing the Academy excerpts, the Springfield Republican alluded to more negative reviews in the American press, whereas the Cincinnati Commercial had not deemed it necessary to qualify the praise in England for Melville's Clarel.

The remarkably sympathetic review of Clarel in The Academy of August 19, 1876 is transcribed in Herman Melville: The Contemporary Reviews, edited by Brian Higgins and Hershel Parker (Cambridge University Press, 1995; paperback 2009) on pages 537-8. Volume 10 of The Academy with the unsigned review of Clarel is now accessible online courtesy of Hathi Trust Digital Library:
And via Google Books:
Although The Academy regularly identified reviewers by name, the notice of Melville's Clarel in the category of "Recent Verse" was unsigned. The editor of the London Academy was Charles Edward Appleton, assisted by C. E. Doble. Presumably the philosophical and religious themes of Clarel would have intrigued Appleton, a passionate Hegelian whose "decided bent towards speculative philosophy" was already evident as an undergraduate at St John's College, Oxford (John H. Appleton and A. H. Sayce, Dr. Appleton: His Life and Literary Relics, London, 1881). Appleton visited the United States in 1875. During the London editor's American tour, the New York Herald (September 6, 1875) extolled The Academy as "one of the few English journals that speak with respect of Americans and their literature." Reprinted on September 11, 1875 in the Buffalo NY Commercial Advertiser: 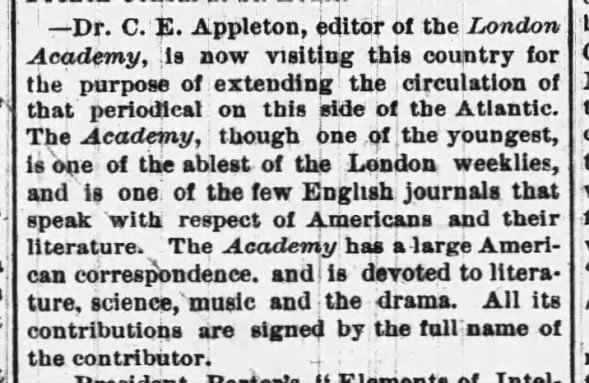 Sat, Sep 11, 1875 – 1 · The Buffalo Commercial (Buffalo, New York) · Newspapers.com
Charles Edward Appleton's 1875 mission was "to establish agencies for the publication of his journal and to enlarge its staff of American contributors" (Wilmington, DE News Journal, August 17, 1875). Evidently he managed to negotiate a deal with G. P. Putnam's Sons, Melville's publisher. A few months before the publication of Clarel, G. P. Putnam's announced they had "become the American agents for  the London Academy, an arrangement which will doubtless add largely to that well-known literary and critical journal's list of American readers" (Boston Post, February 22, 1876).

References in the Academy review to Arthur Hugh Clough and Oxford also evoke Clough's friend Matthew Arnold, whose 1866 monody Thyrsis had appeared with "Empedocles" and "Stanzas from the Grande Chartreuse" in Arnold's New Poems (Boston, 1867; this edition owned and annotated by Herman Melville, Sealts number 20 in the Catalog of Books at Melville's Marginalia Online.) In the 1870's C. E. Appleton tried to coax additional contributions to The Academy from Arnold, formerly its "star writer" according to Diderik Roll-Hansen in  Matthew Arnold and the Academy: A Note on English Criticism in the Eighteen-Seventies, PMLA Vol. 68, No. 3 (June 1953), pages 384-396. But as Roll-Hansen states, Arnold "wrote no more than three notices for Appleton's journal," the last in 1872.


The Ohio State University has both volumes of the 1876 Clarel in the Thompson Library Rare Book Stacks, but for some reason only one has been Google-digitized. At present, only volume 2 is available online, courtesy of HathiTrust Digital Library.

Posted by Scott Norsworthy at 2:58 PM