Cetology in the Encyclopaedia Britannica and Brewster's Edinburgh Encylopaedia

For the Cetology chapter in Moby-Dick; or, The Whale, Herman Melville had more accurate and up-to-date sources than old editions of Encyclopædia Britannica. Lots of Melville's literary appropriations from the writings of Beale and Bennett and Scoresby are documented in The Trying-Out of Moby-Dick by Howard P. Vincent; and in the notes to the 1952 Hendricks House Moby-Dick that Vincent edited with Luther S. Mansfield. Rounding out the Big Five of Melville's favorite whale-books were more recent firsthand narratives by J. Ross Browne and Henry T. Cheever. In addition, Melville also borrowed extensively from the WHALES entry in The Penny Cyclopædia, as Kendra H. Gaines shows in Melville Society Extracts Number 29, January 1977, pages 6-12.
https://sites.hofstra.edu/melville-society-extracts/wp-content/uploads/sites/96/2020/01/Melville-Extracts_029.pdf

The Penny Cyclopædia referenced the systematizing efforts of various distinguished naturalists without actually calling their kind of work cetology. Earlier in the 19th century, two encyclopedias that did call it "Cetology" were the Encyclopaedia Britannica and Brewster's Edinburgh Encyclopaedia. Volume 5 in successive editions (4th, 5th, 6th) of Encyclopaedia Britannica contains a long, illustrated treatise titled "Cetology" on pages 327-360. Notes in the back of the great Northwestern-Newberry Edition of Moby-Dick; or, The Whale, edited by Harrison Hayford, Hershel Parker, and G. Thomas Tanselle (Evanston and Chicago: Northwestern University Press and The Newberry Library, 1988) page 857 refer to the treatise on Cetology in the 4th edition of Encyclopædia Britannica as "the article on whales."

But the first entry for "WHALE" in Volume 20 tells you to consult the treatise on Cetology in Volume 5:

In Volume 5 of Encylopaedia Britannica 4th ed. (Edinburgh, 1810), the first of two engravings that accompany the treatise on Cetology is PLATE CXL = Plate 140, labeled "CETOLOGY."

This Cetology engraving illustrates each of the four classes of "cetaceous fishes" (as classified in the main text after Linnaeus, by number and placement of teeth) with one representative figure. Stacked vertically, the figures from top to bottom show a large whalebone or Greenland whale; narwhal or unicorn fish; large sperm whale; and grampus. 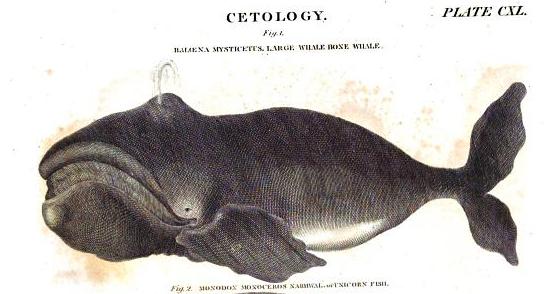 The huge "Greenland whale" (so-called, in the main text and "Explanation of Plates") or "Balaena Mysticetus" at the top of the CETOLOGY plate looks much the largest of the four kinds. Its dominating size and placement agree with the old-school cetology that Ishmael will overthrow by granting first place to the sperm whale:

The immediate textual prompt for Ishmael's mock proclamation was a bit in Thomas Beale's Natural History of the Sperm Whale that represents the Greenland Whale as royalty, metaphorically speaking: "the public voice has long enthroned him as monarch of the deep." Vincent makes the connection to Beale in The Trying-Out of Moby-Dick at page 132. Steven Olsen-Smith examines this and other borrowings in the "Introduction to Melville's Marginalia in Thomas Beale's The Natural History of the Sperm Whale," at Melville's Marginalia Online.

The CETOLOGY engraving in the Encyclopaedia Britannica visually reinforces the older idea of the Greenland Whale as "monarch of the deep." 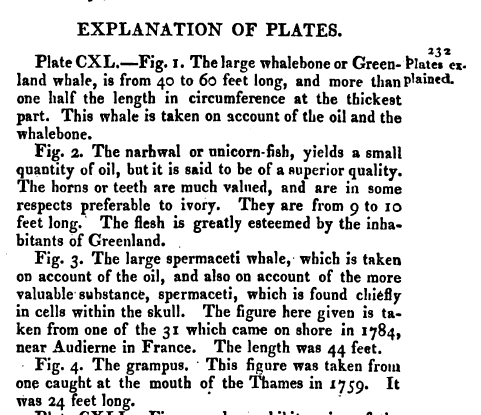 
"The doctrine or natural history of cetaceous animals."

Webster even recognizes the CETOLOGIST, "One who is versed in the natural history of the whale and its kindred animals." Still, when Melville appropriated it, the word cetology could also evoke models of scientific discourse that were already outdated. Readers looking up CETOLOGY in the Seventh Edition of Encyclopaedia Britannica, Volume 6 (Edinburgh, 1842) get redirected to Volume 14: "See MAMMALIA." There, on pages 183-191, "Great-headed whales" conclude the treatment of "Cetacea," the final section in James Wilson's new contribution on the Natural History of Quadrupeds and Whales.

Again, cetology as cetology does not appear in Melville's invaluable source-article in the Penny Cyclopaedia. Beale only employs the word once, when quoting Scoresby in one of four epigraphs at the front. Melville managed to incorporate all four in the Cetology chapter of Moby-Dick. So William Scoresby Jr. happily accepted cetology as the right name for his discipline, aiming to improve it. Indeed, in the second volume of An Account of the Arctic Regions (Edinburgh, 1820) at page 111, Scoresby helpfully footnoted the article "Cetology" in the Encyclopaedia Britannica, 4th edition.

With Scoresby Melville embraces the word cetology and for fun, adopts the style and some elements of its antiquated practice. The joke of course is how Melville's narrator arranges whales like books according to their size, turning cetology into bibliography. The largest whales are FOLIOS in Ishmael's library system of taxonomy. Sperm Whale and Greenland Whale aka "Right Whale" form Chapters 1 and 2 of the same folio-size Book. Ishmael's Chapter 2 whale embodies the popular mix-up of different species, especially the confusion of the North Atlantic right whale or Eubalaena glacialis and Bowhead whale or Balaena mysticetus--as helpfully explained on the New Bedford Whaling Museum Blog. 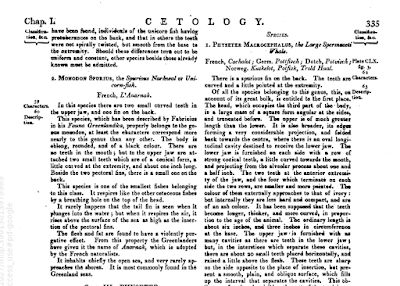 The Encyclopaedia Britannica article on "Cetology" is not listed in the searchable "Online Catalog of Books and Documents Owned, Borrowed and Consulted by Herman Melville" at Melville's Marginalia Online. Maybe he saw it somewhere, maybe not. One place Encyclopaedia Britannica would have been available to Melville was the New-York Society Library. The NYSL Supplementary Catalogue for 1841 lists the 6th edition only. The 1850 Alphabetical and Analytical Catalogue of the New York Society Library lists four different editions of Encyclopædia Britannica, including the 6th and 7th, as well as the six-volume Supplement to the 4th, 5th, and 6th editions.

Scoresby in his Account of the Arctic Regions formally cited "Cetology" from Encyclopaedia Britannica. As noted in the catalog at Melville's Marginalia Online, in 1850-1851 Melville borrowed this and another work by Scoresby, Journal of a Voyage to the Northern Whale-fishery (Sealts Numbers 450 and 451), from the New York Society Library.

If he ever looked into the Encyclopaedia Britannica article that Scoresby footnoted, Melville might have found a hint for his book-based system of classification in the way "Cetology" takes the form of discrete "Chapters":


In the following treatise, we propose to lay before our readers, 1st, The Classification and Natural History of Cetaceous Fishes; 2d, Their Anatomy and Physiology. And lastly, the History of the Whale Fishery as an object of trade. These shall be the subjects of three Chapters. -- Cetology, Encyclopædia Britannica Fourth Edition, Vol. 5, page 328. 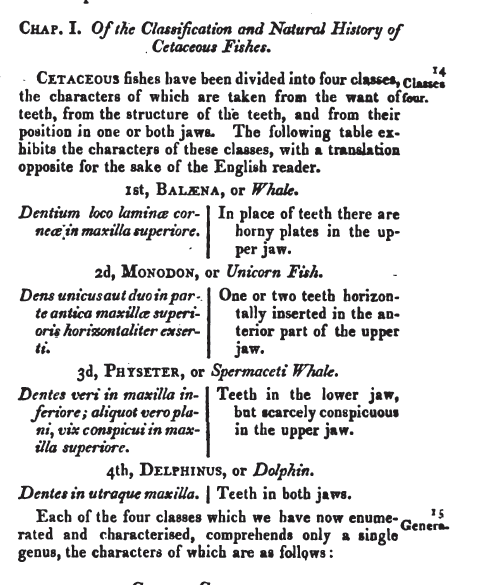 As Jeff Loveland points out, Cetology was one of seven "new treatises dealing with animals" in the fourth edition of the Encyclopaedia Britannica, along with Conchology, Erpetology, Helminthology, Ichthyology, Mammalia, and Ophiology, "evidently imitating the zoological categories of the conemporary Encyclopédie méthodique." See Loveland on Unifying Knowledge and Dividing Disciplines: The Development of Treatises in the "Encyclopaedia Britannica" in Book History Vol. 9 (2006), pages 57-87 at page 75. <https://www.jstor.org/stable/30227385>  Ichthyology and other zoological treatises in the 4th edition of Encyclopaedia Britannica also were constructed in chapters, like books.

As promoted in the Encyclopaedia Britannica, the old and wonderfully loose category of "cetaceous fishes" accords well with Ishmael's definition of the whale as


"a spouting fish with a horizontal tail."

Another nineteenth-century encyclopedia with a major article on "Cetology" was David Brewster's Edinburgh Encyclopædia, Volume 5 (Edinburgh, 1830), pages 676-694. Conspicuously, right at the start, the term "Cetaceous Animals" (not fishes) describes "the last order of the class MAMMALIA." Cetology is defined as "that department of Zoology, which treats of the structure, economy, and history of cetaceous animals, or of whales...."

The index in Volume 1 to "Authors of the Principal Articles in The Edinburgh Encyclopædia" identifies Josiah Kirby as author of the Cetology treatise there. In Volume 1 of Encyclopædia Britannica, 4th edition (Edinburgh, 1810), "Dr. Kirby, and Dr. Brewster of Edinburgh" had received credit along with general editor James Millar and Lockhart Muirhead for unspecified "articles in the various branches of Natural History." 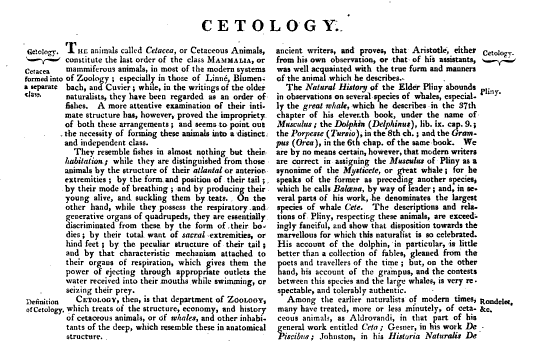 The Edinburgh Encyclopaedia, Volume 5 (Edinburgh, 1830) is Google-digitized and available online courtesy of  HathiTrust Digital Library. Illustrated with two plates of engravings, located between pages numbered 688 and 689 in the University of Michigan volume.
The Albany Young Men's Association, the library owned a set of the Edinburgh Encyclopaedia, listed in the 1837 Catalogue of Books as

When Herman Melville joined the YMA in January 1835, their set of Brewster's Edinburgh Encyclopedia was incomplete. However, Volume 5 was not among the missing numbers that were advertised as wanted by the Young Men's Association (Albany Argus, January 9, 1835).

The YMA Catalogue of Books for 1848 lists an incomplete set of the American edition, number 4061 under "Dictionaries and Encyclopedias."

A complete set in twenty-one volumes of David Brewster's New Edinburgh Encyclopaedia (Philadelphia, 1832) was available at the New York Society Library when Herman Melville belonged, according to the 1850 Alphabetical and Analytical Catalogue.

In the First American Edition (Philadelphia, 1832) of Brewster's Edinburgh Encyclopaedia, Volume 5 contains the "Cetology" article on pages 555-573:
Two plates of engravings appear in the back of the same volume:

Despite the displacement of "Cetology" in the 7th and later editions of Encyclopædia Britannica, aspiring cetologists like Ishmael in Moby-Dick still had oceans of room to investigate whales:

Let it be borne in mind by the rising race, that in relation to the cetaceous tribes, an enterprising naturalist of accurate habits, well versed in the recorded observations of his predecessors, and at the same time inclined to original investigation, has still before him a vast, and in several of its departments, an almost unexamined field.  --James Wilson on "Mammalia" in the Seventh Edition of The Encylopaedia Britannica (Edinburgh, 1842) Volume 14, page 191. Here signed "T." designating zoologist James Wilson in the alphabetical Table of Signatures. Signed "J. W." in the Eighth Edition (Edinburgh, 1857).

Further reading, A to Z:

Posted by Scott Norsworthy at 10:50 AM