Various "witness letters" assembled by Livingston descendant Mary S. Van Deusen supply valuable evidence for the history of the claim that Henry Livingston, Jr. wrote "The Night Before Christmas." For a few family members this claim became a lifelong quest. I'm pleased to contribute to the story of this fascinating family legend by locating and transcribing a letter from Cornelia Griswold Goodrich (1842-1927) to historian Benson J. Lossing. Unrecorded before now, the January 1887 letter is presented here with the kind permission of the Benson John Lossing Collection, Special Collections Research Center, Syracuse University Libraries.

Although Cornelia Griswold Goodrich  does not give the year, her letter of "Jan 1st" to Benson J. Lossing was certainly written, or rather begun (since her postscript is dated January 4th) on New Year's Day, 1887. The year 1887 can be established with certainty on internal evidence, since Goodrich refers to known details of her previous correspondence with Lossing. Specifically, the mention of "much prized contents" in the first line refers to enclosures in the December 6, 1886 letter from Lossing, including a manuscript letter from Arthur Breese to Henry Livingston, Jr.

Two letters from Lossing to Goodrich dated November 25, 1886 and December 6, 1886 are held by the Dutchess County Historical Society with other Henry Livingston Papers.
Transcriptions of both letters from Benson J. Lossing to Cornelia Griswold Goodrich are available on Mary Van Deusen's Henry Livingston website:
The January 1887 reply by Cornelia Griswold Goodrich is transcribed below from scans of the original manuscript letter, now held in the Benson John Lossing Collection, Special Collections Research Center, Syracuse University Libraries. For expert help with locating this item I am indebted to Kelly Dwyer, Reference Assistant; and Nicole Westerdahl, Reference and Access Services Librarian. Mistakes are all mine.

I trust you will forgive me for the delay in answering your very kind letter, and acknowledging its much prized contents—but my excuse is, that I have been quite unwell for some time past, & I thought I would wait to get the answers to your questions from my cousin Miss Gertrude Thomas, so as not to trouble you with too many epistles.

I am so sorry I cannot give you proof positive about the poem, of which we so long to have the true authorship established. We have only the moral certainty that it is so— & the voice of many to attest it, without one written line to prove it. The husband father of the lady who writes, Charles Livingston, possessed the original manuscript & the Po’keepsie paper in which it was published & took them with him out West, but a fire in Sandusky, where he was living, completely destroyed these valuable papers, with others. If there was any possibility of getting a paper of that time—all would be made clear. I understand Mrs Judge Gannet has some. I wrote to Platt of the Po’keepsie Eagle for information but he has not deigned a reply.

It must be about the time those other verses were written which I sent you. But I suppose Mrs. Hubbard has forgotten the exact date of the paper.

I wonder what the Moore family would have to say in regard to their claim?

You will notice in the letter from Mrs. H. that she says her Mother knew her Grandpa Henry Livingston even better than her father did. The lady whom he married was a very intimate friend, whose home in those early days was “Russ Plaas”—afterwards Mrs. Smith Thompson’s home (his sister) and now the Burial Cemetary. Communication between the families was constant—daily I presume, as the places were so near— & as Charles Livingston was from home, almost even from his early youth, she of course had knowledge of many every-day matters of interest which he missed.

Mrs. Smith Thompson daughter of Henry Livingston died last year—but I have a letter from her at home, telling very much the ' same as the ' one enclosed.— owing to illness I have not been able to go up for it. but if it is still there when I get back to Southroad will send it to you. Charles Livingston is also dead. Mrs. Gurney, I still hope to hear from & will let you know—she was is a sister of Charles Livingston. My g. g. grandfather Henry had 1. son by his first wife, & one daughter; Henry Livingston; & Catherine, the wife of Arthur Breese, Judge of the Supreme Court— by his second wife, he had 3. Sons, & 4 or 5. daughters Edwin, Charles, Sidney — &c &c.

Thank you so very much for the letter from my great grandfather Arthur Breese. It announced the death, to his father-in-law, of his son Henry Livingston, who was studying law with him in Utica.

In a letter from my cousin Miss Thomas, she says that both of the poems I sent you, were copied from the original manuscripts in her possession. She could not send them to me, as the ' book they are in ' contains private matters—

I shall be most happy some day to make you a sketch of my great. g. grandfather’s house as it stood at Locust Grove in the old days. if you want it for your book of Duchess Co. you will kindly let me know, when I shall send it?

May I ask a great favor of you Mr. Lossing? — You have been so kind in giving me such valuable hints in connection with my Uncle’s memoirs—may I solicit your kind indulgence again, regarding a sketch I have made of a delightful trip we made some 15 years ago through an unfrequented part of the Black Forest? I have a great many sketches of interiors & landscapes, & I would like to know if you think it would merit publication. — If you would let me know, if your time would allow you to do me this favor, when it would be most convenient for you to receive the Mss: I will have the sketches all ready to forward with the manuscript. but I do not quite know if I must do them in pen & ink ready for publication—or simply draw them from the original & leave it to the publisher to find his own draughtsman? I do not wish to be at any expense if I can help it, & do not know what to do in perfecting the sketches. Reversing I do not understand, but if that is not necessary I shall be happy.

If I am taking too great a liberty in asking this favor of you, please do not hesitate to refuse.

We are taking great delight in reading your charming book “Mary & Martha”, & find it most interesting. My mother intends sending ' one as a present to my Aunt Mrs. Morse, in Berlin.

Please accept our heartiest Wishes for the New-Year for yourself & Mrs. Lossing, & believe me

P. S. Jan 4th. I have left my letter open hoping each day, to receive the answer from out West. but will send it later.
C. G. G.

One of Goodrich's earlier letters to Benson J. Lossing evidently enclosed a "letter from Mrs. H." whom Cornelia Griswold Goodrich also identifies as "Mrs. Hubbard," meaning Jane Patterson Livingston Hubbard (1829-1909), daughter of Henry Livingston's son Charles and Elizabeth Clement Brewer. Lossing's Mary and Martha: the mother and the wife of George Washington was published in 1886 by Harper and Brothers. The second of two letters in the Benson J. Lossing Collection at Syracuse concerns illustrated sketches of travel in Germany that CGG apparently forwarded in manuscript, in hopes that Lossing might be able to arrange their publication. Some of this material eventually found its way into print in "Schloss Bürgeln in the Black Forest" (Woman's Cycle, July 24, 1890). Published in New York City, Woman's Cycle was founded and edited by Jane Cunningham Croly, aka Jennie June. 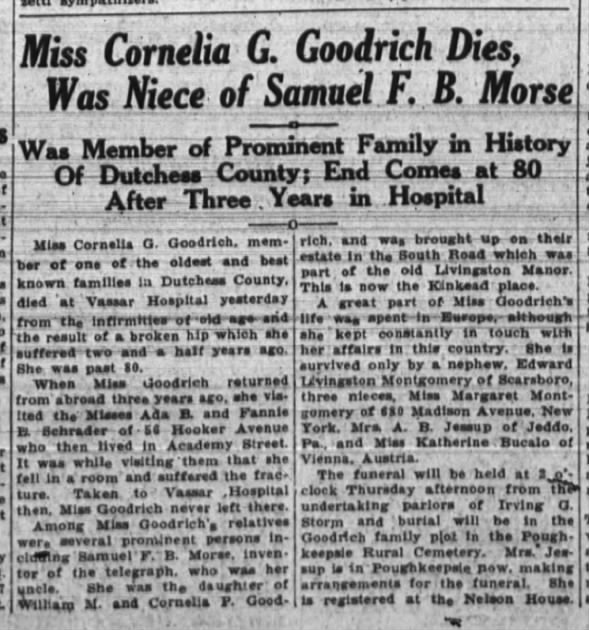 Posted by Scott Norsworthy at 10:10 AM