Finally I'm reading Christopher Freeburg's provocative and mind-expanding book Melville and the Idea of Blackness. Here's a correction to pencil-in now, and later (hopefully) incorporate in the next edition:

At p140, the quoted phrase from the article on "Annexation" in Putnam's Magazine should read "savage and intractable race," substituting the correct word "intractable" for the unfortunate error of  "untraceable":


"This picture of irredeemable African rule before European intervention shares the same historical perspective as depictions of the Indians in the Americas before the arrival of Europeans. Consequently, in another Putnam's article pushing for the United States to annex Africa, Indians are commonly referred to as a stationary, uncivilized, "savage and untraceable race." --Melville and the Idea of Blackness, p140

Here is the whole sentence, transcribed from the 1854 source:


A small, but savage and intractable race suddenly surrounded in the Providence of God by a powerful and civilized people, whose laws and customs it cannot or will not accept, but whose vices are readily spread among them, has no other destiny but to die of its corruptions, to perish in arms, or to be removed by gentle methods to some more remote and untroubled hunting grounds.  --Annexation, Putnam's Monthly Magazine (February 1854): 189

Freeburg's readers will want to know also that veteran New York journalist and editor Parke Godwin wrote the unsigned article on "Annexation," which is collected with other of his topical contributions to Putnam's and published in book form as Political Essays. By Parke Godwin. (New York: Dix, Edwards & Co., 1856).

Another quotation, oddly ascribed by Freeburg to "Putnam's on Cuban annexation," is from Godwin's essay titled "What Impression Do We, And Should We, Make Abroad?" in the October 1853 issue of Putnam's Monthly Magazine, reprinted as "Our Foreign Influence and Policy" in Godwin's collected Political Essays. Here too we find mistakes in Freeburg's transcription needing correction. The original reads:


"We must be the masters of our own destinies, and not mere ciphers in the world, like the savage tribes of our western wilderness, or the remote, feeble, degraded despised islanders of the Pacific."  --Putnam's October 1853 p349

Freeburg makes a singular "master" where Godwin wrote "masters" and leaves out one of Godwin's alliterating adjectives, "despised."

Update: Uh-oh, reading on in this prize-winning chapter I see the long quotation from the Hunilla sketch as printed at pp. 159-60 is only distantly related to the cited text from the Northwestern Newberry edition of Melville's Piazza Tales. Do I have to do all the work around here?

Still later: Wow! Most (all?) of the longer quotations from Melville's works in Freeburg's book are wretchedly transcribed. Really messed up, like this bit from Moby-Dick (The Castaway):


Wisdom, revealed his hoarded ships; and among the joyous, heartless, ever-ever juvenile eternities. . . --Christopher Freeburg, Melville and the Idea of Blackness p52

Actually I sort of like the poetical ring of "ever-ever," but I miss Melville's heaps.

While I'm at it, the phrase "primitive families in the wilderness" that Freeburg quotes at p141 is from the Putnam's article on Bancroft in the March 1853 Putnam's, p. 302. Only the second quote in Freeburg's sentence, "stationary tribes" is from the footnoted Putnam's essay on "Annexation." Freeburg's footnote properly credits "Annexation," but this and another quotation of "stationary" from "Annexation" make me think Freeburg does not understand the term "stationary" as Godwin employs it. In this particular context, "stationary" primarily means "settled." Godwin following many writers before him wants to distinguish peaceful, friendly, settled tribes from warlike, hostile, nomadic peoples.  This is important to get because Godwin regards the stationary tribes, dwellers in villages, as well on their way to being civilized, hence not backwards or frozen in unprogressive "timelessness." By contrast, Godwin would have perceived roving hunters of the plains, of the great Sioux and Comanche nations for example, as the warlike and intractable ones.

Son-in-law of William Cullen Bryant and at one time a passionate Fourierist, Godwin dedicated his volume of Political Essays to friend Charles Sumner.

Godwin once publicly vouched for HM as a real and mostly truthful person. 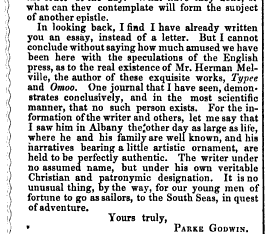 Writing from New York on July 17, 1847 Parke Godwin confirmed to the editor of The People's Journal that he had personally seen Herman Melville "in Albany the other day as large as life, where he and his family are well known, and his narratives bearing a little artistic ornament, are held to be perfectly authentic."

Posted by Scott Norsworthy at 1:44 AM