Boy of Learning, Bard of Tropes 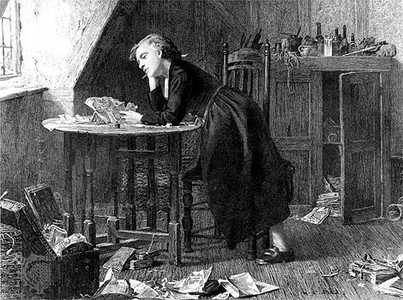 That would be Bartleby, see:

Wouldn't that be wild if Melville grabbed Bartleby's name Anagram-Style from a line in
"Chatterton's Will":


For had I never known the antique lore,
I ne'er had ventur'd from my peaceful shore,
To be the wreck of promises and hopes,
A Boy of Learning, and a Bard of Tropes  (The Poetical Works, vol 2)


What got me looking into Boy-Bard or better, Bard-Boy Chatterton was the fine inspiring article by Maryhelen C. Harmon, "Melville's 'Borrowed Personage':  Bartleby and Thomas Chatterton" over at Bartleby, the Scrivener the University of Kansas site edited by Haskell Springer.  Originally published in ESQ: A Journal of the American Renaissance 33 (First Quarter 1987): 35-44.

Yes Melville owned and marked The Poetical Works.  Ooh Harmon makes a great connection, most provocative. I'm way behind but would be glad to know of any discussion anywhere that engages or develops or even comments on Harmon's argument.  Robert Sandberg is there already, good.
Who else?
Posted by Scott Norsworthy at 10:54 PM