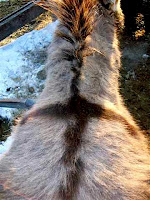 How did I miss this one?  Must add now to the bibliography in progress:


Melville was always incredibly unreliable about projected publication dates.  It is unlikely, however, that even he would have made such a commitment without having a substantial amount of material already at hand.  If material was available, it was probably the result of his hard writing the previous winter, a by-product or even an outgrowth of the Agatha story.  The most fully developed sketch of "The Encantadas" (seemingly the final outcome of the "Tortoise" book) tells of Hunilla, a Chola woman who had gone to Norfolk Isle with her husband and brother to hunt tortoises and had been isolated there after her companions were killed in a fishing accident.  Like Agatha Hatch, she displays great patience, endurance, and "resignedness."  (Melville as a Magazinist, 107-108)

Hoyle's footnote 40 cites textual examples showing Hunilla's patience, endurance, and resignedness.  Impressively, Hoyle figured Melville must have had a good portion of the proposed book done, "already at hand"--WITHOUT KNOWING of Melville's November 24, 1853 letter to the Harpers, in which Melville in fact did claim to have "now in hand, and pretty well on towards completion" the manuscript for a book of "Tortoise Hunting Adventure."  Hoyle had to infer Melville's progress from the later letter of February 14, 1854, as excerpted in Jay Leyda's Melville Log (1.484).
Posted by Scott Norsworthy at 10:44 AM

Email ThisBlogThis!Share to TwitterShare to FacebookShare to Pinterest
Labels: Agatha, Hunilla, Isle of the Cross, Norfolk Isle and the Chola Widow, Tortoise Hunting