This 1847 story concerns the same woman and same island of San Nicolas described in the 1853 newspaper account of "A Female Robinson Crusoe" that Robert Sattelmeyer and James Barbour found and excerpted in their 1978 American Literature article The Sources and Genesis of Melville's "Norfolk Isle and the Chola Widow."

Oh! how thrilling to learn as I just now did a name for her, though late bestowed in Spanish: Juana Maria. The story of this Lone Woman of San Nicolas Island also inspired Scott O'Dell's 1960 children's book Island of Blue Dolphins. Update 10/21/2018: Islapedia gives the story with helpful links to versions and research in a variety of media:

In the 1847 story the unnamed Indian woman chooses her lonely fate and does not want to be "rescued." In 1853 she was supposedly glad to leave, according to the updated newspaper report. The 1847 story is full of pathos, strong on the themes of self-exile, loneliness, horror of civilization, and silence. Much of the pathos derives from the separation of husband and wife, in consequence of the woman's fateful decision to swim back to shore rather than leave her native island. The husband-wife relationship, central to Melville's tale of Hunilla and her deep grief, is not mentioned in the 1853 account, whereas the 1847 story devotes considerable attention to the plight of the lost life-companion, even taking up the husband as "hero" of the story. The 1847 depiction of the husband's death may have informed Melville's treatment of the fatal accident that killed Hunilla's husband Felipe. Like Felipe, the female Crusoe's husband is presented as the victim of a fatal accident; and as in Melville's tale, his body washes up on the beach. The image of the pining husband's "stretched out" corpse washed up on the shore, may have influenced Melville's darkly romantic depiction of the dead Felipe as a still-faithful lover:


"his body was found on the beach a stiffened corse, stretched out, and bleaching, as it were, in the white foam of the surf which was thrown about his lifeless remains as the mighty wave broke on the shore."  (A Female Crusoe, 1847)

Felipe's body was washed ashore... But Felipe's body floated to the marge, with one arm encirclingly outstretched. Lockjawed in grim death, the lover-husband softly clasped his bride, true to her even in death's dream.
(Encantadas, Sketch Eighth, Norfolk Isle and the Chola Widow)

Melville would have recognized in the poetical language of "stiffened corse, stretched out, and bleaching" a borrowing from Winter Scenes in The Seasons by James Thomson. 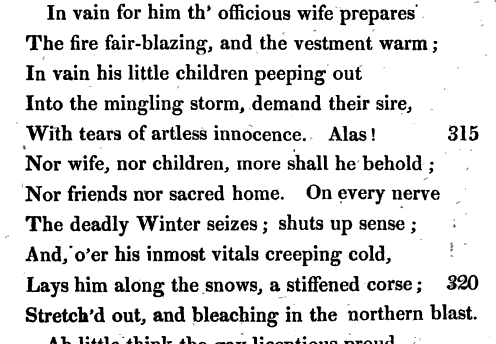 The most obvious of quoted poets in the 1847 report is of course Cowper on Selkirk.

In Melville's "Encantadas" fiction, the narrator's view of Hunilla as "heroine" subtly corrects or complements the respect reserved in the 1847 newspaper account for the husband as "hero":


"....from her mere words little would you have weened that Hunilla was herself the heroine of her tale."  (Norfolk Isle and the Chola Widow)

[Communicated for the Atlas.]

Off the coast of Alta California, about two degrees distant, bearing nearly west from Point San Pedro, which is in the latitude of 33 43 N. and longitude 118 14 W., will be found a small island, called by the Spaniards Saint Nicholas. This island was formerly inhabited by an inoffensive, indolent race of Indians, who subsisted almost entirely upon fish, which they caught from the rocks, and muscles, which they found in the sands of the beach. They were a listless, quiet race of beings, who seldom had communication with others of the human family, and who had but few wants, and fewer cares.

About the year eighteen hundred and eighteen or twenty, the Russians, from their settlements at the North, landed on this Island a party of Kodiac Indians, for the purpose of hunting the sea otter, which, at that period, abounded in those waters. This party remained on the island for more than two years: and were the means of sowing the seeds of disease and contention amongst its unsuspecting and unsophisticated inhabitants.

Some ten or twelve years after the departure of the Kodiacs, this tribe had become diminished to about twenty or thirty individuals, when the Governor of the department of California sent over a small vessel and removed them to the main.

In the last boat, which was embarking with the last of this people, (some six or eight perhaps in number) to convey them to the vessel, which was to carry them from the home of their nativity forever, was one of the tribe, small in stature, not far advanced in years, and his dusky mate, then in the bloom of life. The order had been given to shove from the shore; the oars had dipped in the wave, the boat was rising on the foaming surf, then breaking on the beach with awful roar, when, with the impulse of the moment as it were, this young and blooming bride of the red man, the imprint of whose footstep had been the last left on the sands of her island home, waved an adieu to her chosen mate, plunged into the abyss, “strove through the surge,” and, in another moment, stood alone on the shores of her native land. She turned, to give the last lingering look to her departing help-mate; and then, gathering around her form her flowing mantle, wet by the ocean wave, in an instant disappeared forever from the sight of her astonished and sorrowing companions.

The vessel weighed anchor, spread her canvass, and, in forty-eight hours, this remnant of the inhabitants of San Nicholas were landed on Point San Pedro, houseless and forlorn.

From that period to the present—if she be not dead, or has not left within the past eighteen months—has resided alone, on the Isle of San Nicholas, this female Crusoe, the monarch of all she surveys. She preferred to part even with her chosen mate, and sever every human tie that could be binding, rather than leave the home of her birth—that lonely little Isle, that had been to her a world, which she cared not to exchange for the abode of civilized man, with all its promised luxuries.

Since our Crusoe became sole monarch of the Isle, San Nicholas has been visited perhaps ten or twelve different times, by different individuals; but there she has continued to be found, with none to dispute her right—alone, solitary and forsaken.

Her dress, or covering, is composed of the skins of small birds, which she kills with stones, and sews them together with a needle of bone and the light sinews of the hair seal, sometimes found dead amongst the rocks. Her only food is a shell fish, which the surf sometimes throws on to the beach. She never remains long in one spot; but is constantly wandering around the shores of the Island, sleeping, which she seldom does, in small caves and crevices in the rocks.

During the few last years, it has been very difficult to obtain any communication with her. At the approach of the white man she flees, as from an evil spirit; and the only way to detain her, is by running her down, as you would the wild goat of the mountain, or the young fawn of the plains.

Those who have seen her at the latest period, report that she makes only a wild noise, altogether inhuman; and, when taken and detained against her will, becomes frightened and restless; that the moment she is liberated, she darts off, and endeavors to secrete herself in the wild grass, or amongst the rocks which hang over the never ceasing surf.

Every endeavor has been made, and every inducement offered, by different individuals, to prevail upon her to leave the Island, but in vain. The only home she appears to desire, is her own little isle. Her last hope, if she has any, is, to finish her journey alone. She has no wish now, to hear again the sweet music of speech. Its sounds are no longer music to her ear—and, as for civilized man, his tameness is shocking even to her dormant senses.

To all appearance, she is strong, healthy, and content to be alone. What can reconcile her to her lot, who can conjecture?   Humanity may hope that contentment many continue to be hers, to the last hour; for she is destined to lie down and die alone, on the cold shore of her isolated home, with no one to administer to her last wants, and none to cover her cold body, when the spirit shall have left the clay.

But the story of our Crusoe’s chosen mate, the companion of her early life, has yet to be told. He saw her for the last time, as we have stated, when she stood alone on the shores of her own Isle; when the boat with himself and his companions was dashing through the wild surf, that broke in uninterrupted succession against the rocks which encircled the resting place of his fathers, and which he was then leaving forever. With the remnant of the family from San Nicholas, our hero was landed at San Pedro, and there left, with the others who had accompanied him, to find a home in that land of strangers.

San Pedro, it may be known, is a bleak, barren, bluff point, running out into the blue waters of the Pacific, on which no verdure is to be seen, and but one solitary abode of man, rising amidst the desolation which surrounds it. The Pueblo de los Angelos is situated ten leagues distant, with one farm house between the one on the point and those of the town. The mission of San Gabriel lies yet farther on, some three or four leagues; where, at that time, might be found perhaps three or four hundred converted Indians.

But our hero, as he may be called, never left the beach on which he was first landed. Alone and friendless, there he remained; an isolated being, till life ceased to animate his frame. True it is, that several times he was induced, and once or twice forced, to venture as far as the Pueblo, and even the mission of San Gabriel; but he always, as soon as at liberty, returned and resumed his old station on the beach, or fixed himself on the rocks which hung around the Point. And there he might always be seen, a solitary outcast, as it were, and more constantly when the sun was going down, with his eyes gazing on that celestial orb as it sunk into the western horizon, a direction which he well knew pointed to the lost but never forgotten home of his nativity.

With difficulty he sustained the want of nature by fishing about the rocks, gathering muscles, and sometimes receiving a scanty pittance of corn from the house on the Point, or a few pence from a passing stranger.

He studiously avoided, as far as possible, all intercourse with his fellow man, and sought to live and die in solitude; and so did he continue to live a life which manifestly appeared a burthen to him, till one morning, as the sun arose, not two years past, his body was found on the beach a stiffened corse, stretched out, and bleaching, as it were, in the white foam of the surf which was thrown about his lifeless remains as the mighty wave broke on the shore.

It is presumed his death was accidental—that whilst searching for shell fish, in the night, amongst the cliffs, he must have fallen from an eminence, and thus terminated his solitary existence. --Boston Atlas Thursday, January 7, 1847 (accessible at GenealogyBank).

Reprinted many times, for example in the Philadelphia Public Ledger on January 16, 1847:

Below, more reprintings from the Boston Atlas:

Posted by Scott Norsworthy at 10:27 AM