Deep into Melville's 1852 novel Pierre; Or, The Ambiguities, readers belatedly learn that the young hero Pierre Glendinning was a writer, and already famous as the author of popular verses on comically trivial themes. As disclosed in the satirical chapter on "Young America in Literature," Pierre had been invited to lecture before the ridiculously named

"Urquhartian Club for the Immediate Extension of the Limits of all Knowledge both Human and Divine."

The joke, in part, is on the vanity of philosophers for whom nothing could be deemed unknowable or beyond the grasp of human intellect. Melville specifically makes fun of Unitarian minister Orville Dewey, as Hershel Parker shows in Herman Melville: A Biography Volume 2, 1851-1891 (Johns Hopkins University Press, 2002). Dewey had recently delivered a popular series of lectures on The Problem of Human Destiny, a preposterously, almost blasphemously grandiose theme that Melville incorporates in a mock-formal letter of invitation from the local lecture committee in Zadockprattsville. Addressing Pierre as Author of the 'Tropical Summer,' &c., the chairman proposes "Human Destiny" as a suitable lecture subject for a teenaged maker of miscellaneous sentimental verses and fragments of prose. Another target of Melville's satire is transcendentalism, particularly as expounded by American disciples of Thomas Carlyle. The most obvious pointer to Carlyle and his influence appears in the super-Scottish name of the committee chairman, "Donald Dundonald." More broadly, as discussed by Tom F. Wright in Herman Melville in Context, edited by Kevin Hayes (Cambridge University Press, 2018) the fictional lecture-committee letter in Pierre finds humor in the rural pretensions of the lyceum movement in America. Beyond that, as remarked by C. S. Durer in Herman Melville, Romantic and Prophet (York Press, 1996), the lecture invitation burlesques "the ludicrousness of atheneums and, even more so, the general ludicrousness of what passes for the pursuit of knowledge" (164).
But why "Urquhartian?"
When they bother to notice, Melville scholars usually gloss the name as a reference to seventeenth-century British writer and translator Thomas Urquhart. Thus explicated in the back of the Penguin Classics Pierre (page 377), edited by William C. Spengemann:

In his notes to the 1949 Hendricks House edition of Melville's Pierre, Henry A. Murray skipped over the letter from Zadockprattsville inviting Pierre to lecture there on Human Destiny, and made no mention of the Urquhartian Club.
The perceived allusion to Thomas Urquhart in Melville's imaginary Urquhartian Club fits well enough as a play on the family name, and with reference to the reputation of Sir Thomas as one of the more notable Scottish Eccentrics.
Particularly worthy of satire according to David Irving in the second volume of Lives of Scotish Writers (Edinburgh, 1850), the "extraordinary career of genealogy" in which Urquhart fantastically "traces his descent from Adam to Noah" and beyond. Understood as part of the satire, the association of Urquhart with François Rabelais might also evoke the outrageous comedy of Gargantua and Pantagruel, nominally enlarging the club's stated mission of extending knowledge while undercutting its seriousness.
On the other hand, they don't call it the Rabelaisian Club. And Pierre has us laughing at the letter, not with its writer Dundonald, who sounds intensely serious, rather the opposite of jolly Rabelais. Melville seems to envision the Urquhartian Club as something like Philosophers-without-Borders. That limitless pursuit of knowledge might be overreaching, more Satanic than Rabelaisian, is signaled in the grasping for "Divine" as well as "Human" knowledge, and also in the proposed lecture subject of Human Destiny. Maybe we need a supplementary honoree. Happily, Thomas is not the only Urquhart implicated in Melville's Urquhartian Club. More immediately, for the author of Pierre and the novel's first readers in 1852, the term Urquhartian would have conjured up a living namesake: not Thomas but David Urquhart.
In Melville's epic religious poem Clarel: A Poem and Pilgrimage in the Holy Land (1876), one of two unnamed speakers in an overheard conversation recalls David Urquhart as a vain, unreliable, and "Eccentric ideologist." By then Urquhart was out of vogue, "obsolete." In 1852, however, Melville and his contemporary readers had a direct and readily accessible point of access to the ideas of David Urquhart via the Harper edition of Urquhart's book The Pillars of Hercules, and in the review that appeared under the title "Urquhart's Pillars of Hercules" on pages 5-7 of The Literary World volume 7 for July 6, 1850.
If he did not write it for the New York Literary World (a possibility worth following up, considering that Melville's pseudonymous review-essay Hawthorne and His Mosses would be published in two parts by the same journal in August 1850, only a month later), Melville as a reader might have been entertained by the light satire of the Urquhart family lineage that opens the anonymously published review:

We shall not wonder at the learning of this book, if we reflect upon the antiquity of the author's family, which is clearly traced by his ancestor, Sir Thomas Urquhart, it is said, all the way down quite from its founder Adam. Antiquarian lore must have come to such a man as an inheritance; and the Hebrew and other roots been the daily fare of his childhood.

The title of Urquhart's 1850 book of course alludes to the Strait of Gibraltar. Throughout, the reviewer takes a kind of amused pleasure in Urquhart's dubious yet entertaining displays of universal learning:

There is an amusing play of the imagination among etymologists and antiquarian travellers, in running up the genealogies of speech and customs to their tiny sources among the shadows of the dim and distant past. Our traveller is, perhaps, not entirely exempt from a slight degree of quixotism, any more than the many others who have bestridden their Rosinantes before him. But though enthusiasts, deep-grounded in ethnology, are very serious themselves in their laborious excavations of long-interred knowledge, they nevertheless exhibit a smack of humor to lookers-on like us. Does not genuine wit, for instance, flow from the ingenious lucubrations of Horne Tooke, or the learned Noah Webster, when, with a flash of light, they reveal the dark relationship of obscure, forgotten etymologies, and tickle us by sudden shifts of phrase with unexpected surprises, which everybody knows to be the soul of wit?

One of several excerpts from Pillars of Hercules relates Urquhart's visit to a "gambling establishment" or "club" in Tarifa, Spain. Repeating Urquhart's word club, the reviewer highlights "antiquarian theories" suggested by the peculiar brand of Andalusian cards they used "in a certain club," and the earnest imitation of English and French models of government by "grave politicians of this club."

Urquhart's diction, adopted by the anonymous reviewer in the Literary World, may have inspired Melville to denominate the "Urquhartian" organization a "Club" rather than another term like "Society" or "Lyceum" or "Association." Wrapping up, the reviewer summarizes Urquhart's Pillars as a narrative reconstruction of

"interesting and learned travels, composed of a mosaic, where natural philosophy and imagination, archaeology, the arts, military and descriptive, ethnology, history, and political science, have each contributed a characteristic stone."

The New York Spectator (June 10, 1850) treated Urquhart's characteristic "desultoriness" as a virtue since "in such moods he lets the reader into minor things which otherwise might have been overlooked, and their revelation adds greatly to the engrossing interest of the work."

The more substantial, and less cheerfully tolerant review in the London Spectator was reprinted in the March 2, 1850 issue of Littell's Living Age volume 24:

Mr. Urquhart takes an oriental bath; and thereupon writes a disquisition on bathing among the Romans, the Moors, and the Orientals, and non-bathing among some other peoples, ourselves included, with a passing touch on cheap bath-houses, and the Mosaic and Moslem notions of uncleanliness. The traveller went on a sporting excursion, though he seems to have killed nothing; but he ate of the national dish called kuscoussoo, and anon he favors the reader with the whole story of it; how it is made, which is practical information—how to eat it—what authors have said of it—bread compared with kuscoussoo; including a digression upon wheat and its original country, which is not known to Urquhart, but he makes up for it by describing the origin of the “damper” of New South Wales, says a word on Indian corn, pronounces “England in the art of cookery behind every other people,” informs the world that pilaf is never eatable “when made by a Christian,” and closes the topic with some remarks on teeth. In the course of his excursions Mr. Urquhart set eyes on the Moorish haik; which he traces to the garden of Eden, to father Abraham, to the Jews in the wilderness, to the Greeks, to the Romans.

Delightfully or damnably digressive, with a passion for endless "extension of knowledge" (Pillars of Hercules volume 1, page 157), this Urquhart seems the true namesake of Melville's fictive "Urquhartian Club for the Immediate Extension of the Limits of all Knowledge both Human and Divine."


A few years after Melville probably alluded to David Urquhart in Pierre (1852), Urquhart definitely and explicitly referenced Herman Melville in The Effect of the Misuse of Familiar Words on the Character of Men and the Fate of Nations (London, 1856). In support of his contrarian view of civilization, David Urquhart quotes this passage from chapter 17 of Typee, Melville's first book:

* "The fiend-like skill which we display in the invention of all manner of death-dealing engines — the vindictiveness with which we carry on our wars, and the misery and desolation which follow in their train, are enough of themselves to distinguish the white civilized man as the most ferocious animal on the face of the earth." — Herman Melville's Marquese Islands. 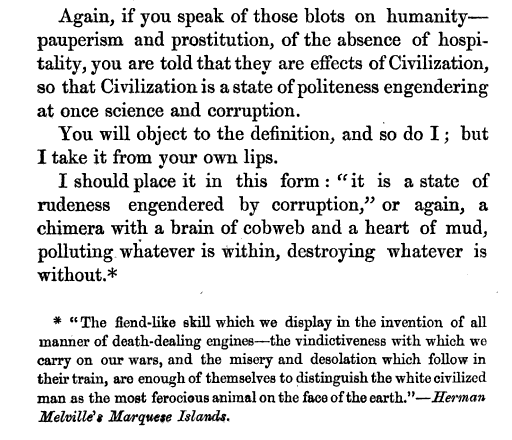 Two decades later, Melville worked Urquhart into one of the dialogues in Clarel, where somebody labels him an "eccentric ideologist." Part 4 Canto 12 Of Pope and Turk gives part of a conversation between two unidentified speakers, overheard at breakfast by Rolfe. They argue in a friendly way about virtuous actions attributed to Muslims, and the nobility of support for Poland at different times by Ottoman Turks and Roman Catholics. One stranger respectfully acknowledges David Urquhart as a notable "commentator on the East" who "stands for God" when appealing to the Pope (though a Protestant) and supporting the Ottoman Sultan in the righteous cause of Polish independence. The other guy (secular minded and evidently more of a materialist, resolved to "stand by fact") considers Urquhart a vain and "very inexact / Eccentric ideologist." 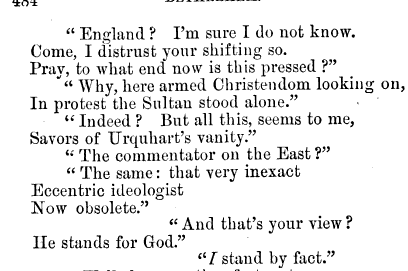 As pointed out by Dorothee Metlitsky Finkelstein in Melville's Orienda (Yale University Press, 1961; and Octagon Books, 1971) some of the published commentary to which Melville alludes in Clarel was available in David Urquhart's The Spirit of the East (London, 1838; #727 in Melville's Sources, ed. Mary K. Bercaw).

Urquhart, a British diplomat, was known as an extravagant Turkophile whose enthusiasm clouded his judgment, and Melville's reference to him as an "eccentric ideologist" accurately reflects the view of his time. -- Melville's Orienda, pages 89-90

Even so, Melville made great use of enthusiasts and their crazy causes in prose and verse. For literary purposes, the more eccentric the ideologue, the better. That anonymous New York reviewer was on to something about the appeal of "quixotism" as displayed by David Urquhart in Pillars of Herclues:

But though enthusiasts, deep-grounded in ethnology, are very serious themselves in their laborious excavations of long-interred knowledge, they nevertheless exhibit a smack of humor to lookers-on like us.  -- Literary World, July 6, 1850