The book version of Israel Potter was briefly noticed by "Cosmos," the prolific New York correspondent of the Raleigh, North Carolina Southern Weekly Post. This item appeared in letter 87 dated March 17, 1855 and published on March 24, 1855 under the heading, "Metropolitan Correspondence." The Southern Weekly Post was owned by William Dewey Cooke, and co-edited by Cooke with James A. Waddell. That "Type" in "Type-Memory" is a pun on the title of Melville's first book Typee, or a typo for Typee, or both.

Israel Potter: His Fifty Years of Exile, is a republication from the pages of Putnam's Magazine. It is a story of our revolutionary history, in which Paul Jones plays a conspicuous part. Coming from the well-known and admired pen of Herman Melville, of delicious Type-memory, it will find a very large number of new readers in its present form.
--Southern Weekly Post, March 24, 1855.

"Cosmos" was the pseudonym of William Carey Richards (1818-1892) as revealed in a subsequent notice of Harry's Vacation; or, Philosophy at Home. 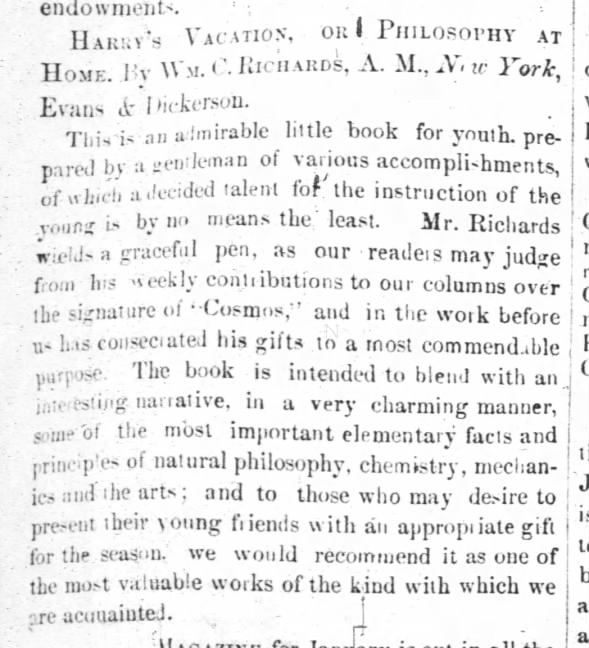 "This is an admirable little book for youth, prepared by a gentleman of various accomplishments, of which a decided talent for the instruction of youth is by no means the least. Mr. Richards wields a graceful pen, as our readers may judge from his weekly contributions to our columns over the signature of "Cosmos," and in the work before us has consecrated his gifts to a most commendable purpose...."

10 Feb 1855, Sat Southern Weekly Post (Raleigh, North Carolina) Newspapers.com
Born in London, William Carey Richards left England for the United States at the age of thirteen with his parents and siblings. The family resided in Hudson, New York for several years before moving south to Maryland and then further south to Georgia. As editor of Richards' Weekly Gazette, Richards favorably reviewed Mardi and Redburn. For the friendly reception of these and other of Melville's writings in Athens, Georgia and later Charleston, South Carolina, see the posts linked below:

In 1852 William Carey Richards moved back north to New York City. From there, starting in May 1853, he faithfully contributed more than 100 numbered letters of "Metropolitan Correspondence" to the Southern Weekly Post over the signature "Cosmos." (Many lost, it would seem, the run of the Post on newspapers.com being incomplete in every year except 1854.) Before the Raleigh newspaper folded in November 1855, Richards found employment as a Baptist minister like his father.
Posted by Scott Norsworthy at 12:37 PM