Willy and Billy, braggarts and claggarts


Like Willy the wanton Scot, Billy Budd might be described at the start of Melville's uncompleted tale as a "man without a clag," taking clag in the moral or ethical sense that Ritson gives it in the glossary to Scotish Songs: "fault, failing, imperfection." Though Billy stutters and fights when he has to, such actions are categorized early on by the narrator as natural and spontaneous, "frank manifestations" of uncorrupted nature.


"Billy in many respects was little more than a sort of upright barbarian, much such perhaps as Adam presumably might have been ere the urbane Serpent wriggled himself into his company."  --Billy Budd, Sailor - Chapter 2

A Scottish twist to Billy Budd's innocence could be whispered in Melville's reference to "Dundee" as home to the owner of Billy Budd's former ship, The Rights, short for the Rights-of-Man--a merchant ship whose "hard-headed Dundee owner was a staunch admirer of Thomas Paine." Though "God knows" where the handsome sailor came from before that, Melville at the outset emphasizes his radical innocence. 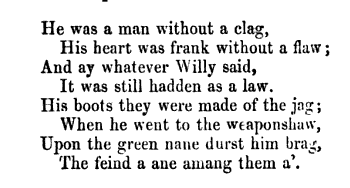 He was a man without a clag,
His heart was frank without a flaw;
And ay whatever Willy said,
It was still hadden as a law.
His boots they were made of the jag;
When he went to the weaponshaw,
Upon the green nane durst him brag,
The feind a ane amang them a’.

"Clag" may also refer to the imputation of fault. Sometimes it's spelled clagg with two g's:


"CLAG, CLAGG... 2. Charge, impeachment of character; fault, or imputation of one."  --John Jamieson, An Etymological Dictionary of the Scottish Language (Edinburgh, 1808) 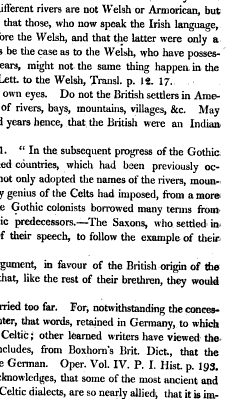 Sir Walter Scott spelled it "clagg" when he quoted the two pertinent lines from "Willy was a Wanton Wag" (without naming their source, or needing to) in a letter to Allan Cunningham:


When there is any chance of Mr Chantrey coming this way, I hope you will let me know; and if you come with him, so much the better. I like him as much for his manners as for his genius.

He is a man without a clagg;
His heart is frank without a flaw.''' --Memoirs of the Life of Sir Walter Scott

The quoted lines were printed along with Scott's letter to Cunningham in volume 3 of J. G. Lockhart's Memoirs of the Life of Sir Walter Scott which Melville presumably read after or along with his brother Gansevoort:

Melville personally thought Lockhart a "cold fish" after meeting and dining with him in London, as Parker neatly compacts the relevant 1849 journal entry in Melville: The Making of the Poet (Northwestern University Press, 2008); reprised in the Historical Note for the Northwestern-Newberry Edition of Published Poems (page 380). Still, Lockhart's biography seems a likely place for Melville to have encountered the lines via Scott's casual quotation. Complete lyrics were frequently reprinted in the 18th and 19th centuries, appearing for example in Allan Ramsay's The Tea-table Miscellany and various editions of Joseph Ritson's Scottish Songs.

The second volume of The Scotish Musical Museum gives the words and music to Willy was a wanton wag, accessible online courtesy of Burns' Scotland. The description there helpfully traces the words to "a later volume or edition of William Thomson's 'Orpheus Caledonius', in 1733" while noting that "the tune itself is generally believed to be much older than that date."

On the warship Bellipotent (or Indomitable, as Melville first called it in manuscript), impeachment of Billy Budd's character begins with false charges insinuated by Claggart. The name of Melville's envious master-at-arms thus matches his dramatic role as Billy's devilish accuser, embodying and evoking various lexical senses of clag or clagg, in particular stain, failing, and "charge, impeachment of character; fault, or imputation of one." As Melville presents him, Billy like Willy "was a man without a clag" until he switches ships and runs into Claggart.

Claggart is a claggart, one who claggs. In a gem of a note on Melville's nomenclature, Avery F. Gaskins explicates the Symbolic Nature of Claggart's Name and what's more, the grammar of Claggart's name as "a noun of agency," like braggart:


What Melville seems to have done is to add the -art suffix to the word clag and to create, thus, a noun of agency. As a braggart is one who brags, so Claggart is one who figuratively "sticks like glue" to Billy in his constant spying upon him and in his relentless persecution of the foretopman, both personally and through his henchmen. Claggart is also one who attempts figuratively to bedaub the character of Billy with false accusations and to stain it in the process. --American Notes and Queries 6.4 (December 1967): 56.

"Claggart" of course does not appear in Melville's writings outside of Billy Budd. To illustrate what Gaskins means by "noun of agency," below are two instances of the parallel form braggart used as a singular noun. The word braggart occurs twice in Mardi (1849); and once in Israel Potter (1854-5). Applied adjectivally to Ethan Allen, the example from Israel Potter seems more complicated than the relatively straightforward usages of braggart in Mardi. Ethan Allen's brag is in part a "part," a role that he assumes for self-preservation when doing battle with bullies.
Goliath
Fofi
Ethan Allen

Posted by Scott Norsworthy at 10:28 AM