Herman Melville gave his lecture on Roman Statuary in Cleveland, Ohio on January 11, 1858. Melville sounded pleasantly intoxicating if not in fact intoxicated to one listener who noted his "boozy elocution" in a review published the following week in The Ohio Farmer. As for the substance of the talk on Statues in Rome, this remarkably perceptive Ohio reviewer liked what Melville said about art, but deplored his criticism of Christianity.

According to the masthead, Ohio Farmer was owned and edited by Thomas Brown. After his death in 1867, Brown was remembered as "a writer of no ordinary ability" in Appleton's Annual Cyclopaedia.


This gentleman, already well known to the readers of light literature, as the author of "Typee," "Omoo," "Moby Dick," &c., lectured before the Library Association last week, on "Roman Statuary."

The lecture, in point of style, was very good; superior, in that respect, to nine-tenths of the lectures usually delivered. There is a dreamy beauty about the utterances of the author, suggestive of the balmy atmosphere of the South Pacific. If we are not mistaken, there is a kind of hazy-lazy air common to both; at all events, as we sat and listened to the boozy elocution of the speaker, an intoxication, as of opium or profuse odors, "lapped us in Elysean pleasures."

We think the lecturer would have it so. It seemed to us as if the writer had never forgotten his imprisonment among the Pacific cannibals, and half regretted his extradition from that physical paradise. We would venture a bet that Mr. Melville, with all his admiration for the Medicean Venus, thinks Fayaway worth a score of cold unhabited marbles.

It seemed to us as if the writer had never recovered from his captivity. His affection for heathenism is profound and sincere. He speaks of the heathenism of Rome as if the world were little indebted to christianity; indeed, as if it had introduced in the place of the old Roman heroism, a sort of trusting pusillanimity.

This under-current of regret, or sorrow, or malice, at the introduction of christianity, seemed to pervade the whole lecture, and marred one's enjoyment of the fine observation and the deep sympathy manifest in every part of the performance. His beautiful sentiments, felicitous diction, and exquisite choice of terms were merely so many chaplets to adorn a corpse. Hung about heathen manners and heathen morals, they flung their beauty and fragrance over death and corruption.

So far as the lecture was confined to the limits of the title, it was masterly and without offense. The portraiture of character was very fine. We could have sat for hours witnessing this skillful and appreciative master of ceremonies taking the robes from the pictured pages of Tacitus and putting them upon the lifeless marbles of the Vatican, and there breathing into them the breath of life, till Rome became living Rome again; but we can not reverse the proverb and believe that a dead dog is better than a living lion. The carrion-feeding eagle is not nobler than the lion of the tribe of Judah. 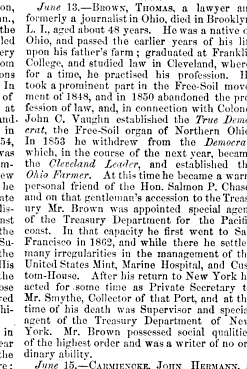 Reconstructed texts of "Statues in Rome" and Melville's other lectures are available in the Northwestern-Newberry edition of The Piazza Tales and Other Prose Pieces, 1839-1860.

Posted by Scott Norsworthy at 2:59 PM