Moby-Dick in The Church Review 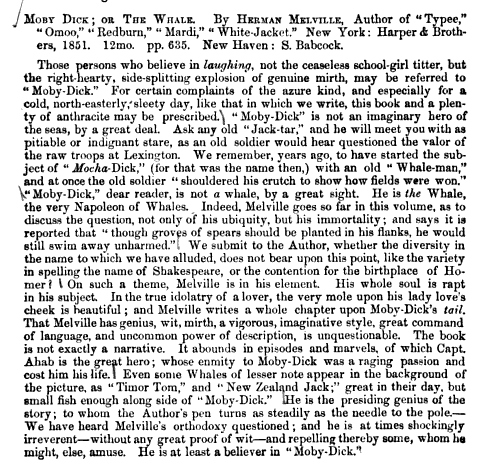 Those persons who believe in laughing, not the ceaseless school-girl titter, but the right-hearty, side-splitting explosion of genuine mirth, may be referred to "Moby-Dick." For certain complaints of the azure kind, and especially for a cold, north-easterly, sleety day, like that in which we write, this book and a plenty of anthracite may be prescribed. "Moby-Dick" is not an imaginary hero of the seas, by a great deal. Ask any old "Jack-tar," and he will meet you with as pitiable or indignant stare, as an old soldier would hear questioned the valor of the raw troops at Lexington. We remember, years ago, to have started the subject of "Mocha-Dick," (for that was the name then,) with an old "Whale-man," and at once the old soldier "shouldered his crutch to show how fields were won." Moby-Dick," dear reader, is not a whale, by a great sight. He is the Whale, the very Napoleon of Whales. Indeed, Melville goes so far in this volume, as to discuss the question, not only of his ubiquity, but his immortality; and says it is reported that "though groves of spears should be planted in his flanks, he would still swim away unharmed." We submit to the Author, whether the diversity in the name to which we have alluded, does not bear upon this point, like the variety in spelling the name of Shakespeare, or the contention for the birthplace of Homer? On such a theme, Melville is in his element. His whole soul is rapt in his subject. In the true idolatry of a lover, the very mole upon his lady love's cheek is beautiful; and Melville writes a whole chapter upon Moby-Dick's tail. That Melville has genius, wit, mirth, a vigorous, imaginative style, great command of language, and uncommon power of description, is unquestionable. The book is not exactly a narrative. It abounds in episodes and marvels, of which Capt, Ahab is the great hero; whose enmity to Moby-Dick was a raging passion and cost him his life. Even some Whales of lesser note appear in the background of the picture, as "Timor Tom," and "New Zealand Jack;" great in their day, but small fish enough along side of "Moby-Dick." He is the presiding genius of the story; to whom the Author's pen turns as steadily as the needle to the pole.— We have heard Melville's orthodoxy questioned; and he is at times shockingly irreverent—without any great proof of wit—and repelling thereby some, whom he might, else, amuse. He is at least a believer in "Moby-Dick."

Reprinted in Herman Melville: The Contemporary Reviews (pages 409-410), this unsigned review of Moby-Dick in The Church Review for January 1852 shows remarkable sympathy for the grandeur of Melville's project along with a fine appreciation of his "genius, wit, mirth, a vigorous, imaginative style, great command of language, and uncommon power of description." The reviewer especially likes the humor in Moby-Dick, commending it as a cure for the blues.

Frank Luther Mott in A History of American Magazines, 1850-1865 named Arthur Cleveland Coxe and Clement C. Moore as "leading contributors of literary criticism" in The Church Review. I don't dare suppose the author of George Castriot (1850) read Melville and wrote this notice of Moby-Dick after his retirement as Professor of Oriental and Greek Literature in the General Theological Seminary. But it would be nice to know who did.
Posted by Scott Norsworthy at 10:32 AM