The long and severe (though in places appreciative and unusually perceptive, too) review of Omoo by George Washington Peck appeared in the July 1847 issue of The American Whig Review. Comments on Peck's notably negative review may be found in newspaper notices of the Whig monthly, often  called "The American Review." In the New York Evening Mirror (July 21, 1847), Jedediah B. Auld castigated Peck's elaborate treatment as "disgusting and spiteful," without actually naming the critic. The New York Morning Courier, on the other hand, gave Peck's name and praised his "uncommon critical acumen." Peck's original review and these two published notices of it are reprinted in Herman Melville: The Contemporary Reviews, ed. Brian Higgins and Hershel Parker (Cambridge: Cambridge University Press, 1995). Here is another approving mention of Peck's review of Omoo, from the notice of the "American Review" in the Buffalo Morning Express of July 13, 1847:


Some of the literary articles of the Review are exceedingly well done. The criticism of Melville's Omoo, is written in a healthy moral tone, and displays much intellectual acumen. Melville's works have acquired a good deal of popularity, but most undeservedly, as we apprehend. Their tendency is immoral, in the highest degree, and we are glad that this fact has been demonstrated by the Review.

There is neither truth, earnestness, nor heart, in any thing he has ever published. Pleasant reading enough, both Typee and Omoo, if we could be rid of the idea that the writer was sneering, false and vicious—a mere sensualist, boasting all the time, by intimations of his uninterrupted successes with the savage maidens. We are not disposed to believe him so profligate as he represents himself. Such a combination as a licentious man, vaunting his triumphs over female purity, whether savage or civilised, rarely occurs. The wretches in society who destroy female reputation, are not the wretches to do any other mischief.

Who edited the Morning Express in Buffalo, New York?

That would be Almon Mason Clapp, the man who founded the Buffalo Express in 1846. According to the section on "The Newspaper Press" in A History of Buffalo, the first editor of the Buffalo Morning Express was James McKay. But Mckay was

William Erigena Robinson, aka "Richelieu," had been Greeley's editorial assistant and Washington correspondent. 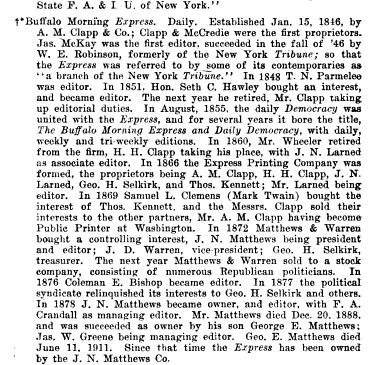 Greeley associate and new editor of the Buffalo Morning Express William E. Robinson might be the writer who favorably noticed Peck's unfavorable review of Omoo. The dim view of Omoo echoes influential comments Greeley himself had made in a hit piece that was published in the Weekly Tribune on June 26, 1847. Those bad notices by Greeley and Peck revealed, as Hershel Parker shows in a gem of reception history, that:


"Typee had made Melville the first American author to become a sex symbol."
--Herman Melville: A Biography, Volume 1 (Baltimore and London: The Johns Hopkins University Press, 1996), 530.

In 1852 A. M. Clapp "took the editorial direction of the paper on himself," again according to the History of Buffalo. So then, Almon Mason Clapp could be the Buffalo editor who looked into The Confidence-Man ten years later, and did not like it: 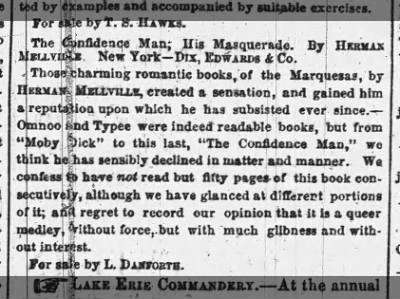 Those charming romantic books, of the Marquesas, by HERMAN MELLVILLE, created a sensation, and gained him a reputation upon which he has subsisted ever since.— Omnoo and Typee were indeed readable books, but from "Moby Dick" to this last, "The Confidence Man," we think he has sensibly declined in matter and manner. We confess to have not read but fifty pages of this book consecutively, although we have glanced at different portions of it; and regret to record our opinion that it is a queer medley, without force, but with much glibness and without interest.

Posted by Scott Norsworthy at 9:37 AM