Lord of life, all praise excelling - words by Samuel Birch 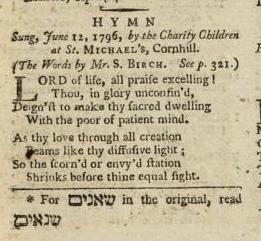 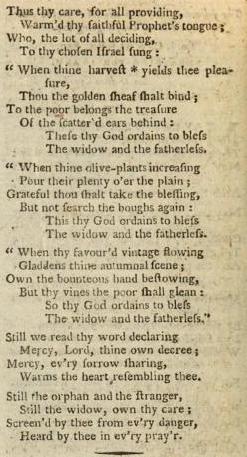 Samuel Birch (1757-1841) the gifted "dramatist and pastrycook" wrote the original words to the Hymn that begins "Lord of life, all praise excelling." Titled "A Charity Hymn," Birch's hymn was incorporated in the expanded hymnal of the Protestant Episcopal Church, as presented in early American editions of The Book of Common Prayer.

In the revised version, three early instances of "humble" replace three different words in Birch's "Hymn" as published in The Gentleman's Magazine for July 1796: "sacred," "patient," and most interestingly, "envy'd."

In A Dictionary of Hymnology John Julian mistakenly ascribed the lines to Clement C. Moore. How the error happened I don't know, but Julian's 1892 mis-attribution to Moore was corrected with publication of the June 22, 1808 letter from Joseph Grove John Bend to Bishop Hobart, in the 1912 edition of the Archives of the General Convention (ed. Arthur Lowndes). All three revisions to "humble" already appear in the text of "A Charity Hymn" that Bishop Hobart received in the 1808 letter from Joseph Grove John Bend.

Posted by Scott Norsworthy at 9:55 AM