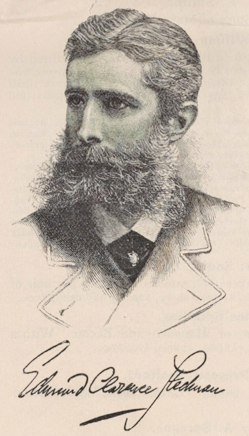 In a long, long inventory of one-hit wonders, Herman Melville's friend E. C. Stedman made sure to honor "'Twas the Night Before Christmas" and its "venerable" author:


But which of all the asteroids that have passed before our vision—whether tinged with a domestic, patriotic, amorous, or sombre light—will be longer or more lovingly regarded than the children's own poem and dearest—" 'Twas the Night before Christmas?" written for them so daintily by a sage college professor, Clement C. Moore, to wit, long time a resident of this old Dutch city, and deceased (peace to his ashes!) hardly more than four or five years ago. "A Visit from St. Nicholas" is dear to the little ones for its exquisite fancies and the annual legend, and to us all for our beautiful memories of childhood and home. It is linked with the natal festival of Christendom, is entirely true to its purpose, and finished as deftly as if the author had been a professional poet. Few of those who were his contemporaries, and who know every word of this sparkling fantasia, have been familiar with the details of his quiet and industrious life. He was born in 1779, and grew up a studious philologist, as his Hebrew and English lexicon, issued in 1809, still attests. Twelve years afterward he was made Professor of Biblical Learning in the New York Episcopal Theological Seminary, and more lately took the chair of Oriental and Greek Literature. Despite all this, and rich besides, he wrote poetry, and a volume of his rhymes appeared in 1844. They were of an ephemeral nature, except the poem which I would have gone far to hear him repeat in his old, old age, and for which my younger readers must always remember his venerable name.
--The Galaxy Volume 7, January 1869

When Stedman published this magazine piece in 1869, Moore's "sparkling fantasia" was already immortal and counted among the most joyful of Christmas rites.
Posted by Scott Norsworthy at 6:09 AM