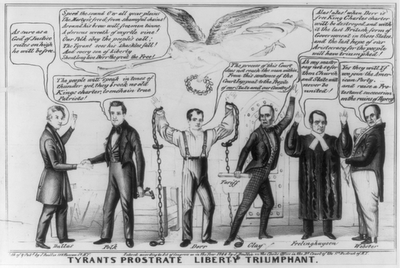 In 1843 the New York Express recalled that Gansevoort Melville's "first debut as a public orator was in favor of Dorr the Rhode Island runaway” ("Great Mass Meeting of Irish Repealers in the Park"; reprinted in the Richmond Whig on June 20, 1843).
Below we find Gansevoort arguing for the extension of democratic voting rights in Rhode Island in what must be one of his earliest political speeches, close in time and theme to that "first debut" in support of Thomas Wilson Dorr and the Dorr Rebellion.

A very curious, cool, dispassionate, hard, unenthusiastic meeting, was held on Wednesday at Tammany Hall, relative to the present crisis in the affairs of pretty little Rhode Island. The Hall was about half full. There was a great deal of talk, but no cider—we mean enthusiasm. It had more the appearance of a root-beer assemblage—gathered together to “head off Captain Tyler,” in a small way, about his letter to the Governor of Rhode Island; but the lion-spirit of the democracy did not shake his mane, nor give a roar worth a button….

MR. MELVILLE then rose, and said he was sorry Eli Moore and Mr. Parmentier were not there. They could speak so much better than him, and so could Aaron Vanderpoel. [Cheers.] He labored under great disadvantages. [Cheers] The worthy Chairman was great at compression. [Cheers] He was not. [Cheers] This meeting would assure Rhode Island of the sympathy of New York. Freemen should not be coerced into a charter which the people had despised and rejected—That charter dates from 1683. It’s the last relic of British oppression in this country. (Cheers) The people of Rhode Island had so much wisdom and purity, that they had borne it so long. Its two obvious features were inequality of representation and the property qualification. Portsmouth with 1700 inhabitants sent as many men to the Assembly as Providence with 23,000. The property qualification is a freehold real estate qualification. And a man can’t vote for a legislator, although they tax him as much as they please. This struggle began thirty years ago. In 1829 petitions poured into the Assembly, and they were laughed at, and insult was added to injury. Since then the people toiled. In 1841, a spirit was provoked, that will never be allayed till the people get universal suffrage. [Cheers.] Here Mr. Melville went into a history of the late troubles in Rhode Island, and the rejection of the Assembly’s constitution by 676 votes. He also denounced the Algerine Act, and called it an act for the propagation of constructive treason generally. The people have rightfully elected officers under their constitution. The others chose to live under Charles’s charter, who though dead 200 years, has still some very dutiful subjects now living in Rhode Island. And who was Charles 2d? A pitiful, profligate abandoned fellow, who, if he was living now in New York, couldn’t be elected Constable even for the 6th Ward; and his appropriate sphere, would be behind the counter of a perfumer’s store dealing out essences to the moustached fools and loungers of Broadway—(Cheers.)—or else he’d be in a brothel with panderers, procurers, and pimps. (Tremendous cheers) The great point contended for by the people of Rhode Island was a universal free suffrage. This had been tried in 22 States out of 26, and works well. Their opponents insist on a property qualification. And what is wealth? The sweat of the poor and the blood of the brave. (Cheers.) This is the old Federal plan to detract the capacity of the people for self government. But the tide of public opinion is sweeping on. Can they stand up against it? Let them try it if they dare. When they shall have rolled back the Amazon, and damned it up with bulrushes, and shaken the Andes to their base, then they may do it, but not before. (Cheers.

Posted by Scott Norsworthy at 9:52 PM