barbarous involation of a transcendental allegory

After further review the word involation looks like a typo or alternate spelling for involution, meaning the "action of involving or enfolding" and "state of being entangled" according to Webster's Complete Dictionary (New York: Harper & Brothers, 1846).

Another find at genealogybank.com which has a good run of the Picayune, with plenty of "New York Correspondence" from "R" and others. Mardi is a great book that will get some respect, one of these days. And we love "R" anyhow for saying "I know not his equal in English literature" after three two-and-a-half books.

… I am glad to see the announcement of a new work in press by the Harpers, of the brilliant but erratic Herman Melville. It is entitled “Redburn, or the Sailor-Boy—Confessions and Reminiscences of a Gentleman’s Son.” Melville is at home on the deck of a vessel, and can tell as good a forecastle story as any tar that ever handled a marlin-spike. He made a blunder in “Mardi,” by winding up his jovial and flashing pictures of the sea in the barbarous involation of a transcendental allegory, in which all truth was intended to be shadowed forth on poetry, philosophy, politics, religion, love, literature, good eating, and what not; but he broke down dead before he got half through the work, and every reader I know of who has tried to finish it, has shared the same fate. But let Melville “fling away ambition” and content himself with spinning a regular yarn, I declare, I know not his equal in English literature. His “Typee” set half the young men in New York and Boston mad after the peerless vision of his Eve-like Fayaway, and if it had not been for the fear of being eaten alive, they would have gone off in a body to the spicy Eden groves of Nukaheva. “Rudburn,” [sic] I think, will beat “Typee,” as reality is often better than romance. 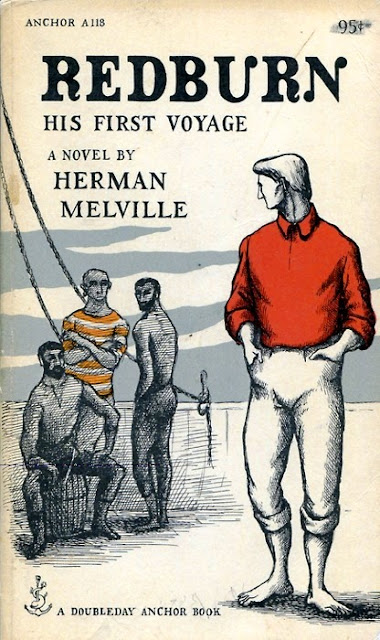 Posted by Scott Norsworthy at 12:58 PM