Where is the Brass Drum?

Here's a newspaper editor in 1937 asking the same question I did in the post on the centennial of Washington's birthday in Albany New York.

WHERE IS THE BRASS DRUM?

THE following is from Munsell's Annals of Albany, Vol. IX, Page 243:

— Feb. 22, 1832 — The military celebrated the centennial anniversary of the birth of Washington. The 89th and 246th Regiments sat down to dinner at Crosby's Long Room and the Albany Republican Artillery at Foote's Ft. Orange Hotel. Col. Peter Gansevoort on this occasion presented to the Artillery a large brass drum, a trophy of the Revolution, taken from the British on the 22nd of August, 1777, at Ft. Stanwix by his father, Brig. Gen. Peter Gansevoort.

What became of this brass drum?

Has its identity been lost; is it stowed away in some garret, or like many another historic relic long since has it passed through the scrap heap to oblivion? Does any reader know?

If found, it would be a museum piece of inestimable value. --Albany, NY Knickerbocker Press, April 2, 1937 via fultonhistory.com

Or how think you it would be with this youthful Pierre, if every day descending to breakfast, he caught sight of an old tattered British banner or two, hanging over an arched window in his hall; and those banners captured by his grandfather, the general, in fair fight? Or how think you it would be if every time he heard the band of the military company of the village, he should distinctly recognize the peculiar tap of a British kettle-drum also captured by his grandfather in fair fight, and afterwards suitably inscribed on the brass and bestowed upon the Saddle-Meadows Artillery Corps?

In 1877 Uncle Peter's daughter, Melville's cousin Catherine (Kate) Gansevoort Lansing managed to procure the real thing, a treasured relic of the Revolution, for display at the centennial celebration of the Battle of Oriskany:

... Mr. SEYMOUR exhibited the revolutionary relics. Among these was the brass snare drum, sent up from Albany by Mrs. LANSING. On the brass coat of the drum was the following inscription :

" Presented by Peter Gansevoort, of the city of Albany, counsellor-at-law, to the Albany Republican Artillery Company, on the 22d February, 1832."

"Taken from the enemy on the 22d Aug., 1777, when the British army under Gen. St. Leger, raised the siege of Fort Stanwix, which fortress had been valiantly defended by the garrison under the command of Colonel Peter Gansevoort for 21 days."

Just five years later, this very same brass drum was re-gifted to the State of New York--fittingly on February 22, 1882, George Washington's 150th birthday. Transcribed in part below, the long account of the ceremony published in the Albany Times on Wednesday evening February 22, 1882.
In his formal address, Captain John Palmer (future Commander-in-Chief of the G. A. R. and New York Secretary of State) appears to say that Peter Gansevoort (1749-1812) the war hero gave the drum to the Albany Republican Artillery. Impossible, of course, since that General Gansevoort, the Hero of Fort Stanwix, had been dead twenty years. In fact, it was the Hero's son Peter Gansevoort (1789-1876) the lawyer and politician who bestowed the drum on George Washington's 100th birthday. Confusingly, the son (Herman Melville's uncle and the dedicatee of Clarel: A Poem and Pilgrimage in the Holy Land) also was respectfully addressed as General by virtue of his service from 1819 to 1821 as Judge Advocate General of the New York State Militia, under Governor DeWitt Clinton.

BRILLIANT CELEBRATION IN THIS CITY

Presentation of War Trophies to the State--Eloquent Address by Capt. John Palmer, and Response by Adjt.-Gen. Townsend--Parades, Banquets, Etc.

The fine weather overhead this morning, compensated for the bad condition of the streets and gave token that our citizens were to enjoy a brilliant celebration. From the flag staff on the old capitol, as has been customary for the last seventy-three years floated the star spangled banner. The national colors also floated from the armory of the Washington Continentals, but the halyards and pulley-blocks on many of the flag staffs throughout the city were frozen, which will account for there not having been a more general display of bunting.

Between two and three o'clock this afternoon, Post 5 G. A. R., preceded by the Albany City band, proceeded from their quarters to the city building, where the veteran members of the Albany Republican Artillery were received and escorted to the assembly chamber of the old capitol, where was to take place the presentation of the drum used in the war of the revolution, the flag used in the war of 1812, and the portrait of Col. Mills. On arriving in the chamber, it was found that a large number of people had assembled. An appropriate air was played by the band, and the quartet under the leadership of Prof. St. John sang "Star Spangled Banner;" after which, the Rev. S. M. Williams offered a prayer. Mr. Elias P. Hale then introduced to the audience Capt. John Palmer, who made the presentation speech.

Fellow citizens: We have assembled here to day to present to the state of New York two memorable trophies, long kept in sacred custody by the veteran "Republican Artillery" of this city. The one of these trophies carries our minds back to the time when not only the fate of Albany, but the future of our state and the destines of our young republic hung in the balance, to be decided largely by the valor and endurance of that little band which, at Fort Schuyler, formerly Fort Stanwix, now Rome, held at bay St. Leger with his English troops, Canadian recruits and Indian allies, and finally compelled them to raise the siege and retreat in wild disorder. The other brings us to the second war, where the infant republic again demonstrated its ability to resist the power of England's mighty arm. We are gathered to commit these trophies to the state in order that they may be deposited for safe-keeping with the relics which attest not only the courage of the Union, but demonstrate the ability of a free people to save themselves from internal dissensions as well as from external assaults. The first of these trophies is this drum, which bears the following inscription:

"Taken from the enemy on the 22d day of August, 1777, when the British Army under Gen. St. Leger raised the Siege of Fort Stanwix, which Fortress had been valiantly defended by the garrison, under the command of Colonel Peter Gansevoort, for twenty-one days. John Iggett, Capt.; John F. Strain, 1st Lieut.; Charles Seans, 2d Lieut."

"Presented by Peter Gansevoort of the City of Albany, counsellor at law, to the Albany Republican Artillery Co. on the 22d day of February 1832."

It will thus be seen that just fifty years ago, to-day, the honored Peter Gansevoort, who in his youth was a brave commander in war and who in his maturer years served the people faithfully in the discharge of a variety of public trusts, committed this highly prized trophy to the care of the "Albany Republican Artillery." In his speech on that occasion Gen. Gansevoort said:

"Its music was heard in those days of peril; it beat in unison with the war-whoop and yell of the merciless savage on the bloody field of Oriskany. It sounded the charge and animated the courage of the enemy at Fort Stanwix; but it also sounded his retreat, and was taken from the enemy in the hour of his flight. To you, the successors of those brave volunteers, Mills and Clark, who fell in battle while gallantly resisting the invasion of a foreign foe, I present this drum, with the hope that it has sounded its last retreat, and that when its beat shall call the Albany Republican Artillery company to arms in the service of their country, they will inscribe upon their banners the deeply-rooted sentiments of the soldier and statesman of the revolution, 'We prefer liberty to life, and death to dishonor.' "

We now in turn entrust this relic permanently to the care of the Empire state....

... Adjt. Gen. Townsend received the trophies, and made an appropriate reply.

Capt. Palmer: Having the supervisory care of the bureau of military statistics, and of the trophies and relics of the rebellion contained therein, I am charged with the official duty of receiving from you, sir, as the organ of the donors, these sacred trophies and relics of the revolution and of the war of 1812. I am deeply sensible of the inadequacy of any words that I may utter in expressing the high appreciation entertained by the state of this generous act, which adds to her collection of the historic mementoes of the patriotism and gallantry of her sons, such stirring evidences of the bloody struggles of other and by-gone days. But I must be permitted nevertheless to thank you, sir, on its behalf and through you, that ancient and honorable company of the Albany Republican Artillery, for this gift, which, while it increases the debt of gratitude the state already owes this company, proclaims afresh in the present members the inherent patriotism of the old organization, and, to whose credit be it said, fitly proves that the memory of their old commander, the gallant Mills, is still green and abiding in their midst....

... All honor then to the memory of the brave and chivalrous Gansevoort, and to the heroic Mills, whose gallant deeds are revived today by the presence of these memorials, silent as the dead heroes they commemorate, yet ever eloquent to kindle anew the eternal fire of patriotism in every American heart. This drum, signalling above the din of battle that famous retreat of St. Leger and his beleaguering force, beat but the reveille that announced the dawn of brighter hopes in rhythmic with the echoes still floating on the air from the bell which, a year before, from Independence Hall, "proclaimed Liberty throughout the land." This blood-stained banner, at once the standard and the battle shroud of the gallant Mills; this painting, which perpetuates the lineaments of this citizen-soldier, who gave up his young life on the altar of his country; these all are, indeed, sacred and memorable relics, which I now appropriately deliver to you, Harrison Clark, a living attestation of the patriotism of later days, and charge you in your capacity as "keeper of the bureau," to see to it that it shall be no fault of yours should they fail to reach remoter generations.

The band then played another patriotic air, and the quartet sang "America," after which the assemblage dispersed. --Albany Times, February 22, 1882; found on fultonhistory.com

Today the "blood-stained banner" of the Albany Republican Artillery, one of the "sacred trophies and relics" committed to the care of the Empire State on George Washington's Birthday 1882, is preserved in the collections of the New York State Military Museum and Veterans Research Center. 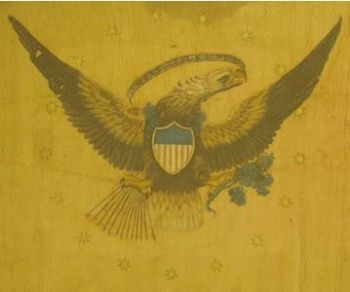 Recently I wrote to the Military Museum in Saratoga Springs asking if they know the whereabouts of the British drum also gifted to the State of New York in 1882, along with the regimental color of the Albany Republican Artillery and a portrait of Colonel John Mills. At the public ceremony recounted in the Albany Times of February 22, 1882, Captain John Palmer gave it to Adjutant-General Frederick Townsend who turned it over to the Keeper of the Bureau of Military Statistics, Harrison Clark.

"Where is the brass drum?" Perhaps some record of it may be found with papers of Gettysburg hero Harrison Clark, or documents and holdings connected with the old Bureau of Military Statistics.

Posted by Scott Norsworthy at 9:03 AM

In 1830, Herman Melville's father Allan lost his business and moved with the wife and kids from Manhattan to Albany, New York. Allan Mel... 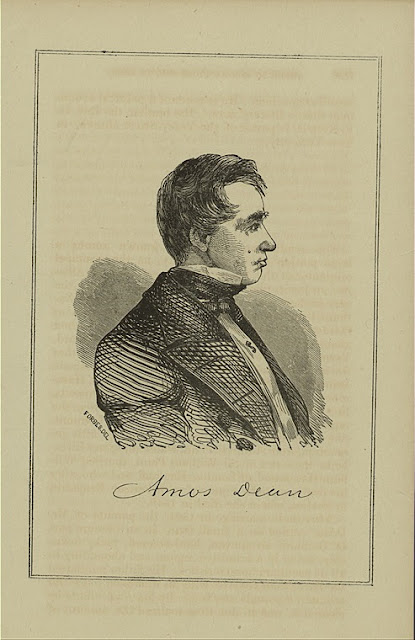