Newburyport notice of THE CONFIDENCE-MAN 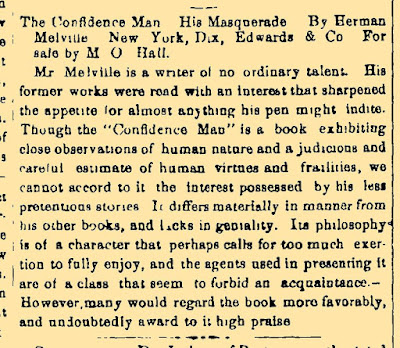 This item is reprinted on page 498 in Herman Melville: The Contemporary Reviews, edited by Brian Higgins and Hershel Parker (Cambridge University Press, 1995; paperback 2009).

Mr Melville is a writer of no ordinary talent. His former works were read with an interest that sharpened the appetite for almost anything his pen might indite. Though the "Confidence Man" is a book exhibiting close observations of human nature and a judicious and careful estimate of human virtues and frailties, we cannot accord to it the interest possessed by his less pretentious stories. It differs materially in manner from his other books, and lacks in geniality. Its philosophy is of a character that perhaps calls for too much exertion to fully enjoy, and the agents used in presenting it are of a class that seem to forbid an acquaintance.--

However, many would regard the book more favorably, and undoubtedly award to it high praise.

Also available in Digital Archives of the Newburyport Public Library:

The Newburyport Daily Herald was then edited by George J. L. Colby and Joseph B. Morss. According to his obituary in the Boston Globe (December 1, 1890), Colby once was employed "in the Salem custom house with Nathaniel Hawthorne." The 1890 obit identifies Colby as "principal editorial writer" for the Daily Herald "down to 1869." 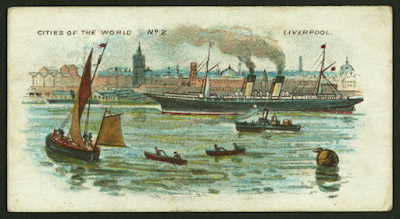