More evidence for another London Morning Herald review of THE WHALE

In the earlier post on Looking for another Whale review, I guessed there might be another and perhaps more substantial review of Melville's novel The Whale, as the First British edition of Moby-Dick was titled. Here's more evidence of the still-unlocated review from the advertisement by Melville's publisher Richard Bentley in the London Globe on November 26, 1851. Bentley's ad in the London Globe gives another quotation from the "Morning Herald," praising Melville's Whale as

"Unquestionably the production of no ordinary mind."

That makes two differently worded endorsements of The Whale in the London Morning Herald, neither of which appears in the early notice of October 20, 1851. As shown previously, another Bentley ad supplied a different text:

"This remarkable novel will be read with great delight."

Again, neither quotation that Bentley ascribes to the Morning Herald appears in the one review we already knew about, transcribed on page 353 in Herman Melville: The Contemporary Reviews, edited by Brian Higgins and Hershel Parker (Cambridge University Press, 1995; paperback 2009).

Found online at The British Newspaper Archive <https://www.britishnewspaperarchive.co.uk/>. Image © THE BRITISH LIBRARY BOARD. ALL RIGHTS RESERVED.

THE WHALE. By HERMAN MELVILLE.

IS NOW READY AT ALL THE LIBRARIES.

"Contains graphic descriptions such as we do not remember to have met with before in marine literature." --Athenaeum.

"A work of great power and beauty." --Morning Post.

"Unquestionably the production of no ordinary mind." --Morning Herald.

"Intensely interesting. It is not a mere tale of adventure, but a whole philosophy of life that it unfolds." --John Bull.

"A singular novel. The satire is biting and reckless." --Spectator.

"Displays an unusual power of enchaining the interest." --Morning Advertiser.

"The raciest thing of the kind that was ever produced." --Evening Paper.

"A most extraordinary work." --Britannia

We will see, hopefully. Scans of the 1851 microfilm now ordered from The British Library - Digitisation Services. 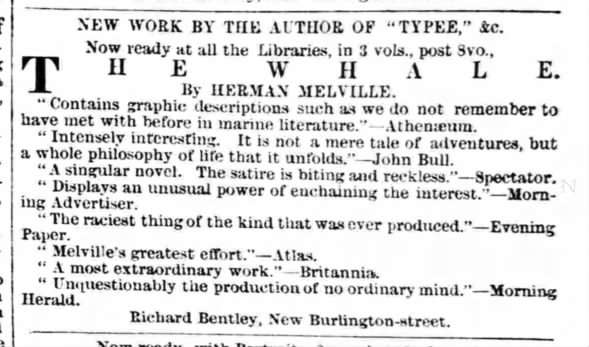 and found!
Posted by Scott Norsworthy at 8:46 AM