Looking for another Whale review in the London Morning Herald

Publisher's ads for The Whale quote the London Morning Herald as predicting,


"This remarkable novel will be read with great delight." 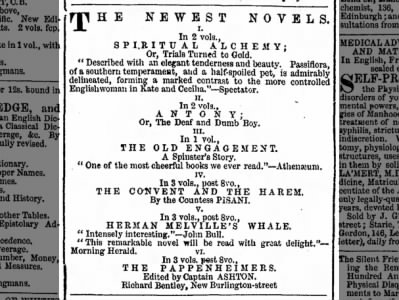 Thu, Dec 18, 1851 – 8 · The Morning Chronicle (London, Greater London, England) · Newspapers.com
Attributed to the "Morning Herald," the endorsement of Melville's Whale as a "remarkable novel" that "will be read with great delight" was reprinted in the London Morning Post (December 17, 1851) and Morning Chronicle (December 18, 1851); and two days later in the Athenaeum, Spectator, and Examiner. 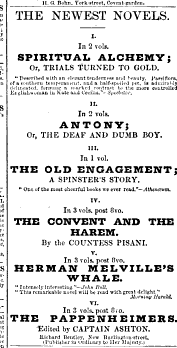 But nothing close to this sentence appears in the one collected notice of The Whale in the Morning Herald for October 20, 1851. Included as a then-recent find in Hugh W. Hetherington, Melville's Reviewers, British and American, 1846-1891 (University of North Carolina Press, 1961) page 191, the notice of October 20 in the Morning Herald happens to be the earliest known review of The Whale. It's still the first one transcribed in the Moby-Dick section of Herman Melville: The Contemporary Reviews, edited by Brian Higgins and Hershel Parker (Cambridge University Press, 1995; paperback 2009).

Unless Richard Bentley invented the quotation, it seems there was another notice of The Whale in the London Morning Herald, maybe later (and longer?) than the exceptionally early one we already know about. The other quotation, "intensely interesting," comes from the review in John Bull on October 25, 1851:


We are unwilling to part with a book so intensely interesting without placing before our readers at least a leaf or two from the sketch-book of "Ishmael," the spinner of this wonderful whale yarn.

Not yet digitized, or digitised, apparently, but The British Library does have the right microfilm reel of the London Morning Herald.

Well, Hershel Parker just the other day was saying there could be more to discover about the "wonderful appreciation of HM's genius in London." Obviously I would love to make reservations for London. Before going that far in distance and debt, I really need to learn if any fine library closer to Minnesota has microfilm of the London Morning Herald for 1851. Anybody know?

Update 03/04/2020: I just ordered grayscale scans of the 1851 reel from The British Library, Digitisation Services. Here's to Hope, and Patience...


"Imaging Services are currently experiencing a high volume of work which may also impact on the completion times of order."

Posted by Scott Norsworthy at 10:59 AM