As George Monteiro discovered, the New York Times for March 7, 1856 depicted Herman Melville's magazine story "I and my Chimney" as "a Caliot-like extravaganza." This item is transcribed in Herman Melville: Fugitive References (1845-1922), Resources for American Literary Study Volume 33 (2008; AMS Press, 2010) pages 19-93 at 34.
What looks like "Caliot" in digital versions of the original article should read Callot, alluding to Jacques Callot the French graphic artist. Callot was famous for innovative "caprices" and "extravaganzas" featuring a comic and grotesque style of caricature.

Callot's themes, as explicated in the RISD Museum guide for the 2011 exhibit, Jacques Callot and the Baroque Print:


"In Callot’s theatrical world of princes, paupers, dancers, and dwarves, virtue and evil coexist. Its inhabitants pursue peaceful or frivolous pleasures in one moment only to be confronted with — or perpetrate — torturous death in the next. Callot’s stage-like compositions might distance us from direct emotional confrontation, but they emphasize life as a performance: one in which humankind’s edifying qualities exist alongside the ridiculous and grotesque."

Callot's name had already appeared at least one time in Melville criticism, several years before the 1856 reference in the New York Times. While blasting Pierre (1852) in the American Whig Review, G. W. Peck described one of the scenes with Isabel and her guitar as a "night piece" presented "somewhat after the manner of Callot." It's interesting to think also of "Chimney" and other short fictions by Herman Melville as "stage-like compositions" after Jacques Callot.

Below are additional contemporary responses to "I and my Chimney" as first published in Putnam's Monthly Magazine for March 1856. These brief comments appear in favorable newspaper reviews of Putnam's for March 1856. None identifies Melville or any particular writer for Putnam's. Without naming the author, the New York Evening Mirror (March 11, 1856) called Melville's contribution to the March 1856 issue


a quaint story, entitled "I and my Chimney," illustrating the inexorable spirit of conservatism.

The Evening Mirror was then edited and published by Hiram Fuller.

The Pittsburgh Gazette for March 4, 1856 praised "I and my Chimney" as a "capital" piece in "a rare number" of Putnam's. 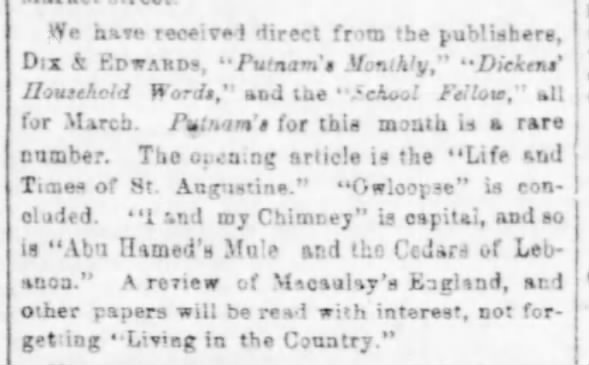 
We have received direct from the publishers, DIX & EDWARDS, "Putnam's Monthly," "Dickens' Household Words," and the "School Fellow," all for March. Putnam's for this month is a rare number. The opening article is the "Life and Times of St. Augustine." "Owlcopse" is concluded. "I and my Chimney" is capital, and so is "Abu Hamed's Mule and the Cedars of Lebanon." A review of Macaulay's England, and other papers will be read with interest, not forgetting "Living in the Country." --Pittsburgh Gazette, March 4, 1856.

The Montpelier, Vermont Green Mountain Freeman commended Putnam's as a magazine that "always contains the cream of a large corps of contributors, among which the names of our most enterprising and live authors are found." In the March 1856 issue, "I and my Chimney" struck the new editor Sidney S. Boyce as


"an illustration of home life that is too true." --Montpelier, Vermont Green Mountain Freeman, March 6, 1856.

During the Civil War, Boyce served as Captain in the 77th U. S. Colored Infantry. As reported in the Army & Navy Official Gazette on April 25, 1865, Boyce was tried for illegal use of military property and dismissed. 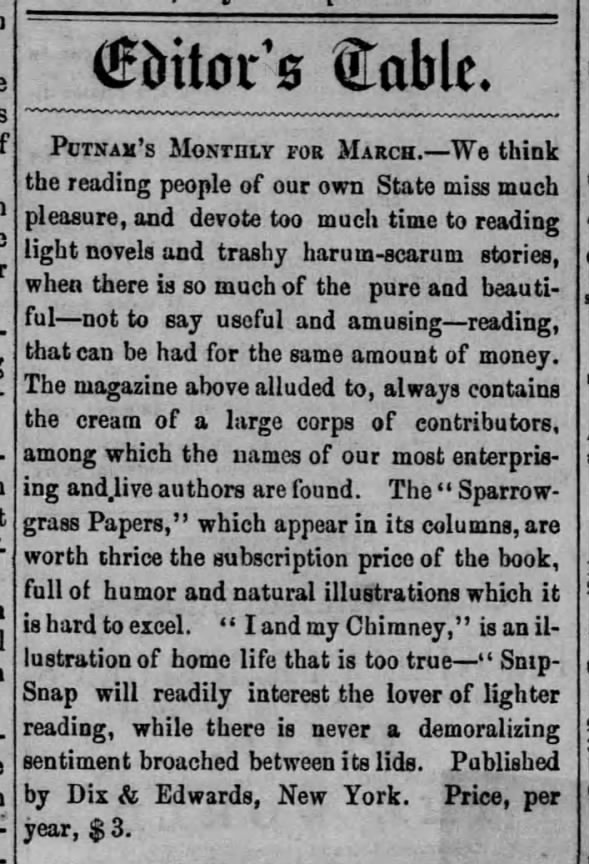 The Criterion on March 8, 1856 contrasted the "meditative" sketch "I and my Chimney" with the instructively "moral" tale, "Snip-Snap."


"I and my Chimney," and "Snip Snap," are respectively meditative and moral. We should hesitate to pronounce the last a successful effort.  --The Criterion, March 8, 1856

Despite the knock,"Snip-Snap" was popular at the time and frequently reprinted in other newspapers. The New York Times reviewer who thought of Melville's comedic "Chimney" in visual and dramatic terms as a "Callot-like extravaganza" also applauded "Snip-Snap" as "a "charming love-story."


"a New York critical weekly of high class, publishing really careful reviews, with notes on art, drama, and science. It was modeled on the London Athenaeum." 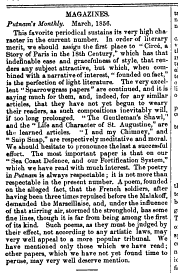 The Criterion was edited and published in New York by Charles Rudolph Rode (1825-1865) who merged it with the American Publishers' Circular and Literary Gazette.

Another brief mention of "I and my Chimney" appeared in The Country Gentleman for March 13, 1856. This was a weekly agricultural newspaper published in Albany, New York by Luther Tucker. According to Frank Luther Mott in A History of American Magazines, Tucker's editorial assistants at the time were his son Luther H. Tucker and John J. Thomas. Surveying the new issue of Putnam's magazine, one or another editor of the Country Gentleman felt "I and my Chimney" had been narrated "somewhat lugubriously."

In the Western Reserve Chronicle (Warren, Ohio) for March 12, 1856, editors Comfort A. Adams and George N. Hapgood gave the contents of the March 1856 number with this general endorsement:


"Putnam's Magazine is to the United States, what Blackwood's is to England. It is entirely original, and its articles are marked by independence and vigor of thought."

Posted by Scott Norsworthy at 11:44 AM