The Rubenstein copy of the first American edition of Moby-Dick was donated by Richard and Nancy Riess. The descriptive entry for this volume notes, along with the tipped-in autograph of the author,


"the ownership signatures of J.J. Woodward and B.W. Huxley and the pencil initials W.D.C."

Evidently this copy of Moby-Dick was owned (and possibly annotated) by Joseph Janvier Woodward (1833-1884), the distinguished Philadelphia surgeon and pioneering pathologist.

Woodward has been credited with the invention of photomicrography:

The physician J. J. Woodward was the son of Joseph Janvier Woodward (1798-1878). The initials "W. D. C." may belong with the signature--I guess they might stand for Washington, District of Columbia where Woodward after May 19, 1862 lived while working in the Surgeon General's Office. As an undergraduate J. J. Woodward wrote Ada: A Tale, published in 1852 under the pseudonym "Janvier."

For comparison with the signature in the Duke Moby-Dick, here are two similar looking autographs of the noted army surgeon and pathologist J. J. Woodward:


"As a scientific investigator and thinker his especial characteristics were the incessant labor which he devoted to the subjects on which he was engaged and his desire to obtain his data at first hand as far as possible. His turn of mind was essentially that of a critic, and his first impulse on hearing of any alleged new fact or observation relating to matters in which he was interested was to doubt, and to attempt to verify it for himself."  --1885 Memoir of Joseph Janvier Woodward, 1833-1884 by J. S. Billings.

Possibly Dr. Woodward was the reader of the Duke Moby-Dick who decided to "Skip" chapter 32, Cetology. 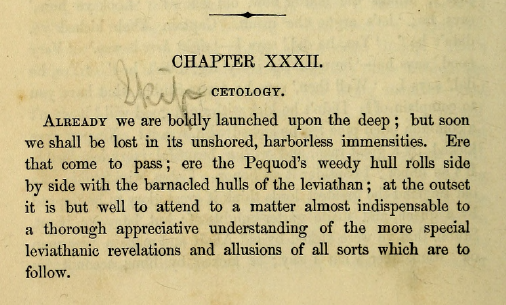 Other chapters with pencil markings include The Mast-Head, Monkey-Rope, Try-Works, Doubloon,  Dying Whale and Whale Watch; and The Candles.

In pen, one reader underscored the narrator Ishmael's lament in The Funeral over the gruesome spectacle of the whale's floating corpse under attack from sharks and scavenging seabirds:

Posted by Scott Norsworthy at 5:34 AM