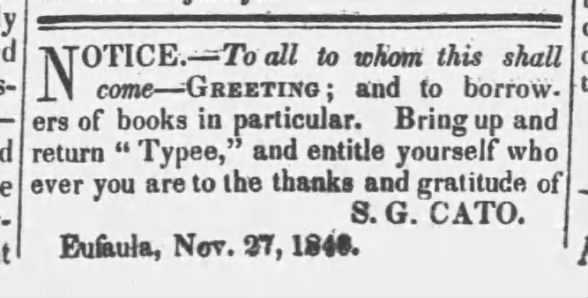 
NOTICE.— To all to whom this shall come—GREETING; and to borrowers of books in particular. Bring up and return "Typee," and entitle yourself who ever you are to the thanks and gratitude of

Georgia native Sterling Green Cato (1817-1867) was then an Alabama lawyer, hence the formality of his published notice asking for the return of Typee by an unknown or at least unidentified borrower. As Territorial Judge in Kansas,1855-1858, S. G. Cato would become notorious for (besides his drinking, gambling, and saying "de Cote" for "the court") his pro-slavery agenda and activism. In Alabama Cato and his brother Lewis Lewellyn Cato belonged to the influential secessionist group known as the Eufaula Regency. S. G. Cato died in Liberty, Missouri on October 24, 1867, at the age of 50 not 60 years as reported in the Liberty Tribune of October 25, 1867; reprinted November 2, 1867 in the viciously racist Weekly Caucasian. About which see Aaron Astor, "The Lexington Weekly Caucasian: White Supremacist Political Discourse in post-Civil War Western Missouri," chapter 11 in Bleeding Kansas, Bleeding Missouri, ed. Jonathan Earle and Diane Mutti Burke (University Press of Kansas, 2013), pages 189-204. 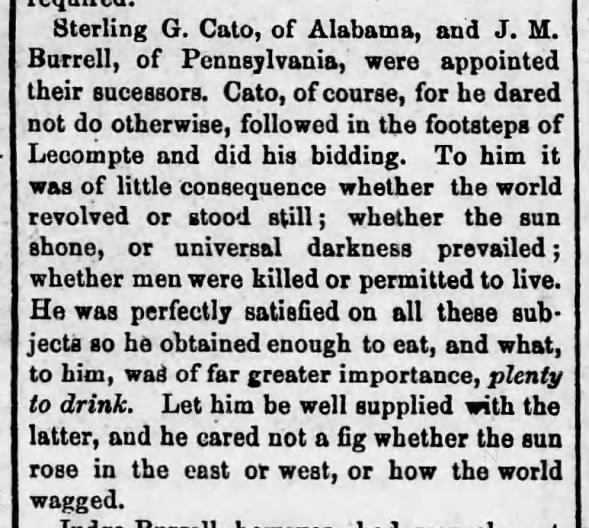