Bartleby, this is a friend....

The 1856 book version of Bartleby makes a nameless "friend" of the "broad meat-like" grub-man, whom Melville originally called "Mr. Cutlets" in the December 1853 issue of Putnam's Monthly Magazine. In the magazine version, the narrator introduced the grub-man by name:


"Bartleby, this is Mr. Cutlets; you will find him very useful to you." 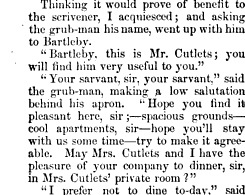 After revision, Mr. Cutlets is just "a friend."


"Bartleby, this is a friend; you will find him very useful to you." --The Piazza Tales 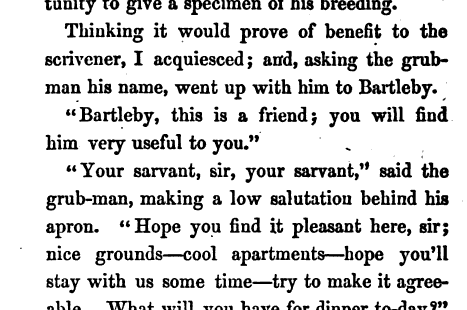 Also deleted in revision, the invitation to dine privately with both Cutlets, Mr. and Mrs.


"May Mrs. Cutlets and I have the pleasure of your company to dinner, sir, in Mrs. Cutlets' private room?"

The un-naming of Mr. Cutlets and deletion of his dinner invitation have been noted before, of course. Dismissing the Cutlets business as "inappropriate slap-stick," Egbert S. Oliver in the 1948 Hendricks House edition of The Piazza Tales (page 230) gives its judicious "removal" as "one of the principal revisions that Melville made in this story in preparing it for book publication." The Cutlets are back in the text of the 1987 Northwestern-Newberry edition of The Piazza Tales and Other Prose Pieces, 1839-1860. As discussed there in the notes (page 579), the N-N editors reject this and other revisions as suspiciously inartful and un-Melvillean "instances of toning down."

Posted by Scott Norsworthy at 8:30 AM