On New Year's Day 1824 the New-York Spectator reprinted "A Visit from St. Nicholas" from the Troy Sentinel where Clement C. Moore's immortal rhymes had lately made their first appearance in print, on December 23, 1823. Long considered the earliest known reprinting, the 1824 Spectator version is listed number 2 in Nancy H. Marshall's Descriptive Bibliography of The Night Before Christmas.

The still-anonymous Christmas poem graced the front page of the New York Spectator for January 1, 1824. On the second page there was something else, not previously recorded. For a genuine nineteenth-century stocking stuffer this Christmas Eve, Melvilliana presents a Manhattan editor's long-forgotten commendation of "A Visit from St. Nicholas" aka The Night Before Christmas:

The reader will find a number of interesting articles on the first page of this paper. We mention in particular, the fine fanciful poetry from the Troy Sentinel, describing the Christmas visit of that old inflexible and kind-hearted friend to dutiful children, SAINTE CLAUS. 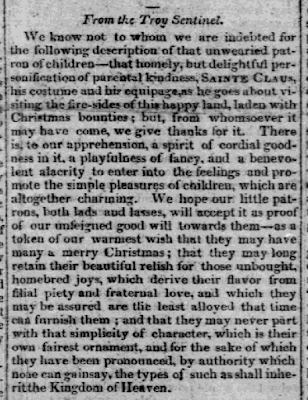 From the Troy Sentinel.

We know not to whom we are indebted for the following description of that unwearied patron of children—that homely, but delightful personification of parental kindness—SANTE CLAUS, his costume and his equipage, as he goes about visiting the fire-sides of this happy land, laden with Christmas bounties; but, from whomsoever it may have come, we give thanks for it. There is, to our apprehension, a spirit of cordial goodness in it, a playfulness of fancy, and a benevolent alacrity to enter into the feelings and promote the simple pleasures of children, which are altogether charming. We hope our little patrons, both lads and lasses, will accept it as proof of our unfeigned good will toward them—as a token of our warmest wish that they may have many a merry Christmas; that they may long retain their beautiful relish for those unbought, homebred joys, which derive their flavor from filial piety and fraternal love, and which they may be assured are the least alloyed that time can furnish them; and that they may never part with that simplicity of character, which is their own fairest ornament, and for the sake of which they have been pronounced, by authority which none can gainsay, the types of such as shall inherit the Kingdom of Heaven.

’Twas the night before Christmas, when all thro’ the house,
Not a creature was stirring, not even a mouse;
The stockings were hung by the chimney with care,
In hopes that St. Nicholas soon would be there;
The children were nestled all snug in their beds,
While visions of sugar plums danc’d in their heads,
And Mama in her ’kerchief, and I in my cap,
Had just settled our brains for a long winter’s nap—
When out on the lawn there arose such a clatter,
I sprung from the bed to see what was the matter,
Away to the window I flew like a flash,
Tore open the shutters, and threw up the sash.
The moon on the breast of the new fallen snow,
Gave the lustre of mid-day to objects below;
When, what to my wondering eyes should appear,
But a miniature sleigh, and eight tiny rein-deer,
With a little old driver, so lively and quick,
I knew in a moment it must be St. Nick.
More rapid than eagles his coursers they came,
And he whistled, and shouted, and call’d them by name:
“Now! Dasher, now! Dancer, now Prancer and Vixen,
“On! Comet, on! Cupid, on! Dunder and Blixem;
“To the top of the porch! to the top of the wall!
“Now dash away! dash away! dash away all!”
As dry leaves before the wild hurricane fly,
When they meet with an obstacle, mount to the sky;
So up to the house-top the coursers they flew,
With the sleigh full of Toys—and St. Nicholas too:
And then in a twinkling, I heard on the roof
The prancing and pawing of each little hoof,
As I drew in my head and was turning around,
Down the chimney St. Nicholas came with a bound.
He was dress’d all in fur, from his head to his foot,
And his clothes were all tarnish’d with ashes and soot;
A bundle of toys was flung on his back,
And he look’d like a pedlar just opening his pack:
His eyes—how they twinkled! his dimples how merry,
His cheeks were like roses, his nose like a cherry;
His droll little mouth was drawn up like a bow,
And the beard of his chin was as white as the snow:
The stump of a pipe he held tight in his teeth,
And the smoke it encircled his head like a wreath.
He had a broad face, and a little round belly
That shook when he laugh’d like a bowl full of jelly.
He was chubby and plump, a right jolly old elf,
And I laugh’d when I saw him in spite of myself;
A wink of his eye and a twist of his head
Soon gave me to know I had nothing to dread.
He spoke not a word, but went straight to his work,
And fill’d all the stockings; then turn’d with a jirk,
And laying his finger aside of his nose
And giving a nod, up the chimney he rose.
He sprung to his sleigh, to his team gave a whistle,
And away they all flew like the down of a thistle:
But I heard him exclaim, ere he drove out of sight—
Happy Christmas to all, and to all a good night.

And a HAPPY NEW YEAR too!!!

Posted by Scott Norsworthy at 12:26 PM