Where to find lines traced under an image of Amor threatening

In a lady's album. That is, "the lady's album of the nineteenth-century in which verses were inscribed, signed, and dated" (Proceedings of the Society of Antiquaries), a later development, alongside the autograph album, of the early modern Album Amicorum. In prose fiction, Melville has already told us how his young hero Pierre became a popular author and was besieged with requests to write in ladies' albums.


"Not seldom Pierre's social placidity was ruffled by polite entreaties from the young ladies that he would be pleased to grace their Albums with some nice little song."

Finding such requests awkward, Pierre wanted a creative way to oblige them without actually writing anything.


What could Pierre write of his own on Love or any thing else, that would surpass what divine Hafiz wrote so many long centuries ago? Was there not Anacreon too, and Catullus, and Ovid—all translated, and readily accessible? And then—bless all their souls!—had the dear creatures forgotten Tom Moore? --Pierre; Or, The Ambiguities

The dodge Pierre finally devises is to blow a kiss over them, collectively, then send them back with one real "confectioner's kiss" allotted to each lady.

Melville describes only the outside of the albums that Pierre receives, making a point to observe the sensory appeal of their "ornate bindings," and the devious manner in which the owners have them scented with expensive perfume. Melville does not say the pages were decorated with beautiful engravings. The more expensive ones were.

For a long time now the italicized poem before Melville's poem "After the Pleasure Party" has had me mystified. I kept trying to imagine the poet in the Louvre or some other museum of art, standing under a painting of Eros, and scribbling away in his notebook. Deep down I knew I didn't get it.

Reading in Zamira, a dramatic sketch (1835) by Jonas B. Phillips, I ran into the following piece, one of the miscellaneous poems collected along with Zamira, the titular verse drama. 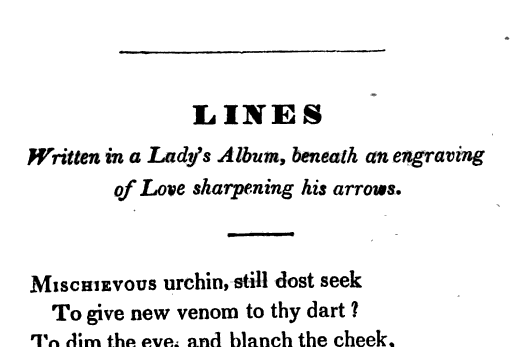 LINES
Written in a Lady's Album, beneath an engraving
of Love sharpening his arrows.

Lines? Under a picture? Of Cupid "sharpening his arrows"? Italics? The heading of these "Lines" by John B. Phillips features all the main elements of the heading to the italicized poem that introduces Melville's "After the Pleasure Party." The title of Melville's introductory poem or epigraph might serve also as a subtitle for the whole "Pleasure Party": "Lines traced under an image of Amor threatening."

Fear me, virgin whosoever
Taking pride from love exempt,
Fear me, slighted. Never, never
Brave me, nor my fury tempt:
Downy wings, but wroth they beat
Tempest even in reason's seat.  --Intro to After the Pleasure Party

Both the poem and the poem before the poem may be read as verses written ("traced") in a finely made Lady's Album, under an engraved "image" of Eros sharpening his arrows, or some other depiction of "Amor threatening."

In the same genre of verses inscribed under pictures in ladies' albums, Mary Ann Browne in Ada and Other Poems (London, 1828) offers "Lines Written Beneath a Drawing of Heart's-Ease, in the Album of a Lady, Who Was Personally Unknown to the Author."

Here's another one, merely hinting at the range of pictorial subjects that might inspire lines in a lady's album:

Pictures of beautiful autograph books on Pinterest look later than the thing I have in mind, but a real material example could be findable. The image from Godey's Lady's Book of Cupid taking aim gets at the right idea, (Beware of boys with wings and arrows) in almost the right place (popular reading for women). His wings should be bigger and fluffier though, since Melville's inscriber notes his "Downy wings." I'm still looking for a lady's album or autograph book with an engraving or other kind of illustration that shows the downy-winged God of Love, pointing. If there's a love-sonnet under it, so much the better. Leads welcome anytime.

Related post: After the Pleasure Party and Hogarth's madhouse
Posted by Scott Norsworthy at 7:13 PM