Review of Mardi in the Louisville Morning Courier

In last year's post on favorable Melville notices in Walter N. Haldeman's Louisville Courier, I identified and transcribed glowing reviews there of Redburn, White-Jacket, and Israel Potter. One item that I could not locate back then turned up today, Haldeman's ecstatic review of Mardi. I suppose it was Haldeman who praised Melville as

"a limner of unequalled power.— He is a Tenniers, a Salvator Rosa, a Claude Lorraine, and a Raphael according to the scene before him."

The wonderful popularity of this author, and its continuance, shows how substantial the merits are upon which it rests. He has no rival in his sketches of sea life. Nothing seems to come amiss to his expanded genius; his soul drinks in the full inspiration of every scene that crosses his vision, and for the time being he becomes part and parcel of it. The majesty of the Ocean in storm or tempest, its magnificent repose, the clustering islands that breathe in beauty upon its face, the mountains looming far in the distance, all the enchantments of land, of ocean, and sky, find in Melville a limner of unequalled power.— He is a Tenniers, a Salvator Rosa, a Claude Lorraine, and a Raphael according to the scene before him. There is an ample store of vitality in all the weavings of his brain. The tissue is always of the finest material, but is nevertheless very substantial. He always carries his readers with him in spite of themselves, he infuses the spirit of his scenes into all their feelings, and moves them as with the wand of an enchanter.

In the work before us we have the same graphic power that has given celebrity to his name, both in Europe and America, but it is more matured, more elevated, more careful than in his other volumes. What higher compliment could be given to his authorship than is found in the fact that the English Reviewers refused to believe that his former works were written by a sailor? They were equally incredulous about the book of Ross Browne on the Whale Fisheries, but in the superior education of our navy compared to that of England, "the flag that has braved the battle and the breeze, for a thousand years" may find a hint that its supremacy cannot live forever.

We shall make some extracts from this work soon, in order to give our readers a taste of its quality, but we beg leave to commend the work to their regard.  --Louisville Morning Courier, May 1, 1849 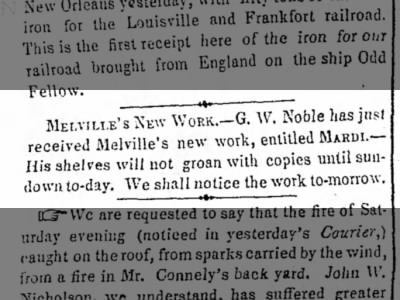 Posted by Scott Norsworthy at 8:01 AM