From the 1894 Biographical Review of Broome County, New York via Whitney Research Group:


CHARLES WHITNEY, dramatic reader and author of wide celebrity, was born at Chenango Point, now Binghamton, N.Y., April 1, 1815, a son of General Joshua Whitney, of whom see the very interesting biographical sketch on another page. The Whitney family is one of the best known in the annals of this city.

The subject of this brief memoir, who died suddenly, April 17, 1885, at his home, No. 7 North Street, Binghamton, received a good education, attending some of the best institutions of learning in the State of New York at the time of his school-days in the early part of the century. He held first rank as a dramatic reader, and was especially versed in Shakespearean literature, to which he was so devoted that every room in his house had some appropriate quotation from the bard of Avon painted on the walls. He was a man of great ability as a writer, and was a correspondent for various New York papers for many years.

At the age of forty he married Miss Emily Clark, a most gifted and intelligent lady, who was born in Halifax, Nova Scotia. She died March 10, 1892, on the home farm in the town of Conklin, N.Y., where she and the family had lived since the death of her husband. They had a family of five children, of whom only two are now living, Mary E. and Jennie J. Mary E. was born in Boston, Mass., and is an artist of rare merit, and also a well-known author. She and her sister are graduated of St. Agnes Church School at Albany, N.Y., and are brilliantly educated young women. They managed the farm in the town of Conklin, where they reside, and which consists of one hundred and sixty acres of excellent and productive land. Miss Mary devoted herself principally to her paintings, for which she receives many valuable orders; and her literary work appears in the best magazines of the day.

Mr. and Mrs. Whitney were communicants of the Episcopal church, and in politics he voted with the Democratic party.

In February 1859, Herman Melville opened for Professor Whitney in Chicago. Or put it this way: Whitney closed out Melville's Chicago lecture on The South Seas. In Melville as Lecturer, Merton M. Sealts, Jr. cited Whitney's performance as evidence of the unrefined "western" appetite for popular entertainment:


Here the atmosphere was quite different from that of the eastern lecture halls, for after Melville had finished speaking, "Professor Charles Whitney...announced his entertainment to take place this evening...and gave an admirable impersonation of the eccentric John Randolph, closing with a rendition of Boker's fine ballad of Sir John Franklin."  --Melville as Lecturer, 81-2


"Melville was most likely trapped on the stage for this quintessentially academic self-promotion." --Herman Melville: A Biography, v2.393

Despite Whitney's self-promoting title of "Professor," his career as dramatic speaker or "elocutionist" now looks more theatrical than academic. Possibly Melville enjoyed the show, if he stayed. And if, say, Whitney did his celebrated imitation of Red-Jacket. And I'm wondering, too--would Melville have known of Whitney already, before encountering him live in Chicago? In August 1838, a few months after Melville's family moved from Albany to Lansingburgh, Whitney lectured in Troy.


As advertised in the Daily Whig, Whitney would

"deliver a Lecture on the Art of Speaking, explanatory of his mode of teaching this science, and illustrate its principles, by appropriate reading and recitations--exhibit a natural and easy mode of acquiring the beautiful falsetto, and the Vocal Echo,--Mr. Whitney will also, explain the amusing art of Ventriloquism, or Vocal Modulation." 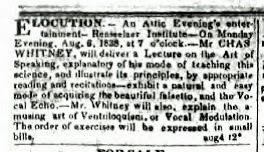 Notice and ad both found at Fulton History.


In March and early April 1840, Whitney lectured at the Apollo Saloon in Albany. His advertised "third Lecture" included thrilling selections from mostly English authors, starting with scenes from Shakespeare's Merchant of Venice, Lear, and Richard III:

--from the American Masonic Register and Literary Companion (March 14, 1840).


Mr. WHITNEY delivers his fifth lecture on Oratory, this evening at the Apollo Saloon, Green street. Among the compositions selected in illustration of his subject, are Milton’s Apostrophe to Light, and the Female Maniac, by Lewis—both admirable subjects—the former as portraying in sublime yet touching language, the loss of those “orbs” for which the lofty conceptions of the poet, could scarcely compensate, and the latter exhibiting a fine mind gradually sinking beneath a weight of injustice and misery into madness.— Mr. W’s delineation is perfect. These two pieces are alone worth the whole price of admission, and no doubt a goodly portion of our citizens will avail themselves of this truly intellectual entertainment. H.

Posted by Scott Norsworthy at 8:59 AM