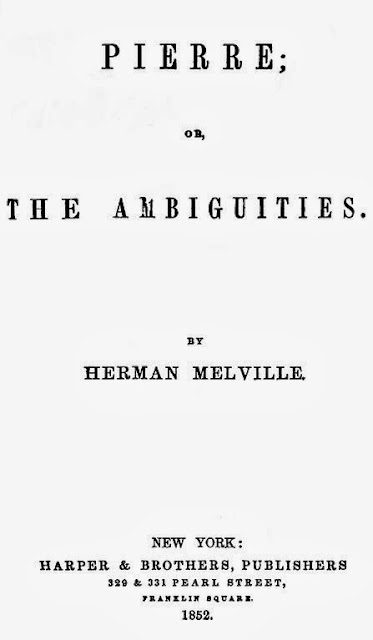 
LITERARY.—Late New York papers contain the following notices of American writers: Washington Irving is in the city of new York on the business of the Cooper Monument Committee, preparing the celebration at which Bryant is to deliver the oration. Nathaniel Hawthorne has exchanged the ice and snows of Lenox for a shelter at Newton, near Boston. Herman Melville, at Pittsfield, is said to be engaged on a new work, soon to be issued by the Harpers….

Knowing yet somewhat premature, in the event. Well, even with the late angry additions it was all ready to go by mid-April, but Melville's unsuccessful wrangling with London publisher Richard Bentley delayed matters until the book actually came out in late July 1852.

Wonder which NY papers had this item and the Hawthorne news first, and when.
Posted by Scott Norsworthy at 3:02 PM

Email ThisBlogThis!Share to TwitterShare to FacebookShare to Pinterest
Labels: Pierre