Miracle roses in ROSARY BEADS, borrowed from the real LIFE OF SAINT ELIZABETH 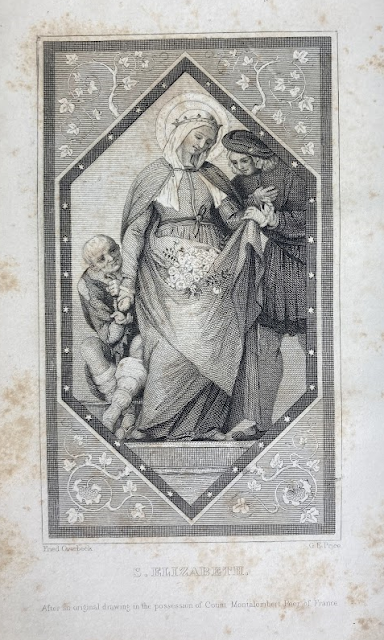 Melville’s image of red and white roses that used to be meat and bread alludes to a delightful highlight in the life of St. Elizabeth of Hungary, the miracle of the roses. The story is well told in a book we know Melville owned and commended to family members, The Life of Saint Elizabeth of Hungary:

Elizabeth loved to carry secretly to the poor, not alone money, but provisions and other matters which she destined for them. She went thus laden, by the winding and rugged paths that led from the castle to the city, and to the cabins of the neighbouring valleys.

One day, when accompanied by one of her favourite maidens, as she descended by a rude little path—(still pointed out) —and carried under her mantle bread, meat, eggs, and other food to distribute to the poor, she suddenly encountered her husband, who was returning from hunting. Astonished to see her thus toiling on under the weight of her burthen, he said to her, “Let us see what you carry”—and at the same time drew open the mantle which she held closely clasped to her bosom ; but beneath it were only red and white roses, the most beautiful he had ever seen and this astonished him, as it was no longer the season of flowers. Seeing that Elizabeth was troubled, he sought to console her by his caresses, but he ceased suddenly, on seeing over her head a luminous appearance in the form of a crucifix. He then desired her to continue her route without being disturbed by him, and he returned to Wartburg, meditating with recollection on what God did for her, and carrying with him one of those wonderful roses, which he preserved all his life. At the spot where this meeting took place, he erected a pillar, surmounted by a cross, to consecrate for ever the remembrance of that which he had seen hovering over the head of his wife.12

In humbly ministering to the poor Elizabeth did all the moralizing speaker asks in the second (or third, reviving “A Charm in Life”) segment of Rosary Beads. Through her generous and exemplary foodservice this princess did “live up to the Rose’s light” and duly received the promised blessing of red and white roses, unnaturally beautiful and magically transmuted from ordinary meat and bread. Faithfully narrated by Montalembert, the story of Elizabeth’s miracle roses is the poet’s unnamed exemplum in Without Price.

Posted by Scott Norsworthy at 8:21 AM