New York High Schools, Allan Melvill on Board of Trustees for 1829

From 1825 to 1829 young Herman Melvill (age six to ten) attended the New York High School where his father Allan Melvill eventually became a stockholder and trustee. Here Herman served as a student "monitor" and, as Allan Melvill reported to Peter Gansevoort in February 1828, "proved the best Speaker in the introductory Department."

Organized in 1824 by a group of well-to-do New Yorkers, it had quickly acquired over six hundred students. Its spacious three-story brick building, fifty feet by seventy-five, stood in Crosby street, a walk of five short blocks for the Melville boys. --William Gilman, Melville's Early Life and Redburn (page 28)

David K. Titus has more on Melville's early education at the New York High School in his article on "Herman Melville at the Albany Academy," published in Melville Society Extracts 42 (May 1980). 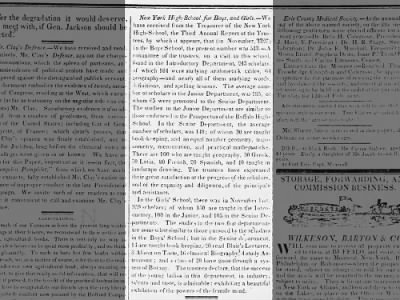 New York-High School for Boys, and Girls.--We have received from the Treasurer of the New York High-School, the Third Annual Report of the Trustees, by which it appears, that (in November, 1827) in the Boys School, the present number was 543.-- A committee of the trustees, on a visit to this school, found in the Introductory Department, 243 scholars, of which 184 were studying arithmetick tables, 64 geography--and nearly all of them studying words, definitions, and spelling lessons. The average number of scholars in the Junior Department, was 185, of whom 65 were promoted to the Senior Department. The studies in the Junior Department are similar to those embraced in the Prospectus of the Buffalo High School. In the Senior Department, the average number of scholars, was 148; of whom 30 are taught book-keeping, and an equal number geometry, trigonometry, mensuration, and practical mathematicks. There are 100 who are taught geography, 30 Greek, 70 Latin, 80 French, 20 Spanish, and 40 taught in landscape drawing. The trustees have expressed their great satisfaction at the progress of the scholars, and of the capacity and diligence of the principals and assistants.

In the Girls' School, there was in November last, 359 scholars; of whom 150 are taught in the Introductory, 100 in the Junior, and 105 in the Senior Departments. The studies in the two first departments are somewhat similar to those pursued by the scholars in the Boys' School; but in the Senior department, 14 are taught book keeping, 20 read Blair's Lectures, 8 Alison on Taste, 16 classical Biography, 4 study Astronomy; and a class of 20 have gone through a system of Botany. The trustees declare, that the success of the young ladies in this department, in industry, talents and taste, is admirable: exhibiting a beautiful exhibition of the powers of the female mind. --Buffalo and Black Rock Gazette, January 17, 1828.

In September 1829 (when Gansevoort and Herman were enrolled at the Columbia Grammar School), the Female High School continued to offer an impressive course of study in the Senior department, where young women could study (besides needlework and French) "moral philosophy, history, and belles lettres," and attend "lectures on astronomy, natural history and natural philosophy."
In 1829 and 1830, Herman attended the Grammar School of Columbia College with his brother Gansevoort. John P. Runden published two fine articles on the Columbia school in Melville Society Extracts:

Posted by Scott Norsworthy at 7:30 AM