The Butterfly's Ball and The Peacock at Home inspired a wave of illustrated books for children. In various forms these popular English books were soon available in America, too. The shorter text of William Roscoe's "The Butterfly's Ball" was reprinted early and widely in American newspapers and magazines. For one early instance, "Butterfly's Ball, and the Grasshopper's Feast" was reprinted on February 4, 1807 in the New York Weekly Museum. Roscoe's poem appeared frequently thereafter, for example in the Albany Balance and Columbian Repository on February 24, 1807; and the New York Weekly Inspector for August 15, 1807. In March 1808, New York printer and publisher David Longworth issued the first number of The Substitute with "The Peacock at Home" and "The Butterfly's Ball."

In Annapolis, the Maryland Gazette reprinted "The Butterfly's Ball" on April 23, 1812: 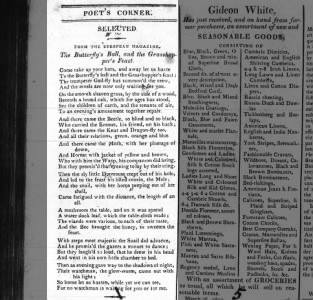 All of the popular English "toy books" shown below, courtesy of the fabulous Internet Archive, were advertised for sale in America by 1813.

The Butterfly's Ball and The Peacock at Home received extensive attention and praise in The British Critic for November 1807. The reviewer especially liked Peacock "as a specimen of playful wit conducted by genius, judgment, and taste." Soon enough, however, the same critic would lament the glut of imitations, satirized in The Congress of Crowned Heads. 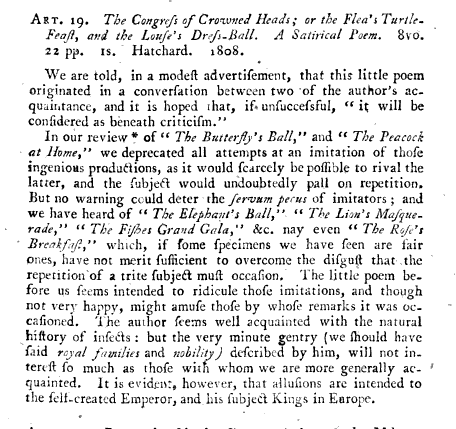 Posted by Scott Norsworthy at 1:10 PM