Mrs. Melville in the 1840 census, Lansingburgh

Ancestry has the 1840 federal census for Lansingburgh, New York with the household of Herman Melville's mother listed in due order after that of her neighbor and landlord William Knickerbacker. Census day was June 1, 1840. Seven other persons (numbered, not identified by name) dwell with Mrs. Melville, named as head of family with three males and four other females. Altogether, the 1840 census records eight persons, including the head of family. 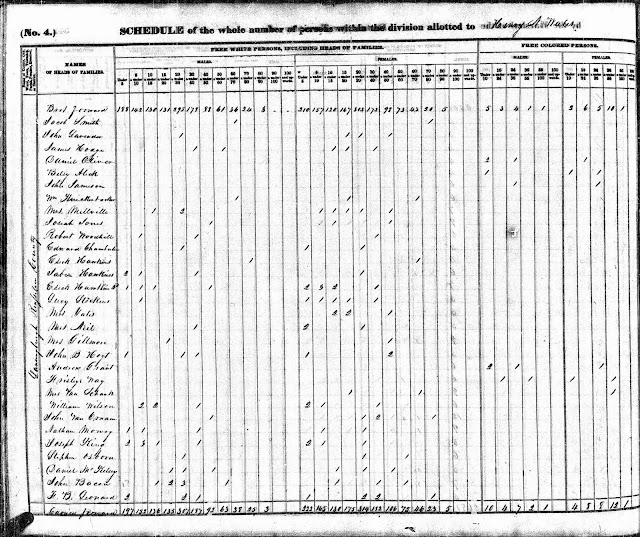 "Enumerators of the 1840 census were asked to include the following categories in the census: name of head of household, number of free white males and females, number of other free persons, names of slave owners and number of slaves, number of foreigners, and town or district and county of residence."

No one in the household is listed as employed. Apparently the census taker caught Herman Melville at home in Lansingburgh on June 1, 1840--just a few days before his trip west with Eli James M. Fly. The year before, Melville had sailed to Liverpool. He signed on for a whaling voyage in December 1840.

William H. Gilman looks at the 1840 census somewhere in Melville's Early Life and Redburn. I think he used it to figure out which of the two Knickerbacker properties was rented by Herman Melville's mother. While we're waiting to confirm what Gilman has to say, let's look at the age groups to see who might have been counted where. Hershel Parker notes in Herman Melville: A Biography V1.134 that Rosey (employed as Mrs. Melville's only servant) left the year before, in June 1839.

Posted by Scott Norsworthy at 6:39 AM